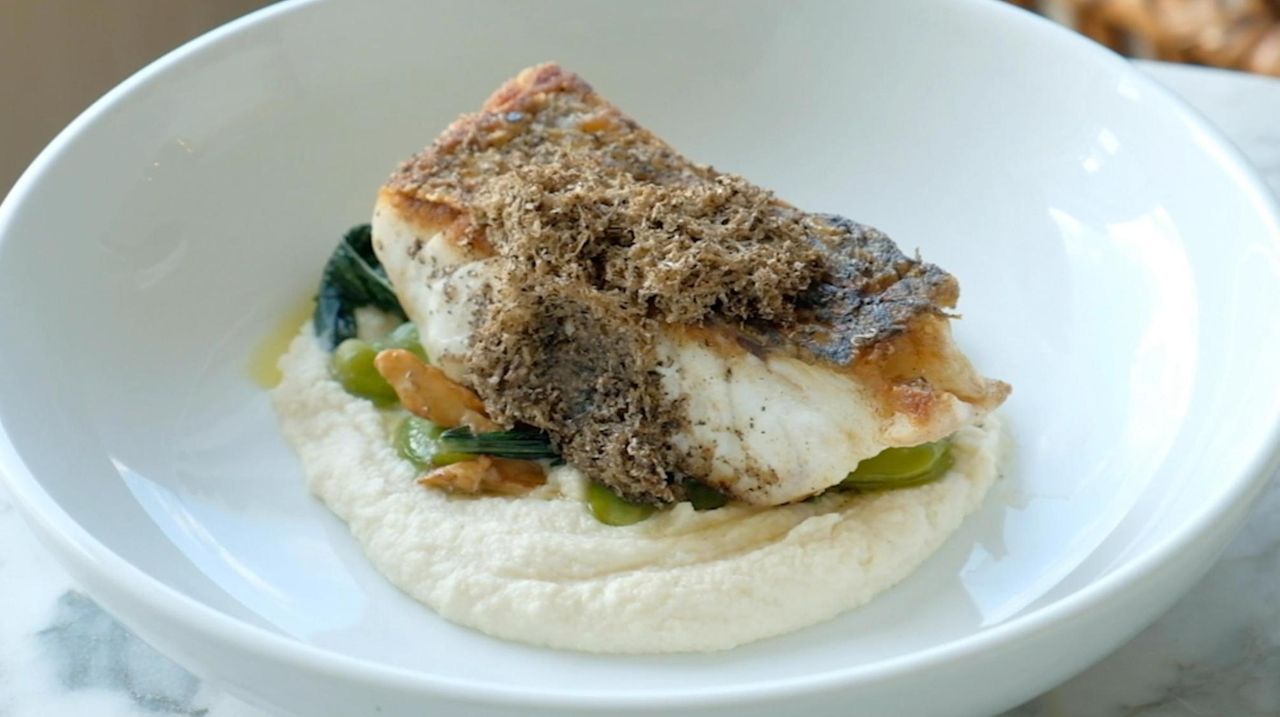 AMBIENCE: Depending on the dining room, modern and sleek or anchored in the 1950s, but many tables seem to float over the Sound

ESSENTIALS: Lunch, 11:30 a.m. to 3 p.m.; dinner, Sunday, Monday, Wednesday and Thursday 4:30 to 9 p.m., Friday and Saturday 4:30 to 10 p.m. (these are seasonal hours; if visiting in winter, double check on website). Dinner reservations strongly urged; major credit cards accepted; wheelchair accessible; parking both in front of hotel and across the street — but be careful crossing this busy road. Wheelchair accessible

For a long while, the starring role at Greenport’s Sound View hotel belonged to the view —  the sound spread out for miles in front of you, as seductive as (or even more so) anything on your plate.

That spotlight shifted earlier this year when The Halyard, as the hotel's restaurant is called, became the territory of executive chef Stephan Bogardus. When he was 27, the CIA-trained wunderkind (and Cutchogue native) had taken the reins at the North Fork Table & Inn after the passing of chef and mentor Gerry Hayden. Now 31 and with stints at places such as Per Se and French Laundry under his belt, Bogardus had doggedly taken over a place where fine dining is part of a bustling operation that also takes in a lounge, a piano bar, room service, a pool, and breakfasts and special events.

Would Bogardus change the place? Would it change him? The answer to those questions began one sleepy spring night inside The Halyard's slightly kitschy, mahogany dining room, one straight out of 1962. And it started with promise: a basket of petite, flaky Cheddar biscuits that made our table coo, followed by a platter of Oysterponds oysters, all sensual curves and brine. The first mic drop remains one of the most resonant: a chunky, ambrosial green-chickpea hummus dusted with za’atar,  which we smeared onto lavash crackers with the shattering quality of potato chips. On its heels was another feat: a warm salad of roasted heirloom carrots with velvety labneh and slick of chili oil, coriander sprouts emitting pops of vegetal spice.

It was then, I think, that the server began to disappear for long stretches, and the meal began to seesaw, as if the boat had hit rough seas. A lean, silken venison terrine laced with juniper shared the table with overly breaded baked clams through which I dug in vain for signs of flesh. (Most seem to have landed in the robust, dense clam chowder). Crisped duck breast dry-aged to beefy, funky flavor, and served over a mustardy hillock of cabbage, was leagues beyond a lobster and clam potpie whose puff-pastry top could be lifted straight off the skimpy slick of shellfish below. At dessert, a panna cotta with hazelnut praline and smear of berry compote, was pitch perfect, but both buckwheat crepes and a cheese plate were delivered straight-up cold.

This dinner felt sort of like a song trying to fight through radio static. And it was long — an early dinner had turned to a latish one, and while the sunset had been spectacular, returning here was an almost exhausting thought.

In May, I did. The dining room was full, and the lobster clam pie has disappeared from the menu. The house rendition of fish and chips, which during that first visit had stingy pieces of cod in a saltless beer batter, had grown in stature, prettied up by a luxe sauce gribiche. To add to the tableaux, Bogarduswas running plates out to diners; we wondered whether or not his smoldering good looks were intentional ambience. Some plates needed no chefly escort, though, such as a vaguely Peruvian-style scallop ceviche beneath finely sliced avocado, a diaphanous thing suspended between citrus and heat. Or charred local asparagus bearing a custardy egg, vibrating with spring. But also, this: shapeless, textureless butter-poached fluke over limpid white asparagus, absent of joy. Those buckwheat crepes had improved — their caramel sauce was worth licking from the plate — but like the first meal, bewildering gaps in service made dinner a test of endurance.

In late June, I returned, this time dining on the terrace with a stiff wind whipping napkins about. Lunch is the only time you can land the Halyard’s lobster roll — a creamy version somewhat diminished by a ratio of too much toasted bread to too little lobster — but it arrived a full 20 minutes after a “fish BLT” of slithery, undercooked monkfish with rubbery bacon on a soggy bun. The server blamed the delay on a runner and the manager on new kitchen staff; she insisted on comping the lobster roll, which was unnecessary, but we knew she knew the kinks were still being worked out.

The Halyard seems like a place suspended by competing forces and urges — the past and the present, ambitious specials and crowd-pleasing standards. Bogardus may be working a long-term vision — more vegetables, clearly, as well as brighter and more delicate flavors — but a restaurant is more than its executive chef, and the cogs in the Halyard wheel are still finding their groove.

Correction: Stephan Bogardus is the executive chefof The Halyardin Greenort. His name was mispelled in a restaurant review in Friday's ExploreLI, which is printed in advance. 7/12/19