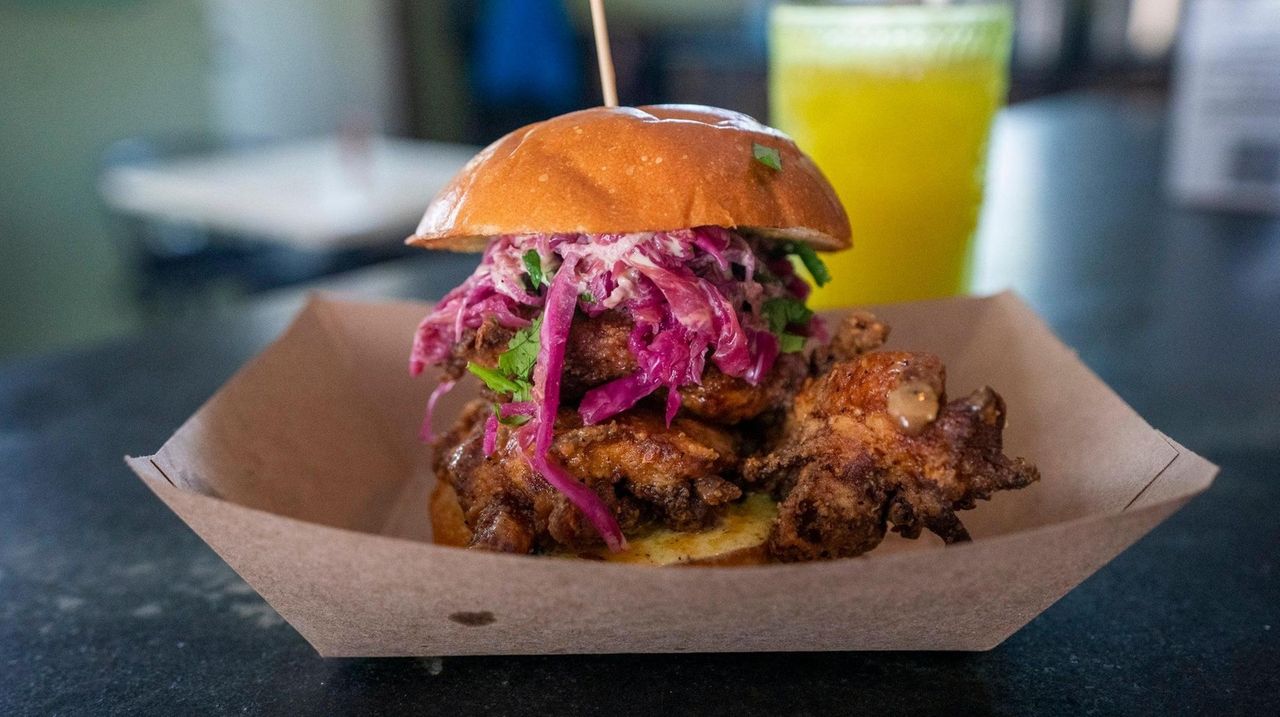 For the East End, 2020 was the year of the gold dust bowl migration, the pinot grapes of wrath, the year that summer started in March and never ended, when rich and ridiculously rich alike fled Manhattan via limo, copter, jitney — anything capable of safely ferrying émigrés to land’s end. With them came Jimmy Choo pop-ups, same-day delivery from Sak’s, truffle shortages at Citarella, packed private schools, bidding wars over quarantine mansions and, inevitably, traffic-choked roads and a bit of tension with the locals.

And thanks to vaccines, relaxed travel restrictions and pent-up demand, this summer could be even bigger out east. Indeed, everything will be bigger, everything save the stubbornly two-lane roads you'll need to crawl along to get there.

So what’s a regular ol’ Long Islander to do? Two words: go now. For the beauty and relative sanity of the pre-Memorial Day east, for traffic that moves slowly but at least it moves, and for your best chance at enjoying the below East End hot spots, along with some terrific menu options.

This Sag Harbor favorite’s creations, too extravagant for a moniker like doughnuts, sell out daily even during the offseason, though Kyle Sanderson’s shop assures that pre-summer lines are indeed shorter. Grindstone’s sinkers are tall, formidable and well-near impossible to get your jaw around, but each is a bold feast for flavor lovers, none more so than the inner tube-sized lemon poppy ($3.50), whose pearly shell coating is packed with lemon oil/juice/zest, a citrus treat without peer. Not decadent enough for you? Let us introduce you to what Grindstone calls its "summer signature," a hedonistic handful known as Nutella S’mores ($5). It’s just what it sounds like — toasted marshmallow center, eponymous hazelnut frosting topped with graham cracker crumbs — but beautiful as all get-out. And while doughnuts are part of a healthy breakfast for no one ever, Grindstone deserves applause for its conscientious ingredient list, which somehow manages to make fried dough both organic and local. Not surprisingly, its java boasts its own eccentricities (e.g., peanut butter mocha, honey lavender latte), but beans roasted in-house bring quality to everything Grindstone brews.

The much-coveted and festive patio (some of it tented) is a can’t-miss element at this upscale Greek establishment, though you might be forgiven for thinking otherwise at sunset, when clever, and cleverly named, cocktails from the bar (try a Mexican Bus Ride, $15) are bathed in the amber glow of magic hour. So are the patrons, an eclectic mix of celebs, posers and regular folks that make this Water Mill restaurant, which debuted in 2017, a people-watcher’s dream. (Word is, Broadway types regularly show up to keep their voices in tune on a makeshift outdoor stage.) But the food can be dreamy too, especially in the mezze/appetizer department.

Chief among these is a deliciously otherworldly avocado tzatziki ($14), which is the preferred destination of vegans and Calissa’s housemade pita, although the addictive zucchini chips ($19) will happily dip their way in that direction as well. The tzatziki is a determined fusion of ingredients united by their freshness, something also celebrated in the pork and chicken souvlaki platters (both $28). And anything fishy is likely a winner as well, all of it served simply, like the branzino filet ($34), which needs only lemon and a side dressing of olives and greens for completion.

Most East Hampton eateries go in and out of fashion, but not this landmark, which opened in 1988 and has played to mostly packed houses ever since. And yet there’s a surprising intimacy and casualness to the place that is perhaps best appreciated before summer arrives and necks crane automatically whenever a somebody checks in at the host stand.

It’s easier to snag a table now too, of course, and easier too to linger over a pot of N&T’s wood-fired mussels ($20), buttery and uniquely smoky in a way that both Prince Edward and his island might find revelatory. The restaurant’s quietest evenings are Sunday through Thursday, which are also the only evenings you can try the kitchen's top-drawer pizzas — yes, we’re recommending you order pizza at Nick & Toni’s — all of them boasting a crust that is both thin and soft yet sturdy, along with enchanting flavor combos from chef Michael Zuckerman that will having you thinking anew about the possibilities of pie. Case in point: the salsiccia ($21), in which the salty goodness of sopressata squares off against hot honey on a playing field of molten mozzarella. (Spoiler alert: you win.) But this is a menu full of treasures, all of them showcased by that rarest of things: a see-and-be-scene restaurant that transcends the hype.

Crowds and parking issues are the price of popularity at this no-reservations Aquebogue gem, a nearly-two-year-old eatery run out of a handsomely rebuilt farmhouse by the husband-wife team of Kyle Romeo and Amanda Falcone — crowds you will want to beat for the chance at two irresistibly good sandwiches. Barrow buffs go nuts, and rightly so, for the fried chicken on a sesame brioche ($12), in which an uber-crunchy golden batter houses a thigh-meat-only plank of juiciness fringed with purple cabbage slaw and chili butter. In a world overrun by fried chicken sandwiches, this one stands apart.

Equally fine: a horseradish-encrusted roast beef number on toasted, buttery sourdough ($15), an inspired amalgam of garlic mayo, pepperoncini, melty provolone and greens, many grown just a stone’s throw away at Cedar Grove Farm, which happens to be run by Amanda’s parents. Barrow’s cheerful fare pairs well with its atmosphere both indoors — where a few tables and a beautifully designed counter area bedecked with pressed tin and tile frame a busy open kitchen — and out. Meals taken on the porch or at shaded picnic tables are simple yet dignified, especially during Barrow’s quiet (fingers crossed) late afternoons.

Both the smartly-dressed crowd and chic atmosphere at this Greenport hot spot might have been airlifted from Manhattan’s Upper East Side, but the friendly service and straight-from-the-bay shellfish are distinctly North Fork. With just 11 tables in the dining room (plus some outdoor tables hitting the sidewalk later this month), reservations can be hard to come by, but charming the Resy gods is worth it for the superb Peconic oysters "friskafella" ($21), chipotle-spiced mollusks baked with spinach and topped by a caramelized Parmesan aioli that ought to be the envy of every Rockefeller. And if there’s any more persuasive argument for local fowl than the restaurant’s Crescent Farms duck breast ($40), we haven’t seen it. A finely seared crust gives way to pink meat lent delightful assistance by the syrupy tang of Bing cherry sauce. That and a side of spaghetti squash roasted with creamy Taleggio and dusted with garlic breadcrumbs ($13) sends this duck into the stratosphere.

Up front, the classy and compact bar area’s windows open on to busy Front Street, but the dining room — thanks to sound-absorbing fabric panels and the dim yet soothing illumination of wall sconces — feels far from the madding crowd, the atmosphere a winning mix of romance and refinement.

There’s nothing friendlier or more satisfying than an evening spent at this stalwart’s racetrack-sized oblong bar perched on the edge of Greenport harbor, but seats can still be hard to come by. There are tables too, of course, but this branch of the Claudio’s conglomerate is best appreciated while eavesdropping on bar talk and quaffing a dockside lemonade ($14), a cocktail of dependable potency and even a little subtlety despite the unassuming name. (Credit the minty accents — as in Ketel One Cucumber Mint — and elderflower liqueur.)

Not all the bar favorites are libations, however. Plates of Little Neck clams on the half-shell ($ 22/dozen) and North Fork oysters ($36/dozen) have a winning straight-from-the-ocean brine belied by Claudio’s arrrgghhh-pirate décor, although on chilly spring evenings you’re better off steaming your clams ($23), which arrive in a cobalt blue pot, bathed in garlic and white wine. Still, it’s the people — the heady mix of locals, tourists and a seemingly endless string of bachelorette party celebrants that keep this place fun, interesting and full of life. (111 Main St., Greenport, 631-477-0627, claudios.com)