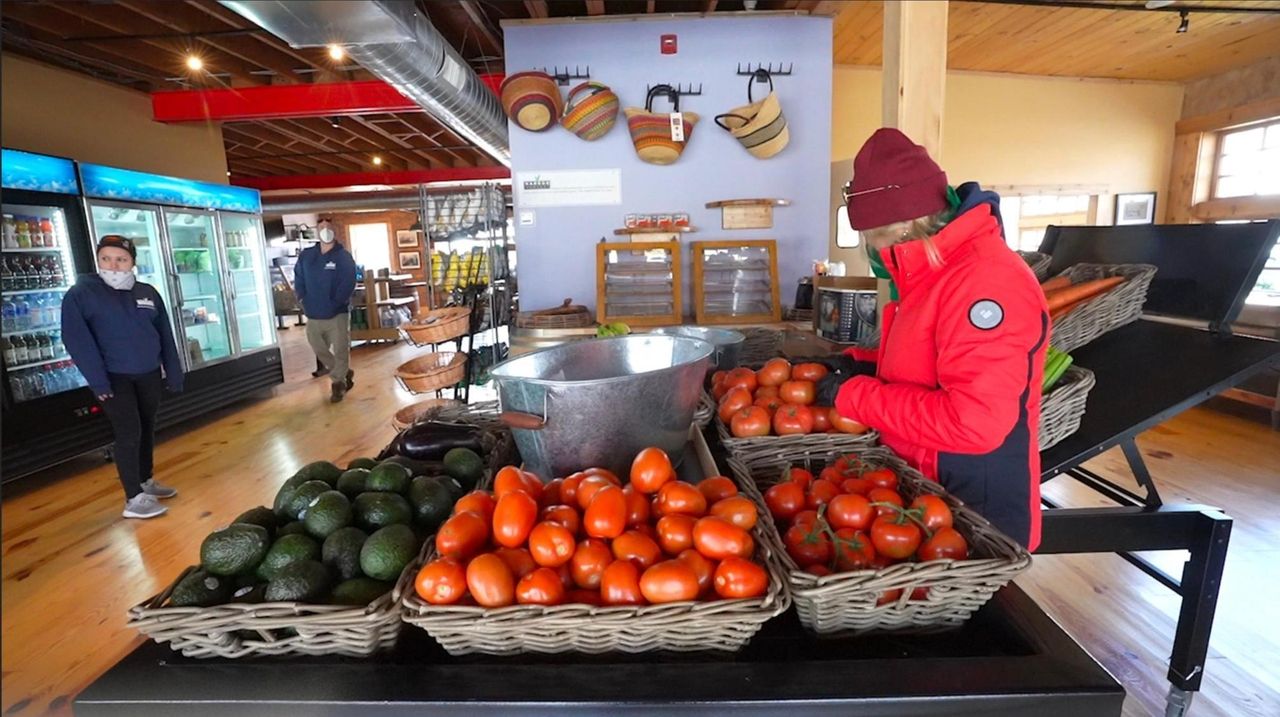 Harbor Harvest, a Connecticut-based market that sells meats and dairy from small, local farms and groceries from artisan producers, opened its first Long Island location on April 25. Rather than using truck deliveries, products are transported to the Huntington store across the Long Island Sound from Norwalk, Connecticut via a lithium-battery-powered hybrid catamaran, as seen on April 23. Credit: Randee Daddona

As Harbor Harvest stocked its selling floor to prepare for opening day on Saturday, it received no truck deliveries. Instead, all the merchandise was conveyed to the Huntington store by a lithium-battery-powered hybrid catamaran that came across the Long Island Sound from Norwalk, Conn., where the first Harbor Harvest opened in 2016.

Bob Kunkel, co-owner with his wife, Marilyn, also captained the craft, maneuvering it smartly alongside the dock behind the store. Except for the restaurant, Prime, a block north, the waterfront in Halesite, this tony quarter north of Huntington Village, is occupied by boatyards and marine suppliers.

With the help of some mates, Kunkel hooked a 3,000-pound cargo box to a waiting crane that swung the box into the parking lot. A forklift conveyed the box into the warehouse and soon employees were unpacking the pallets and transferring their contents to the adjacent modern-rustic retail shop where they were promptly shelved.

The goods themselves evinced the same sustainable vibe: produce, meats and dairy from small, local farms, groceries from artisan producers and prepared foods and baked goods made on the premises.

For Kunkel, a marine engineer and builder of sustainably powered watercraft, the Huntington store represents the second phase in an ambitious plan to help local farms while relieving road congestion and returning freight to the water.

"The trip from Norwalk to Huntington could take a truck anywhere from three to six hours," Kunkel said. "On the catamaran we do it in an hour and ten minutes.” The catamaran is also a good neighbor. “No one wants to smell diesel, see smoke or hear noise around their $8 million home.”

For now, the merchandise mix has a definite Connecticut slant, with vegetables and eggs from Millstone Farm in Wilton and coffee from Strigo in Norwalk, but he is hoping to fill the shelves with Long Island produce. “We’ve pretty much exhausted Connecticut farms,” he said. “We have a lot of meat and dairy we are bringing from Connecticut and the Hudson Valley, but we are already buying Long Island seafood and we are looking forward to meeting farmers from the North Fork.”

Kunkel noted that, for many small farms, “transportation is a big issue. Typically their sales radius is 10 miles. They don’t have the vehicles or the refrigeration or the staff to move their stuff.” Harbor Harvest is prepared to pick up produce from farms though, sadly, this cannot yet be accomplished by boat.

Initially the warehouse attached to Harbor Harvest’s store will serve its own retail operations, but in the future Kunkel hopes to sell to Long Island restaurants and markets. (Prime and Crew, across the street, had both expressed interest before their operations were abridged by the coronavirus.)

In addition to fresh produce, meat, dairy and small-batch groceries, Harbor Harvest has a coffee bar and a full kitchen that, under the direction of chef Suzanne Schmitt, prepares salads, soups, sandwiches, sweets and more. (Daily menus and specials are posted on Harbor Harvest’s Facebook page.) For the time being, you can also find bleach, paper towels and toilet paper.

“It’s not ideal, opening a store in a pandemic,” Kunkel noted. “But we are determined to be a safe place to shop. Everyone gets a temperature check and scrubs in. We will be limiting the number of customers who come into the shop, or you can call the store, we’ll shop for you and bring it out to your car.”