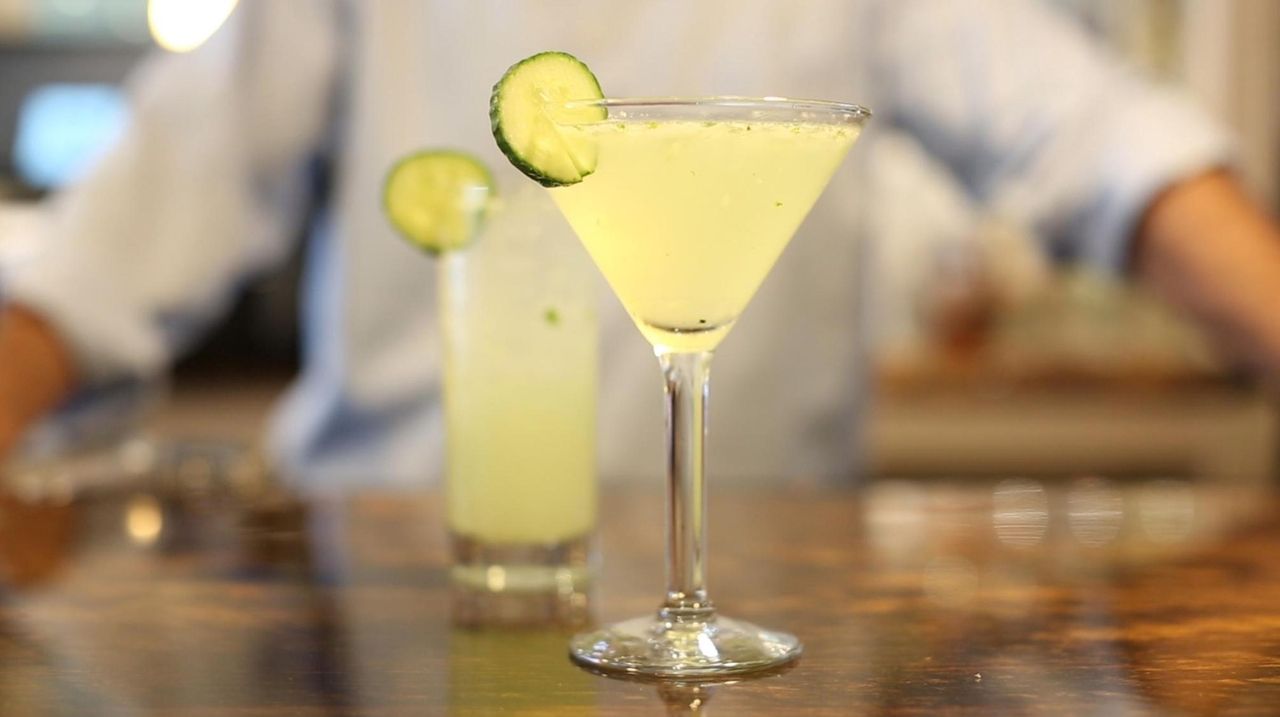 Harbor House Northport co-owner Kevin LaPrelle on Saturday talked about "wearing out the sidewalk" back and forth between the restaurant and Bistro 44, another restaurant he runs, which is 60 feet away, all while mixing one of his drink specialties, the salty whale. Credit: Yvonne Albinowski

There aren’t many restaurants for which emptiness is a virtue, but Harbor House is one. The new Northport eatery pairs best, it seems to me, with languid afternoons. It’s a place for having one too many Manhattans with a fun cousin over a scrumptious warm spinach salad dressed with pickled onions, walnuts and goat cheese, even as you learn that Grandpa Bill is not your aunt’s real father, and no wonder she's the only blonde in the family. It’s a place to admire diaphanous ceiling fans swirling overhead — this really is the golden age of restaurant breezing, no? — and crisp-aproned, expectant servers standing at the bar as Harbor House’s first dinner patrons are seated in its homey dining room.

Best to celebrate the last of these quiet, halcyon moments with the avocado and grilled shrimp, a truly fine small plate and something of a gastronomic “Star is Born." Ordinarily, you tell the table, shrimp is the uncontested cynosure, its lime-green escort silently standing by, unnoticed. But a splash of beurre blanc, prepared not with wine but Champagne, has the fairy-dust effect of reversing their roles: The avocado mesmerizes, while the shrimp disappears into the background.

It’s fitting perhaps that the last statement has a whiff of the ludicrous, as it might be the last thing your cousin — or indeed any of your tablemates, once Harbor House reaches capacity at around 6:30 or so — may ever hear. Restaurateur Kevin LaPrelle intended the popular, efficient seafood eatery as a less formal answer to his own Bistro 44, which sits a stone’s throw away on Main St, with executive chef and partner Jose Morales presiding over both kitchens. Handsome though it's chocolate and beige interior is, however, Harbor House's most notable achievement, however, may be its knack for making a crowd of 30 sound like 60. It’s an acoustical feat equaled only by Carnegie Hall and the world’s finer opera houses, none of which, it should be noted, serve seafood.

Is it a coincidence that the baked oysters now arriving at your table are also victims of overcrowding? Forced to share a shell with spinach and blue cheese, and then endure a heavy rain of Pez-sized pieces of bacon, the modest mollusks get lost. So does your voice amid the growing crowd — which becomes obvious after you’ve shouted “PEZ” three times to your companions — and at such moments you might reasonably fear that your perfect afternoon spot is morphing into an evening nightmare.

Such is far from the case. There will be many moments over the next hour or so in which you will gasp with pleasure at the food, as when your ahi tuna poke plate arrives, a brightly flavored cuboid of fish and mango tossed with wasabi aioli and surrounded by a sunburst of triangular chips, or when a perfectly cooked filet of sole seems to float to your table from heaven. But the pleasure will be of the private, unshareable kind. By the time my own sole landed one evening, along with an equally respectable salmon burger topped with a domino fall of sliced avocado, the elderly couple with whom I was dining had already angrily switched off their hearing aids in protest of the din, a situation that did not augur well for either her veal scallopini ("too salty") or his seafood risotto ("Where are the scallops? All I see are squid.")

Another night I distracted myself from the clamor by diving single-mindedly into the pan-seared ahi tuna, a generous plank that had received expert grill treatment. So why did I eventually douse the whole thing in vitriol and rail about the poor decision to drape tuna across mashed potatoes, bleating loudly about the folly of arranged marriages? I blame the noise.

Judged purely on the strength of its kitchen, Harbor House can be a satisfying endeavor. Its service is exceptional, its dishes don’t often disappoint. Indeed, the main thing holding it back is the experience of dining there, something that I hope LaPrelle and company will fix by infusing the nighttime rush with a little afternoon sleepiness. Evenings out are for enjoying great food, yes, but also for celebrating that food with others, luxuriating in public privacy, and, if you play your cards right, learning the truth about Grandpa Bill.