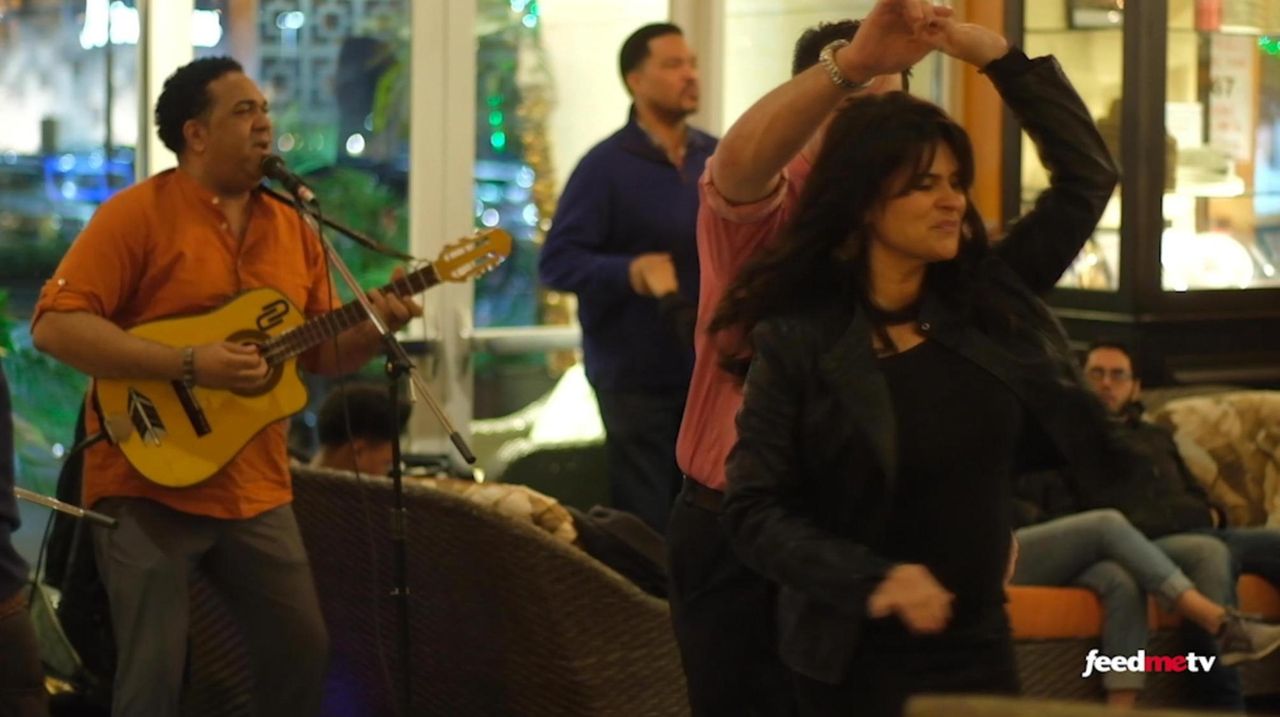 "In our culture, music is pretty much everything," says Juan Carlos Gomez, manager of Havana Central, a Cuban chain in Garden City. In addition to serving classic Cuban dishes, the restaurant offers live music and dancing four nights a week.  Credit: Daniel Brennan

SERVICE: Never quite prepared for the crowds

In my 15 minutes at Havana Central, a ceaselessly bogus take on Cuba’s pre-revolutionary days, I’ve speculated that ropa vieja is Spanish for tough pot roast, likened an “ultimate mojito” to gently spiked Sprite, and brooded on what the wild, unearned popularity of its fried avocado wedges says about who we’ve become as a people. Basically, I’m ruining everyone’s night.

“Great, now nobody’s eating the fried avocados,” says a steaming tablemate over the sound of distant bongos. What everyone else but me knows: Havana Central is for pretend Cuban and pretend palm trees, pretend frivolity under indoor party lights — and there’s nothing wrong with that. Especially if it takes away the sting of winter’s chill.

The insinuation stings too, at least until the arrival of what first appears to be a meteorite — based on its crash pattern on the plate — but turns out instead to be the wreckage of a braised pork shank that burned up upon re-entering earth’s atmosphere. The landing was a soft one, cushioned by a slurry of yuca root puree and a seriously deep pool of red wine reduction, a Bay of Pigs if you will.

My 79-year-old father, ignoring all the spleen-venting, changes out of his loafers and into orthopedic dancing shoes “so I can spin without skidding.” As if on cue, Mambo Loco, a band that plays Havana Central on select nights, marimbas and maracas its way into a wickedly infectious tune. You’re going to salsa? I ask in a voice filled with fear that Dad will spin into one of the congas. “Salsa and sing at the same time,” he replies, grabbing his wife and heading for a small, heavily trafficked area near the band.

It was in Manhattan in 2002 that Havana Central opened its first “portal to Cuba’s golden era,” as the website puts it, later sprouting three additional tristate portals, including our own, which opened in 2013 and sits adjacent to a portal to Roosevelt Field mall. The dining room is a tribute to a time “when life on the island paradise was a continuous party”— except for, you know, the occasional attempted coup or assassination — and “Ernest Hemingway could walk in any minute and belly up to the bar.” When, that is, “he wasn’t in the mall sharing pepperoni pretzel nuggets with Scott Fitzgerald and Gertrude Stein at Auntie Anne’s,” I tell the table. And just like that, I’m ruining everyone’s night again.

A large plate of calamari arrives while Dad’s dancing, and the shoal of squid responsible has not died in vain. The breading is light, well-seasoned, crunchy perfection. The ceviche acquits itself nicely too with firm shrimp tossed with avocado, both quite happy with the citrusy, oniony marinade.

To a point, the vaca frita succeeds too, its shredded steak both crispy and powerfully flavored. But the dish also suggests a kitchen that’s attempting a coup of its own, against Havana Central’s menu. Told by a server to expect heavy notes of spinach and cilantro in the large mound of green rice on my plate, I discover instead a Devil’s Tower of flavorlessness. The “jumbo” shrimp in garlic sauce look like 26/30s at most, crispy fried pork arrives sans chimichurri, plantain chips with a garlic mojo sauce utterly devoid of mojo, and chocolate paradise cake drowning in an unadvertised, unwelcome caramel sauce redolent of, yup, paradise lost.

A smattering of applause is heard, after which Dad returns to the table to sup. Other than the flan, respectable in its own way, he doesn’t seem to enjoy the food any more than me, yet wears a smile bigger than Desi Arnaz in the “Babalu” days, and he’s not alone. Nobody at the table cares much for what they’re eating, and nobody cares about not caring. It’s all very unnerving.

“I’m all about having a good time, but do we have to check our palates at the portal?” I venture. The table takes this in for a few seconds but says nothing. “Am I right?” Nothing. I sense a junta forming, at which point Mambo Loco fires up the congas again and Dad drops his flan spoon.

“I’m dancing,” he says, bolting from the table and heading toward the band.