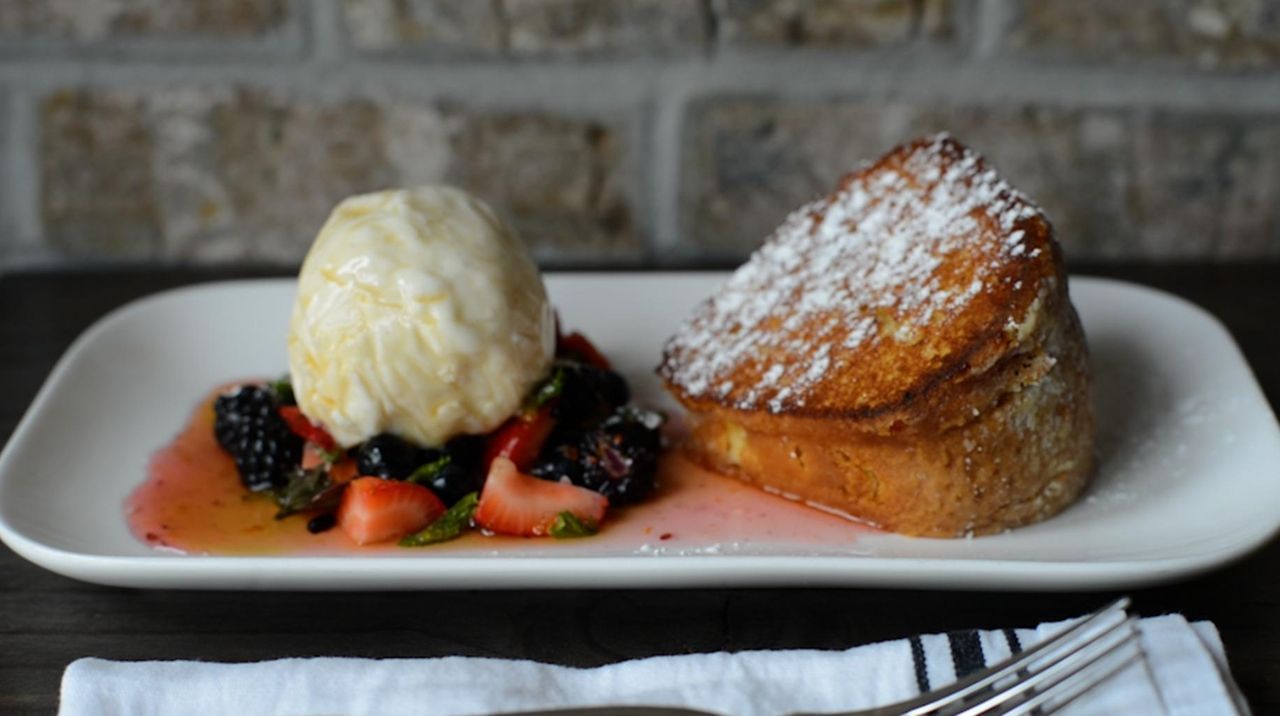 Daniel Kitson, owner of Henley's Village Tavern in Brightwaters, talked on June 16, 2017, about his vision for his restaurant, small but boisterous and high-energy. He changes his menu with the seasons, right down to the cocktails. Credit: Daniel Brennan

AMBIENCE: A cozy, woodsy room with quirky touches and a three-sided bar that is stocked to the ceiling.

When assembling a puzzle, the vivid colors and shapes of the border come together first, building suspense for the finished scene. If there are missing pieces — maybe under a chair — the puzzle can remain frustratingly unfinished, but rich with potential.

Eating at Henley’s Village Tavern feels sort of like that. At first glance, the place is utterly lovable: Behind a brick-and-glass facade decked out in hanging flowers is a cozy, woodsy refuge where the servers are unfailingly sweet and attentive. But then, there is that frustrating absence at the center — in this case, on the plate — and it leaves you unfulfilled, hoping the missing pieces eventually fall into place.

For decades, this storefront at the heart of quaint Brightwaters village was a no-frills bar, the Toddler House, which closed last year. The space drew the interest of Daniel Kitson, former owner of Mighty Quinn’s and Declan Quinn’s in Bay Shore, and a guy with a vision for an intimate neighborhood gastropub.

Kitson nailed a rustic, polished ambience during a six-month gut renovation. He also hired John Fischer, who has been a chef at Declan Quinn’s as well as a few other local New American spots, such as Left Coast Kitchen in Merrick.

Accordingly, Henley’s menu is dense with pub classics — burgers, fried appetizers and meat-centric entrees — plus a “Scratch” menu that changes a few times each week to highlight seasonal ingredients.

Alcohol is never out of reach here; one side of this room is given over to a three-sided bar that’s stocked to the ceiling, and Fischer is fond of spiking sauces with beer and booze. Kitson’s wife, Michele Kitson, is behind Henley’s succinct craft-cocktail list.

Occasionally, the food can be punchy but soothing, as in fried haricot “frites,” green beans encased in golden ale batter and lounging in velvety beer cheese. A creamy potato soup, laced with bacon and sour cream, exudes comfort. A tidy rectangle of striped bass, its top charred, comes perched atop a summery, corn-studded succotash, among the most artful of the dishes here.

Yet dinner can be a bumpy, unpredictable road. The deep fryer is in heavy use, and fried batter (or breading) that was charming the first time reappears in many unhappy forms, falling away from too-hard pickles or entombing greasy rings of Granny Smith apples whose coating is flecked with cinnamon.

Other times, the chef overadorns to a fault. A roasted beet bruschetta is quite un-bruschetta-like, delivered on a hulking piece of bread somewhere between focaccia and a hero. Though the beets themselves are sweet little jewels, the entire thing is smothered with globs of fresh, ricotta-esque cheese and a zigzag balsamic reduction, plus the odd touch of whole almonds.

The pub’s signature burger, a tower (literally) of beef, bacon, melted Cheddar and crispy onion strings, was so enormous that I tried to smoosh it down with the heel of my hand in a vain effort to bite everything at once. When I did (almost), I discovered that the meat, ordered medium-rare, was well done and much too lean to withstand flame.

One night, our group’s eyes lit up at the menu’s mention of Nashville-style “hot” fried chicken. It looked majestic: a coral-crisp hunk of boneless meat with a moonscape coating of nooks and crannies, prickling with spice. Yet its hillock of mashed potatoes and wilted spinach seemed out of place, like trying to dress up a country crooner in a suit and tie.

A surf-and-turf mac — a cast-iron crock of cavatappi smothered with cheeses and tumbled with beef and breadcrumbs — was overpowered by the shrimp in its midst. A Guinness-braised brisket was dry in parts and suffering under a plodding sauce. Among the biggest disappointments was a rack of lamb — actually, two half-racks arranged into sort of a lamb steeple — cooked to leathery toughness.

Bright spots pepper the meal: charred green beans alongside that tragic lamb, or perfectly sweet, crisp carrots with the brisket. An excellent kale salad, showered with minced egg Parmesan, that has shed all bitterness. Masterful sauces, from tangy aoili to brooding jus. Or a dessert for the ages: bourbon-spiked maple sauce underpinning a browned, bourbon-soaked butter pound cake that is swoonworthy.

Despite Henley’s charm, there are missing pieces when it comes to the food. For those who come here to drink, snack and hang out, it likely doesn’t matter. But the kitchen needs to pare back and focus on its strengths if it wants a devoted dinner crowd.