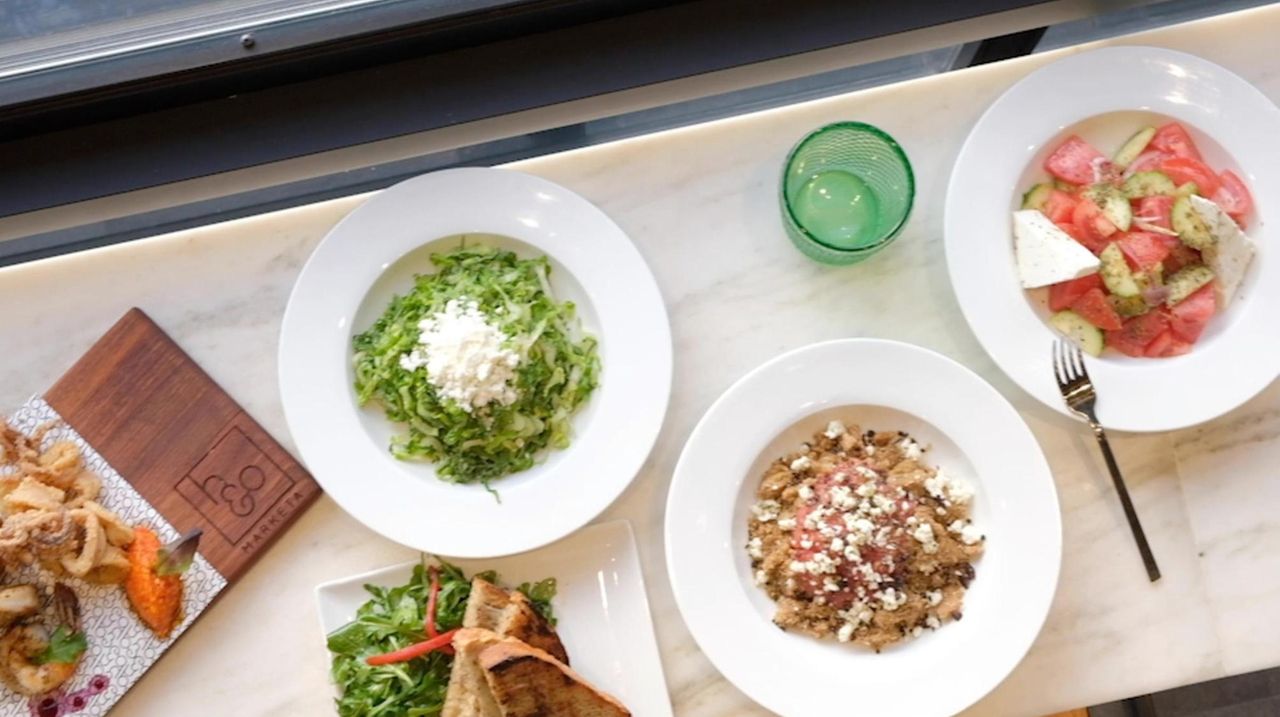 Julia Petropoulos, managing partner of Herb & Olive in Manhasset, gives a tour of the restaurant-cafe-market that proves just how refined and approachable homestyle Greek cooking can be.  Credit: Daniel Brennan

SERVICE: Excellent all around

The Greeks, who gave the West democracy, philosophy and science, are not well served by the local dining scene.

With a few exceptions, Long Island’s Greek eateries fall into two categories: high-end fish palaces and, for want of a better term, souvlaki joints. What falls between the cracks is the soul of Hellenic cuisine, which, in its country of origin, is characterized neither by whole, grilled fagri for $40 per pound nor by prefabricated gyros topped with shredded iceberg and pink tomatoes.

Enter Herb & Olive, a combination restaurant-cafe-market that proves just how refined and approachable homestyle Greek cooking can be.

“Casual elegance” gets thrown around a lot when describing restaurants, but it defines Herb & Olive, whose managing partner Julia Petropoulos imbued every square inch with beauty. Most elements — weathered marble tabletops, fine China, custom-milled cabinetry, generous dish-towel napkins — are shades of white, with lots of rich wood accents and pops of jade green glass tumblers. Yes, the dining room is in the back of a market, but the market, with its spare, open shelving suspended from wooden ceiling rafters, is better looking than most restaurants.

Painted in black on a pickled brick wall, a rendering of an ancient olive tree dominates the dining room, as the oil of its fruit informs the menu. Unlike the souvlaki joints that douse mesclun salads with balsamic vinaigrette, Herb & Olive knows that fresh and fruity extra-virgin olive oil is the sine qua non of Greek salads. The two best known are here perfectly rendered: the lettuce-less horiatiki (“village”) salad of chopped cucumbers, red onions and tomatoes (top-of-the-line “Lucky” brand that taste like tomatoes) topped with a slab of feta, and the prasini (“green”) salad, a pile of delicate shreds of romaine and dill. Do not overlook the dakos salad, an almost comically unprepossessing dish of dampened barley crackers covered with grated tomatoes, crumbled feta and, in a nod to the 21st century, dehydrated olives. It is simply sensational.

Legumophiles: Make sure you order the fava, a silken, olive-oil-rich puree of yellow split peas topped with sweet red onions. (Do not ask me why it is not made with fava beans) The tender, grill-kissed bread that accompanies the fava is made with zea, an ancient form of wheat also known as emmer and spelt.

I encountered the fava at dinner as the base for a smoky octopus tentacle on the fish board, a changing selection of three seafood preparations. Our octopus was flanked with three enormous, grilled shrimp, bursting with flavor, and a tangle of fried calamari. The meat board that night was every bit as good: two juicy lamb loin chops, a length of loukaniko, the aromatic Greek pork sausage, and bifteki, meatballs sitting on a tuffet of tangy tzatziki.

The lunch menu offers a selection of sandwiches and savory pies, the highlights of which were grilled kefalotri cheese with black truffle spread on more of that good zea bread, and the worth-learning-how-to-pronounce kefalonitiki kreotopia, a hand pie filled with beef, rice and potatoes scented, hauntingly, with cinnamon and the barest suggestion of cloves.

It’s hard to do justice to these dishes in writing because chef Michael Giannkis’s main talent is buying the best ingredients and doing very little to them beyond judicious seasoning, precise cooking and generous application of olive oil. Modesty is a singularly underrated quality that few chefs possess.

While Greece is a starting point for Herb & Olive, the menu — and the imaginative and affordable wine list — wander around the Mediterranean. Petropoulos is particularly enamored of Spain, its fine hams and sherries that have no real equivalent in Greece. The market also has a small selection of Spanish provisions, though they are drowned out by the sheer profusion olives, dried beans, dried fruits, condiments, snacks and desserts imported from Greece (many of which I have never before seen in the United States).

If I lived in Manhasset (heck, if I lived in Great Neck, Port Washington or Roslyn), I’d be at Herb & Olive for my breakfast shakshouka (eggs poached in a sauce of tomatoes and peppers), my lunch sandwich of Spanish ham on a ficelle, my afternoon snack of cookies and coffee (weekdays) or a glass of wine and jamon Iberico (weekends). If I ate dinner elsewhere, I might well come by for a nightcap of Metaxa, the great brandy that is just one more gift of the Greeks.