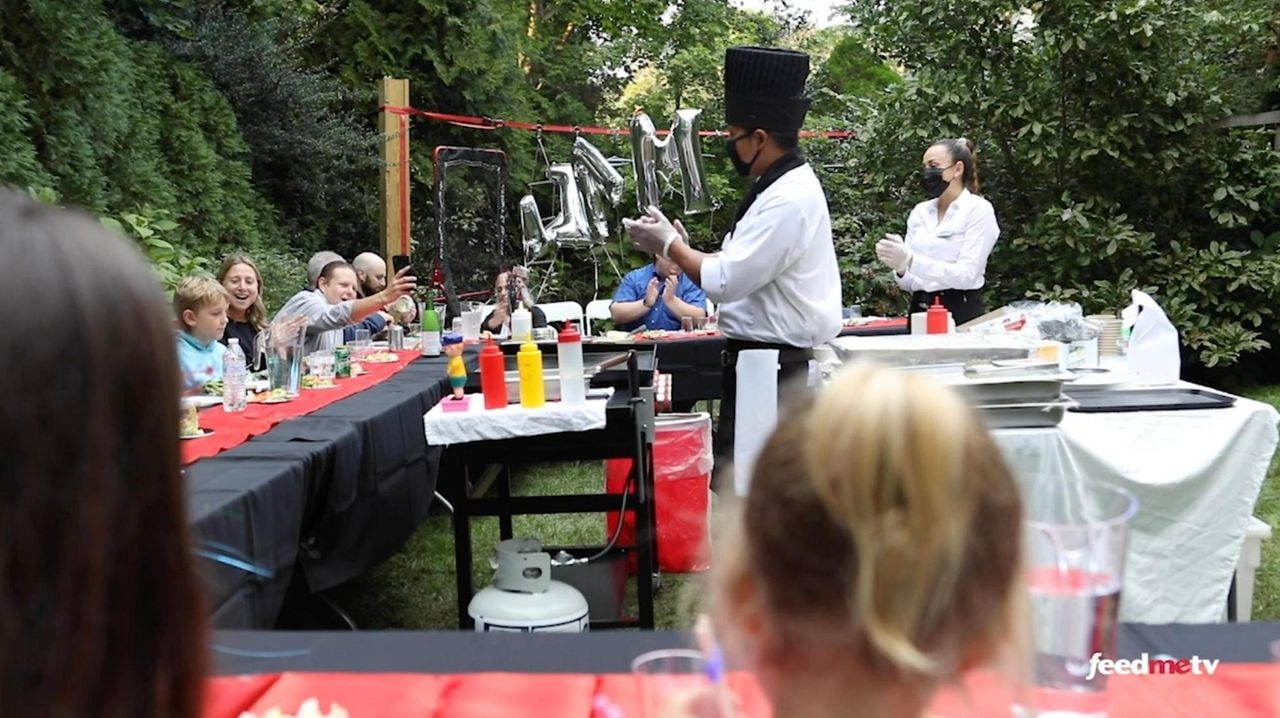 Liam Levine always goes to hibachi for his birthday. With the pandemic, his mom, Jordana, didn't want to take the risk of going to a restaurant but also wanted to find a way to celebrate her son's 10th birthday. With help from the Tri-State Restaurant Club, she discovered backyard hibachi. Credit: Linda Rosier

Who is Chef Soy Sauce, exactly, and how do you get him to call you back?

This was a recurring question on social media this fall after reports surfaced of a masked hibachi chef who would spin his cleaver in the air, quick-sear shrimp and toss mushrooms into the mouths of willing diners — but in private backyards, on a portable grill, and far from the usual environs of a Japanese hibachi house.

In the time of COVID and social distancing, hibachi-at-home has become an explosive (and explosively quick-to-build) trend on Long Island, so much so that demand has begun to outstrip supply. Hence the word-of-mouth popularity of Chef Soy Sauce, whose name surfaced this summer on the Tri-State Restaurant Club, the dynamic Facebook foodie group. "This guy is impossible to get a hold of," wrote one member.

Turns out, Chef Soy Sauce is not a single person — instead, it's a phalanx of chefs — but for those with an itch for a private hibachi experience, there are a few other established restaurants, and at least one startup, who offer the same experience.

"We wanted to give our diners every option possible, so why not bring the hibachi to them?" said Peter Faccibene, who co-owns Shiro of Japan in Carle Place, a veteran of the hibachi-at-home space and Japanese-food catering in general. Faccibene said Shiro has held dozens of home hibachi parties led by a chef (sometimes two) and servers who arrive one hour beforehand to fire a portable flat-top grill. The kinetic experience is still full of stagecraft, and can be tweaked to include lobster tail or filet mignon, or the addition of a live sushi chef. "The options are really endless for what people want," said Faccibene.

Price has not seemed to be a deterrent, though, with people hungering after at-home dining experiences that mimic going out to a restaurant. "We’re booked into November," said Faccibene, adding that the in-person hibachi tables inside Shiro itself still remain popular.

At Kashi of Rockville Centre, general manager Jasmine Zou said that the restaurant began home-hibachi catering in mid-September, and bookings are already on fire. "I’ve been going crazy with it," said Zou.

Earlier this year, when longtime friends Deborah Valenti and Nicole D’Onofrio noticed the building demand, they persuaded D’Onofrio’s husband, Dominic D’Onofrio, to jump into the game. "He’d been dabbling in this for awhile. He started it for his family, and just got better and better," said Valenti. "‘I said, ‘Dom, you have to do this.’"

And Dom Bachi was born. Armed with a 36-inch, propane-fueled tabletop grill, D’Onofrio (a field manager for National Grid by day) shows up with a smorgasbord of meat, seafood, rice and sides such as salad with ginger dressing, conducting 90-minute interactive experiences and occasionally making TikToks with children. Since August, he’s notched bar and bas mitzvahes and birthday parties for between 10 and 45 people. "He’s the Godfather of hibachi," said Valenti, citing the D’Onofrio’s outsized Italian personality.

Here are a few places offering hibachi at home on Long Island:

Packages start at $45 per person for parties of eight or more, and include a masked chef and servers (plus an additional chef for parties of more than 15 people). The experience is roughly two hours and the price includes meat or seafood, vegetable fried rice, and noodles, with upgrades available for lobster and filet mignon. Figure in an additional fee of $200 for the sushi chef and $250 for the grill rental.

Prices begin at $35 per person ($25 for children under 12) and include a choice of two proteins, with upgrades available for items such as scallops, Chilean sea bass and filet mignon. Edamame, fried rice and vegetables are included, and there is a required $200 deposit and additional $200 fee per sushi chef.

$50 per head is the starting rate for this 90-minute hibachi experience, and diners can choose one or two proteins. There is no extra fee for the chef, but a 20-person and $1,000 minimum for parties, and events must be within about 15 miles of the East Northport restaurant.

The motto is "more saki, more happy," for this elusive player in the hibachi-at-home space. Prices start at $50 person for two proteins, and there is a 10-person minimum during the week, and 15 person minimum on weekends.