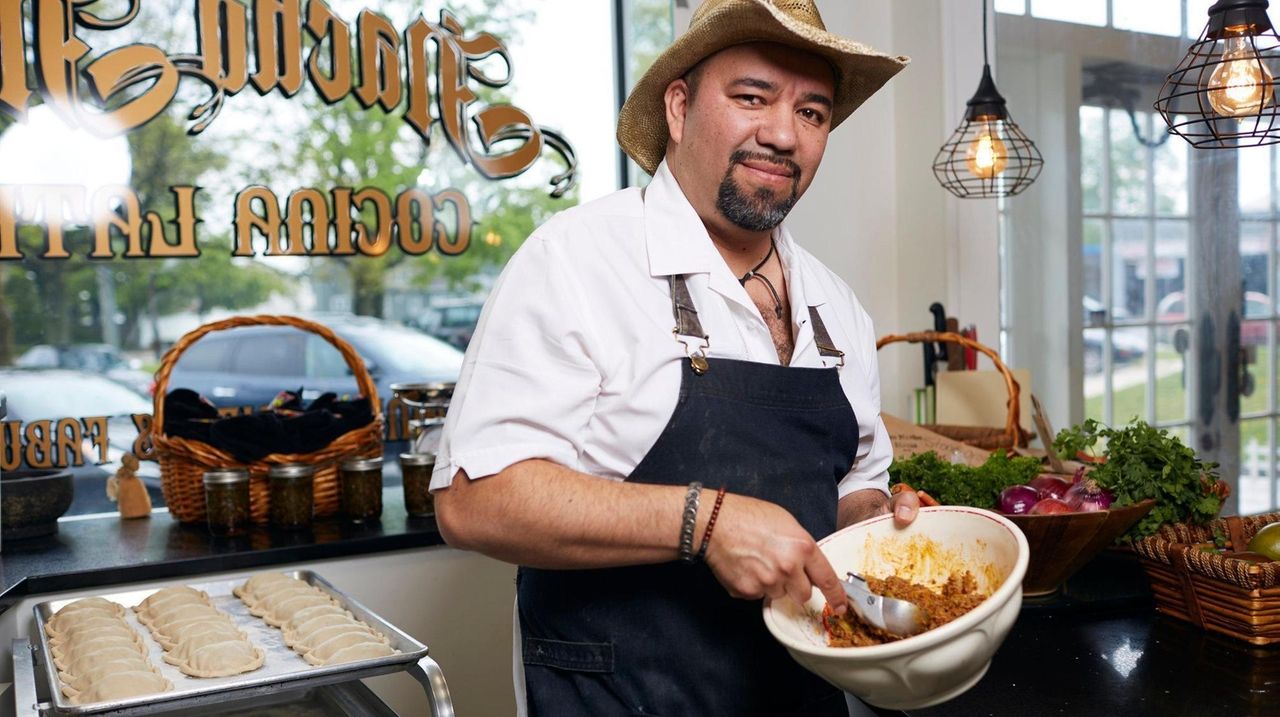 This eatery in Hicksville is owned by Carlos Juarez, a Guatemalan native, and his family. On Monday, Juarez prepared beef empanadas. Credit: Yvonne Albinowski

I AM NACHO MAMA

I was having a Proustian moment at a Hicksville restaurant recently — gnawing on a sweet-smoky cob of street corn brought to mind long-ago days in Mexico City’s Condesa and a desperate search for a Frida Kahlo fridge magnet — when suddenly I heard what sounded like a furious fight in the kitchen.

There were punches, grunts and soon the pummeling escalated. It was one of those moments when strangers give you the look, the one that says we’re all gonna end up on the CNN news ticker if someone doesn’t do something. Grudgingly, I took the lead, plopping down my corn and approaching the restaurant’s owner, Carlos Juarez, who happened to be making a burrito at the time.

“I apologize,” he said. “They’re pounding the air out of the dough we use for churros. Usually we do that further in the back.” Minutes later, Juarez was delicately distributing gerbera daisies to bottles on the eight or so mismatched tables in his dining room, like some peacenik from “Hair.” It was all very confusing.

“I’ve always been quite a comedian,” Juarez said later by way of explaining the name of his establishment, I Am Nacho Mama. I feel confident in asserting that it’s the only eatery in recent memory whose name is a complete sentence. Also that it’s the best thing to happen to Hicksville since IKEA arrived in 1991. Also that it’s a Latin fusion place of furious passion and surprising humor. Indeed, rarely have such forces combined to produce such deliciousness.

In short, this is nacho average restaurant. Juarez, a Guatemalan native, has drawn inspiration from Mexico, Spain, Puerto Rico and just about every other country that typically makes it to the Miss Universe top five. The Mama Cuba sandwich, one of his hottest items, contains generous shavings of pernil, slow-roasted pork that’s been marinated in “one bath of sofrito, and a second bath of beer,” as Juarez put it. To that, he adds staples such as ham and Swiss cheese but ups the ante by dressing the sandwich with curtido (pickled cabbage), imparting an acidity and brightness to a family recipe that goes back four generations.

At I Am Nacho Mama, that protean pernil finds a home in burritos, bowls, tacos and nachos, and all are wonderful. Even better, the pork ribs — prepped similarly, but then rubbed with a racy lime and salt mixture and seared on a wood fire grill — are among the best of their kind. Shards of succulent pork fall off the proverbial bone, mingling delectably with tart cilantro lime rice and creamy black beans. In short, these are nacho granddad’s pork ribs.

Nacho Mama’s story begins in 2015 and reads like an episode of “When Food Trucks Go Wild” (van parks in East Meadow, generates rabid following, demands for bricks-and-mortar). And since opening in February in an all-but-forgotten strip center off Newbridge Road (somewhere Rihanna is singing “we found love in a hopeless place”), the lines have been predictably steady and, in a hopeful sign, are full of folks who don’t know their pernil from picanha. Needless to say, Juarez’s wife, Yvette, who works the register, often finds herself in patient explanation mode. (The woman in front of me needed so many questions answered before ordering her Mama Cuba, I almost ran to the back to pound some churros.)

South American influences abound in Juarez’s picanha — a cut of rump steak popular in Brazil that works its way, like the pernil, into burritos, bowls and more — and his chori burger, in which regular old ground sirloin finds itself subtly enhanced by Argentinean chorizo. (“Mexican chorizo is very loud,” said Juarez, diplomatically.) In fact, the sausage’s oregano, garlic and parsley notes bring so much life to the humble beef patty, you’ll wonder why the pairing isn’t more common.

I Am Nacho Mama’s penchant for fresh ingredients and simple doughs of the non-propionic-benzoic-whatever variety enhances everything from its corn tortillas to its estimable empanadas (the chicken one is particularly terrific — packed with juicy-not-greasy shredded meat). On the other hand, the signature beverage, a much-ballyhooed limonada fresca with hibiscus, is watery and flavorless, and the dessert flan almost curdles under the weight of a rum infusion. Given that, you might be forgiven for sticking with Juarez’s savory items and forgoing the sweets altogether.

Nacho fast. The churros are hot, sweet, crunchy and irresistible. Oh, and pounded to perfection.