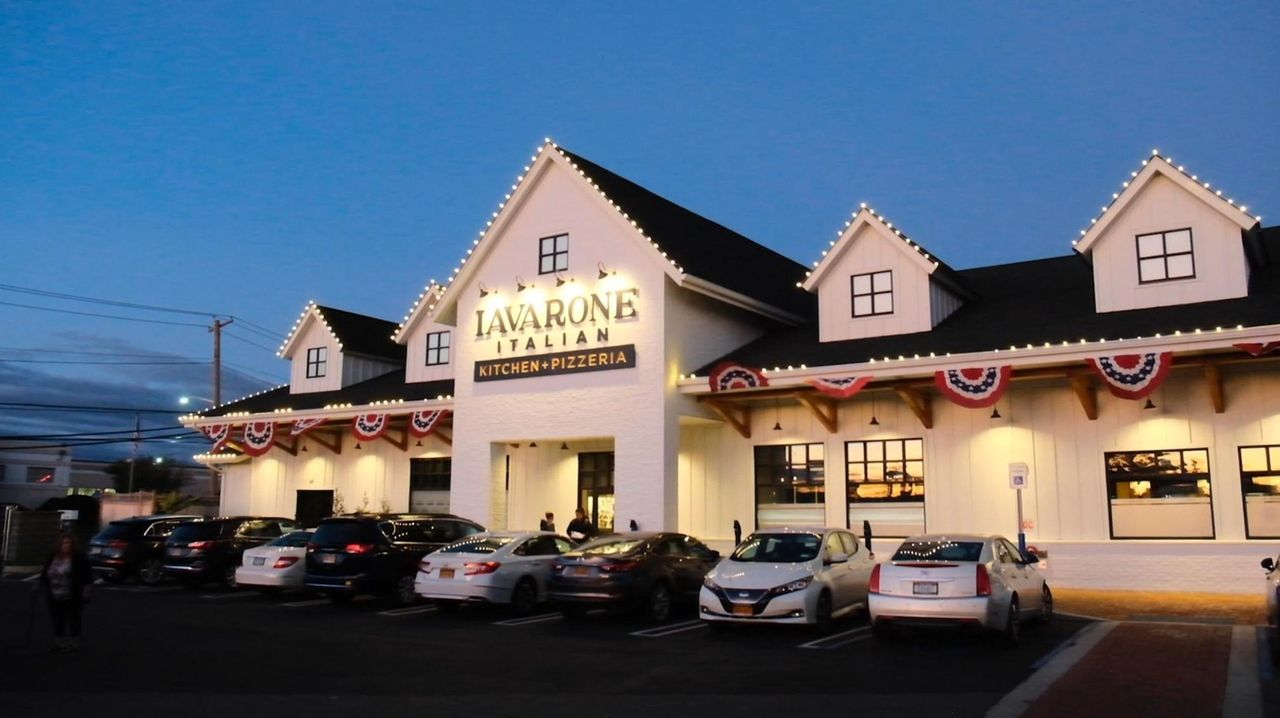 Iavarone Italian Kitchen & Pizzeria in Plainview employs a "casual, chic design," according to partner Joe Iavarone, who on Friday, Oct. 18, said the atmosphere they were going for is comfortable enough to bring the entire family, yet formal enough that it feels like "a hint below fine dining." Credit: Daniel Brennan

AMBIENCE: Vast, loud, and impersonal, with a market and pizzeria to one side and a sea of booths and tables elsewhere

No matter how much marinara there is on Long Island, there always seems to be room for more. Drop tomatoes in a pot and we will come, with boundless appetites and lusty opinions — in this case, to Iavarone Italian Kitchen and Pizzeria in Plainview, which buzzed from its opening bell two months ago. On a Saturday night, especially, the parking lot (and its eight Tesla charging spots) is likely to be jammed and the bar two-deep with those waiting for tables (no reservations taken for parties smaller than five) while sipping white sangria and manhattans, the decibel level soaring as clinking plates and shouted conversations bounce across the exposed rafters above.

This newest node in the Iavarone family empire is the most ambitious, an Olympian departure from the other Iavarone Bros. markets and cafes dotted around Long Island. It’s also such a virgin address that an iPhone might misdirect you to a nearby hotel. Once you find it, the building is so new it almost squeaks, with bleached-white walls and barnlike dormers outside and inside, a vast space with a market and pizzeria on one side and an elegant bar on the other, booths and tables extending in all directions. Though suave, it's also vaguely impersonal and cold.

Warmth comes from a garrison of identically clad servers — but despite being staffed up, waits between courses can run long, and the time from when giant, overly dense meatballs appear to the last halting bites of tiramisu may be well-over two hours. Hence, the pileup at the bar.

The Iavarones have been selling sausage since Calvin Coolidge was president, and in the 1950s had the brilliant stroke to take unsold chicken thighs off Frank Perdue’s hands and start producing chicken sausage. Yet pizza is also a calling card, and the gas-fired ovens in Plainview turn out plenty of oil-slicked slices under the eye of Vito Simone, former pizzaiola in the New Hyde Park location. On the restaurant side, you can also order thin-crust “pizzettes,” the best of which was a gone-in-a-flash margarita pie with puddles of snow-white mozz and char bubbles all over. Eggplant and mushroom versions hold their own, but I still can taste the white-clam pizza — so pungent you can smell it from a few yards away — and not in a good way.

The Iavarone brothers have placed the kitchen in the hands of executive chef John Ioannou. His attention to detail elevates what could be rote appetizers: Greaseless rings of fried calamari (no tentacles, strangely) that almost seem air-fried, with a plucky Fra Diavolo sauce. A ribbon of scorched, tender octopus over tomato and butter-tinged gigante beans. Dainty baked clams with tart crumb crusts. Save for a pungent Caesar, though, salads are underdressed, whether baby spinach with shaved Brussels sprouts or a chunky Sicilian-style number.

Pastas snap to an al dente beat, from a lusty version of orecchiette Barese (with that chicken sausage, and called orecchiette Ioannou here) to pappardelle beneath an eruption of gutsy Bolognese. A house specialty, angel-hair tossed with chopped lobster and shrimp, was soupy and unfocused, though.

Large portions rule, so even though you drop $42 on a grilled veal rib chop, they'll likely be some left for lunch the next day. It’s an almost faultless piece of meat, perched on mashed potatoes that practically sweat butter. A hulking double-cut pork chop, caramelized by a maple-fig glaze and super-juicy, can also feed two. Seared branzino fillets sport crispy, fragile skins, like fish-skin candy, and flaky, perfectly cooked insides. The only misfire as the meal reached a crescendo was chicken scarpariello that lacked depth, as if the components were forced together.

Desserts run the keep-it-safe gamut from a tart-sweet Key lime pie to a tiramisu that, though it appeared as if someone had grabbed a human handful of it to plate, was superb.

There’s a turning point each fall when you realize it’s only going to keep getting colder. Iavarone Kitchen is well-timed for this moment, with giant portions, the occasional deft touch, and enough unabashed calories to see you through the winter.