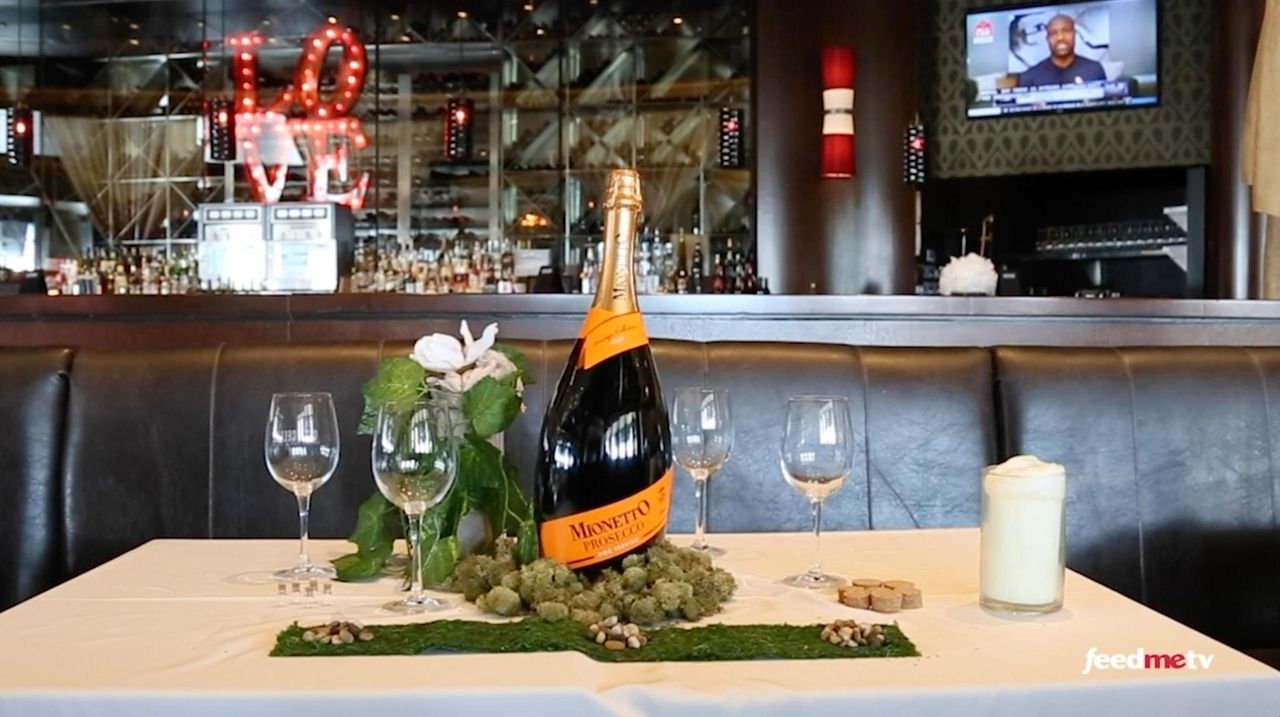 When City Cellar Wine Bar & Grill started preparing to reduce their seating by 50%, the owners didn't want their 240-seat restaurant to look bare. So they found a way to keep the restaurant's ambience alive, while still maintaining the social distancing requirements.    Credit: Yvonne Albinowski

Long Islanders returned to indoor seating at restaurants for the first time in more than three months Wednesday as the region entered Phase 3 of the state's reopening from coronavirus stay-at-home orders.

At City Cellar in Westbury, getting the set-up right in the vast 240-seat dining room took some work.

“At first, we just took out half the tables,” said co-owner Michael Abbatiello, “but the place looked so bare. So we put all the tables back but only set half of them. That didn’t look right either.”

Eventually, he and his team decided that the tables destined for customers would be set, as per usual, with plates, glasses and napkin-wrapped flatware. The other tables were covered with tablecloths and each graced by a little tableau — a pot of flowers, a pillar candle, a jeroboam of Champagne, a Japanese garden of little black stones.

At the bar, five high-top tables have been set up seven feet apart and each table accommodates three barstools. That’s up to 15 customers at a bar that usually has 20 seats.

On Wednesday, City Cellar’s 90-seat outdoor patio was mostly full. Only five parties took advantage of the air-conditioned indoor dining room. Ralph Natale of Franklin Square was thrilled to be back in the swing of things. “For three and a half months my family and I have hunkered down, we’ve played by the rules. But being in a restaurant again, it feels amazing.”

Customers were eating lunch inside several spots in downtown Patchogue, such as Buttermilk’s Kitchen, where staff had seated alternating tables and booths. At the undulating bar inside James Joyce, stools were clustered into three sections for socially distant drinking. Local Burger Co. had raised its front garage door and several diners were inside.

At Bird & Bao on South Ocean Avenue, owner Conor Swanson had stacked several seats from the eat-in area of his cafe, reducing the capacity from 16 to 11 diners — which also allows three people to wait on line at any time, for a total interior capacity of 14 people.

“I’m a little bit anxious about [indoor dining], and was unsure what it’s going to be like,” Swanson said. He also had placed two tables on the sidewalk out front and three in the back. “But we’re happy to have people back in.”

In Farmingdale, That Meetball Place opened promptly at noon, having been closed since March, and welcomed its first two customers, Clare Soria and Sam Kramer. The Farmingdale residents wandered into the dining room, completely unaware that this was the first day they could do so in months.

“We thought coming to lunch on a weekday would be fine because there wouldn’t be a lot of people," Soria said. "I’d still be really hesitant to eat dinner on a weekend inside. But right now it’s only us, so we’re good.”

Owner of Rockville Centre Mexican spot talks new rules for indoor diningLong Islanders returned to indoor seating at restaurants for the first time in more than ...

UK jubilant as lockdown restrictions to be lifted next week
Why Sayville may be LI's next 'it' restaurant destination
Oyster Bay may confiscate food trucks over code violations
Pandemic-hit oyster farmers turn to conservation to survive
LI restaurant scores with hot and cold lobster rolls
New Asian takeout spot opens in Huntington
Didn’t find what you were looking for?