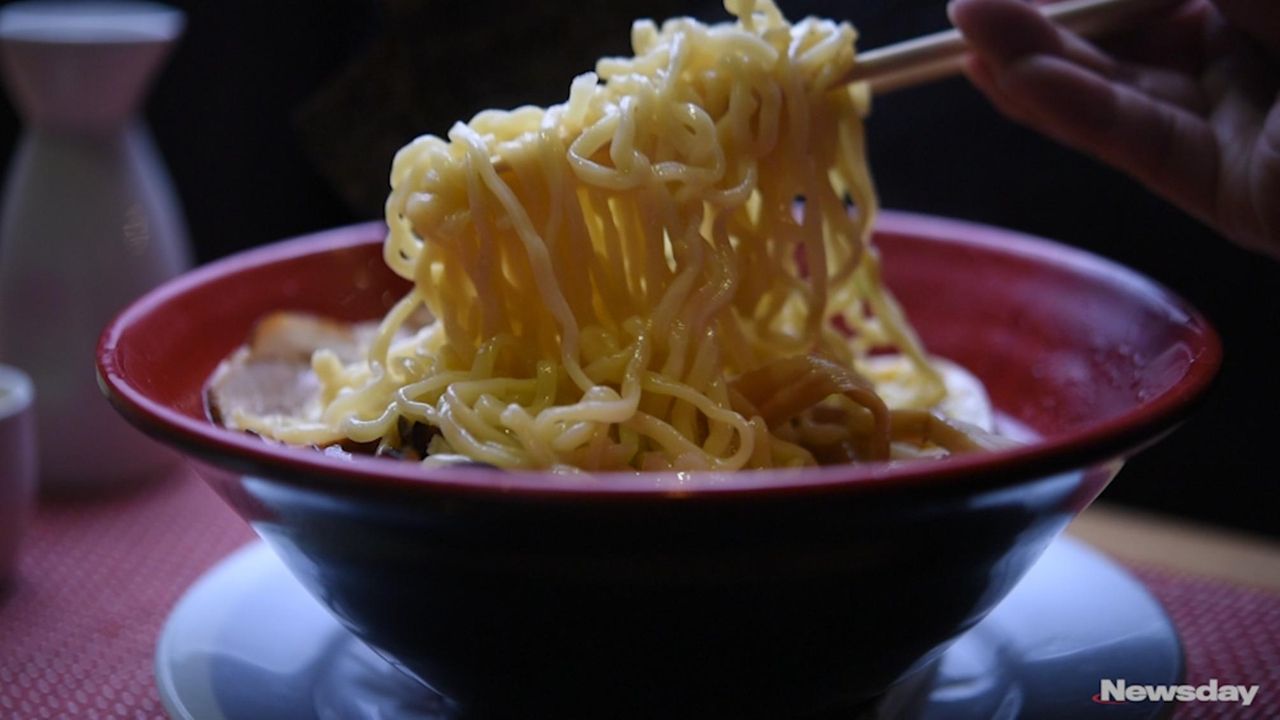 SERVICE: Efficient and eager to please

The plan was for Ippon not to have sushi. After all, Great Neck is well fixed for raw fish, with six outlets within four blocks — including Elaine’s Asian Bistro down the street — and another half dozen within a mile or so.

Nick Way and his partners were bent on highlighting some of Japan’s lesser-known culinary traditions: ramen (noodle soups), donburi (rice bowls), yakitori (grilled skewers) and izakaya (bar snacks). “We found a lot of sushi bars and a lot of Asian restaurants in the area,” he said, “but not a lot of authentic, traditional Japanese food.”

But as the team was preparing to open, he said, “people kept coming by and asking if we were going to have sushi.” And so, a small sushi bar was installed in the back of the spacious dining room, and a full sushi menu, including a dozen entrees and 40 rolls, was added to the already extensive menu of 70-plus cooked items.

The sushi here is good enough. We enjoyed a serviceable chirashi and the piquant, rice-free Ippon roll made with spicy salmon, spicy tuna, seaweed salad and crunch — but I’d urge diners to take the opportunity to expand their Japanese horizons.

The first thing you see when you walk into Ippon, formerly Era, is a long, comfortable bar, and this is a perfect place to explore the restaurant’s izakaya menu, which features the small plates served at the Japanese equivalent of a tapas bar. Don’t miss the black croquettes, coal-black orbs beneath whose pebbly crust is an outer layer of mashed potatoes and whose molten center is a creamy custard of cuttlefish and shrimp. (The crisp panko coating gets its hue from cuttlefish ink.) Other winning bites include juicy morsels of ginger-fried chicken and the otafuku omelet, filled with noodles and octopus and topped with a generous lattice of mayonnaise and ribbons of shaved dried tuna. The pork gyoza, seared to a crisp on one side, were much better than the tasteless shumai.

Another great bar snack is yakitori and, except for the puny and overcooked shrimp, all skewers did the trick: chicken thigh, beef, pork with scallions, zucchini with bacon. Though billed as “oyster mushroom” the fungus in question was actually the much more imposing king oyster mushroom (aka king trumpet mushroom), a thick-stemmed bruiser that required a steak knife to cut.

Speaking of misnomers, I was excited to see four donburi on Ippon’s menu, including my favorite, oyakodon. Oyakodon literally means “parent-and-child rice bowl,” an allusion to its two main ingredients, chicken (parent) and egg (child). Pieces of dark-meat chicken are simmered with a sweet-savory sauce and then served with onions and lightly scrambled eggs over a bowl of rice, the heat of which finishes cooking the eggs. How bummed was I, then, to find that this oyakodon was made with a deep-fried chicken cutlet.

Ippon’s lead ramen is the classic tonkotsu, the broth made from long-cooked pork bones and then garnished with braised pork (or fried pork cutlet), plus seaweed, bamboo shoots, wood-ear mushrooms, fish cake, scallions and a softly boiled egg. This was a satisfying bowlful, not as heart-stoppingly meaty as some I’ve had, but a solid win for Great Neck ramenophiles. You also can get miso ramen (broth based on fermented soybean paste) with seafood, beef or vegetable, or a chicken-broth ramen with either fried chicken cutlet or teriyaki chicken.

While much of its fare hews to a traditional line, Ippon also serves plenty of Asian fusion — lobster tacos, salmon carpaccio, tuna-tortilla pizza, miso black cod and the like. Among them, two standouts were a salad of black pepper-coated seared tuna served on a bed of greens with scallion and tobiko (flying fish roe) in a tart sesame dressing; and a spicy stir-fry of udon (thick wheat noodles) with kimchi and pork belly (you also could get beef, seafood, chicken or vegetable).

Ippon’s servers are exceedingly accommodating. The room, with lots of wood and stone offset by red and black accents, is spare but warm. This is a once-a-week kind of place and, with such a vast menu, it may take a year to sample all that Ippon has to offer.

Try something new: Recent LI restaurant openings
UK eager for a big reopening thanks to vaccine success
Why Sayville may be LI's next 'it' restaurant destination
Pandemic-hit oyster farmers turn to conservation to survive
LI restaurant scores with hot and cold lobster rolls
New Asian takeout spot opens in Huntington
Didn’t find what you were looking for?