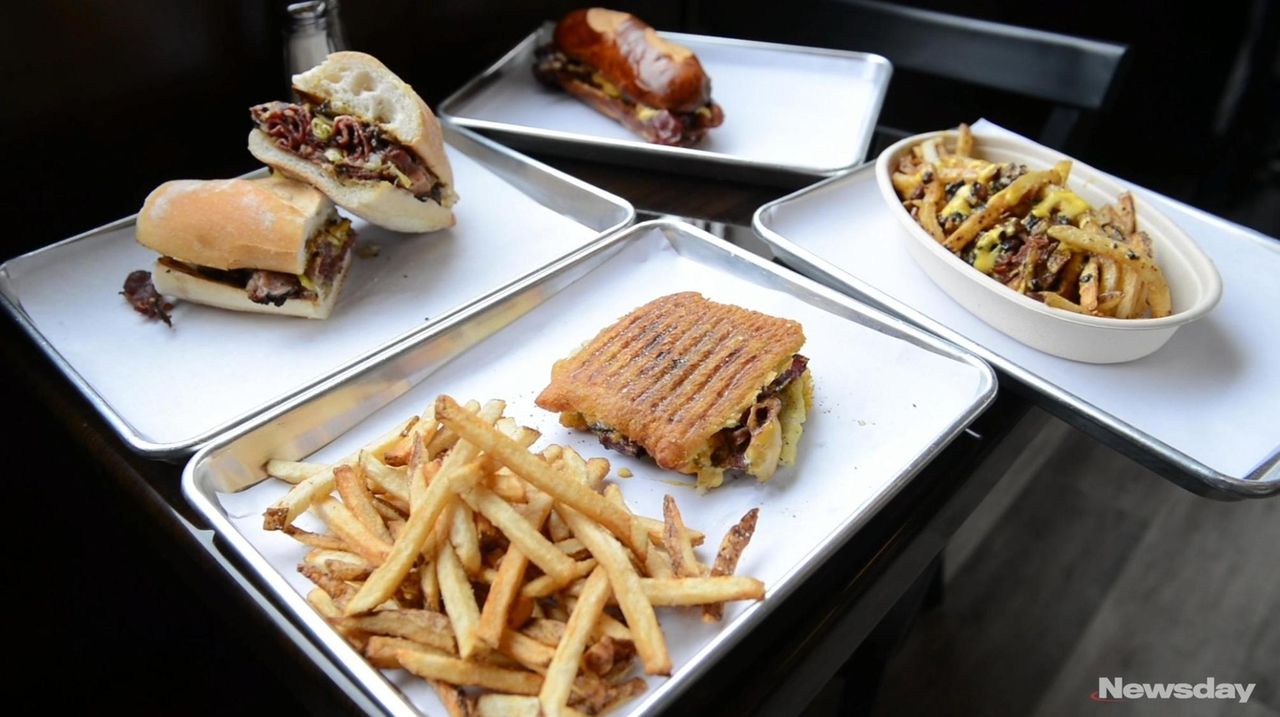 SERVICE: Friendly with a sense of purpose

How many ways can you present hot pastrami? To Andrew Fenton, the answer is not enough. At the newly opened Irving’s World Famous Pastrami in Woodbury, the restaurant comes with a heavy burden: carrying out the dying wish of an old man he befriended as a teenager in Lake Ronkonkoma.

As Fenton tells the story, on a fall day when he was 13 years old, he was ordered by his father to help Irving with outdoor chores. He was not allowed to take money for his work, so Irving paid him in pastrami made from an age-old recipe that was passed down from his Romanian ancestors.

On his deathbed, Irving handed him a wooden box with the family secrets and a plea: “I was never fortunate enough to do anything other than make it here in my kitchen, but promise me, if you ever get the chance, you will share my pastrami with the world.”

More than 30 years later, pushed by his 19-year-old daughter, Gianna, who is the driving force behind Irving’s, Fenton is presenting the pastrami in dozens of ways.

There are 14 different pastrami sandwiches along with a pastrami knish, a pastrami-topped hot dog and pastrami-loaded French fries. For those wanting no bread, a pastrami bowl with hot threads of pastrami laced with cheese atop the almost Dijon-like special sauce. There is the low-carb pastrami wrap, an Italian-ish salad and pastrami topped with the latest fad: acai berries.

Irving’s is a relatively tiny and understated space with 24 seats and a few outside tables, tucked inside the Woodbury Common strip mall in the former Crumbs Bake Shop. Here you’ll find Fenton working in tandem with his daughter, who will carry the torch and has hopes of expanding to multiple locations.

The restaurant quietly opened more than a month before rolling out a full menu, which also includes a smaller non-pastrami section with steak, chicken and a host other dishes one would expect to find at a Jewish-style deli, including chicken, egg and tuna salads, hearty house-made knishes and potato pancakes.

Gianna is a smiling presence out front, working tables and helping customers navigate the menu. Dad is a friendly and, at times, nervous spirit. It’s understandable when you have never been in the restaurant business and the weight of Irving is on your shoulder.

These days, Fenton’s pastrami is made elsewhere to Irving’s specifications, and then sliced in the kitchen. The meat has a nice bite from spices, with bits of crispness from being heated to order. (Sandwiches come with your choice of either a third of a pound or a half-pound of meat.)

Irving’s doesn’t make its own bread, and the best way to sift through the menu is by the vehicle for your pastrami. Rye breads, club rolls and pretzel bread do well. The bagels and white bread not so much.

In my experience, it’s best to come here with a group for the full pastrami experience.

The Angry Irving is another hit, a mix of pastrami with provolone, onions, spicy pepperoncinis and horseradish on a grilled sourdough club roll.

Moving on, try the potato knish. At Irving’s, they are better than the potato pancakes, and best when sliced in half and layered with pastrami, melted American cheese and yellow mustard.

You’ll also want the hot dog, because a good wiener is made better when it comes on a pretzel roll topped with spicy slices of meat, melted cheese and mustard.

Skip the onion rings, which have a freezer quality to them, and order the French fries, house-made shoe strings that in true Irving’s fashion come with a loaded option, which means they are arrive studded with crispy bits of pastrami ends and drizzled with Irving’s special sauce.

If you have room for something sweet, try the airy chocolate mousse pie, but it’s not why you’re here.

“World famous” is a tall order, but the pastrami has the promise to one day have such a designation. Irving, for one, would be proud.