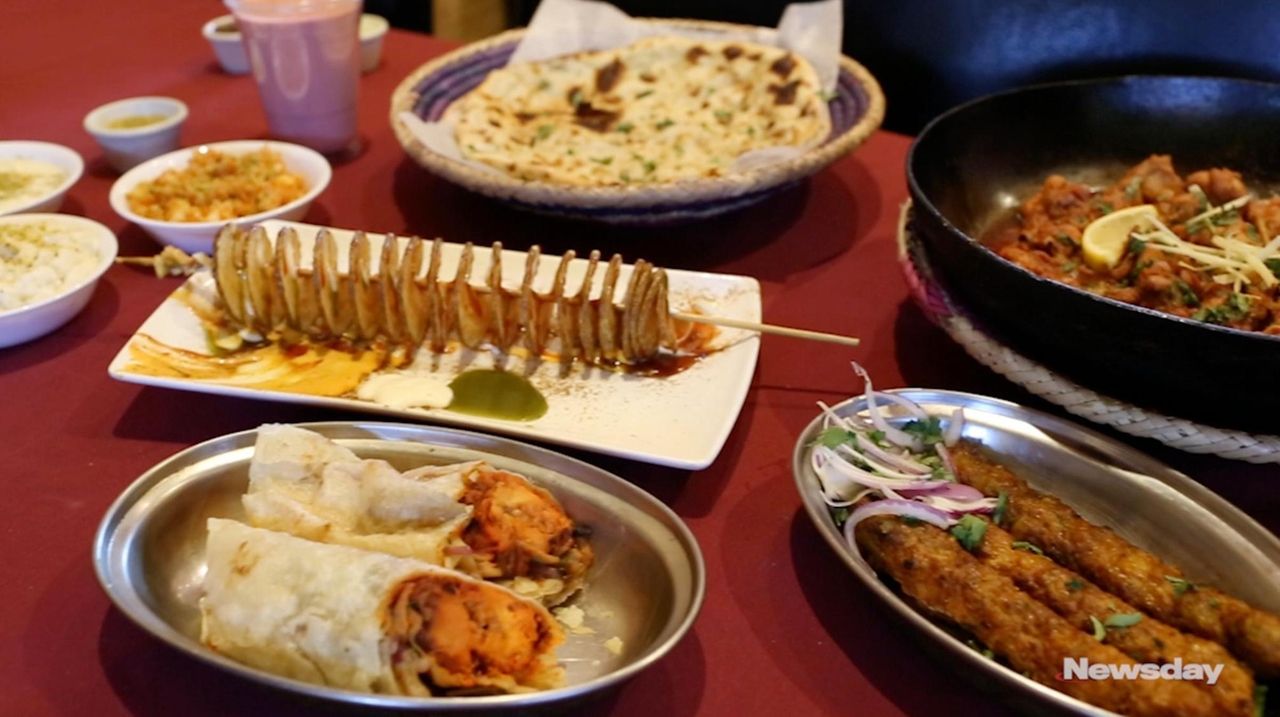 Faisel Ejaz, chef-owner of Kababjees in Hicksville, cooked up a rather unique dish, toofani aloo, a whole potato cut into a continuous spiral, threaded onto a thin skewer and stretched out to three times its natural length.    Credit: Yvonne Albinowski

AMBIENCE: Modest in the extreme

The two gentlemen at the table next to us were eating something I had never seen before. It appeared to be a whole potato that had been cut into a continuous spiral, threaded onto a thin skewer and stretched out to three times its natural length.

“We need one of those,” I told the server.

When our toofani aloo (“stormy potato”) arrived, golden and crisp, I realized that it had also been deep fried. I gingerly pushed it off the skewer and my party regarded what was, essentially, a spud slinky. “Too bad the restaurant has no stairs,” a pal remarked.

The poor potato was beginning to cool off by the time all the wisecracks and Instagram photos were out of the way, but even lukewarm, it was a triumph of tuber cookery. And an ironic one as well, since Kababjees is a restaurant devoted to meat: The name means “Mr. Kebab” in Urdu and, in another stroke of irony, the address, formerly Tandoori Touch and Punjabi Kabab House, was once occupied by the original Mr. Sausage.

About half of Kababjees’ menu is devoted to Pakistani-style kebabs. You might start your exploration with the seekh kebabs, minced spiced meat wrapped around a skewer and grilled. The beef and lamb are both recommended, the latter’s strong taste was brightened by lots of fresh mint. Don’t miss the chicken cheese kebab, where the ground chicken is mixed with cheese. It doesn’t add a lot of flavor, but rather a silken texture. If tandoori-roasted meat is your thing, get the chicken tikka kebab (go for bone-in), russet, yogurt-marinated hunks of spicy gnaw-worthy goodness.

Many of the kebabs can also be had rolled up in puri paratha, deep-fried, paper-thin flatbread. (Think burrito but smaller and more focused.) The boned chicken tikka masala is profitably deployed in the chicken tikka juicy roll, smeared with spicy mayonnaise and tarted up with sour pickle. The Bihari chutney roll encircled grilled chicken, red onions and a spicy-sweet chutney.

The only kebab that didn’t send me was the beef gola, whose heat and loose texture reminded me of the Calabrian spreadable salami nduja, but without nduja’s moist cohesion.

It’s not just kebabs here that are so good. One of the highlights of my meals was the chicken karahi, an intensely savory — though not terribly spicy — dish that takes its name from the cast-iron pot (“karahi”) in which it is cooked. “It’s a famous Pakistani dish,” said chef-owner Faisel Ejaz. “It’s less saucy than a curry, and, unlike most Indian dishes, it has no yogurt, no onion. Just tomatoes and garam masala [a spice mixture].”

I longed for some white rice with which to take advantage of every drop of the karahi’s ocher-hued sauce, but Kababjees’ only rice offering is an unremarkable chicken biryani. Instead, we employed copious amounts of whole-wheat roti and naan, both plain and sesame-seeded (Lahori kulcha naan).

One of the breads deserves its own paragraph: aloo naan, blistered from the heat and stuffed neatly with mashed, seasoned potatoes. You’ll not find anything so deliciously knish-like outside of a delicatessen.

The food we ate at Kababjees ranged from mild to moderately incendiary. If your mouth needs relief, there’s sweet lassi (yogurt), plain or mango, to accompany your meal. All the desserts we tried — ras malai (cheese curds in cream), kheer (rice pudding) and sooji halwa (sweetened semolina) — were as tasty as they were soothing.

On Long Island, many “Indian” restaurants are owned and patronized by people from India, Pakistan and Bangladesh. There is some justification for the taxonomic sleight of hand: The cuisines of the subcontinent predate by millennia the political borders that were established in 1947. But there’s something else at work, too: Americans often have a more benign view of India than of its Muslim neighbors, and I was moved by Ejaz’s commitment to raising the profile of his national cuisine. “Chicken tikka masala is really the only Indian dish we make,” he said. “The rest is authentic Pakistani.”

National pride here doesn’t necessarily extend to interior design; Kababjees’ “décor” is slapdash at best, and about half the chairs have busted seat cushions. Happily, this situation is only temporary. The restaurant is in the process of breaking through to an adjacent storefront, a renovation that will more than double seating capacity. Ejaz promised new chairs, new wall treatment and, best of all, the exact same menu.