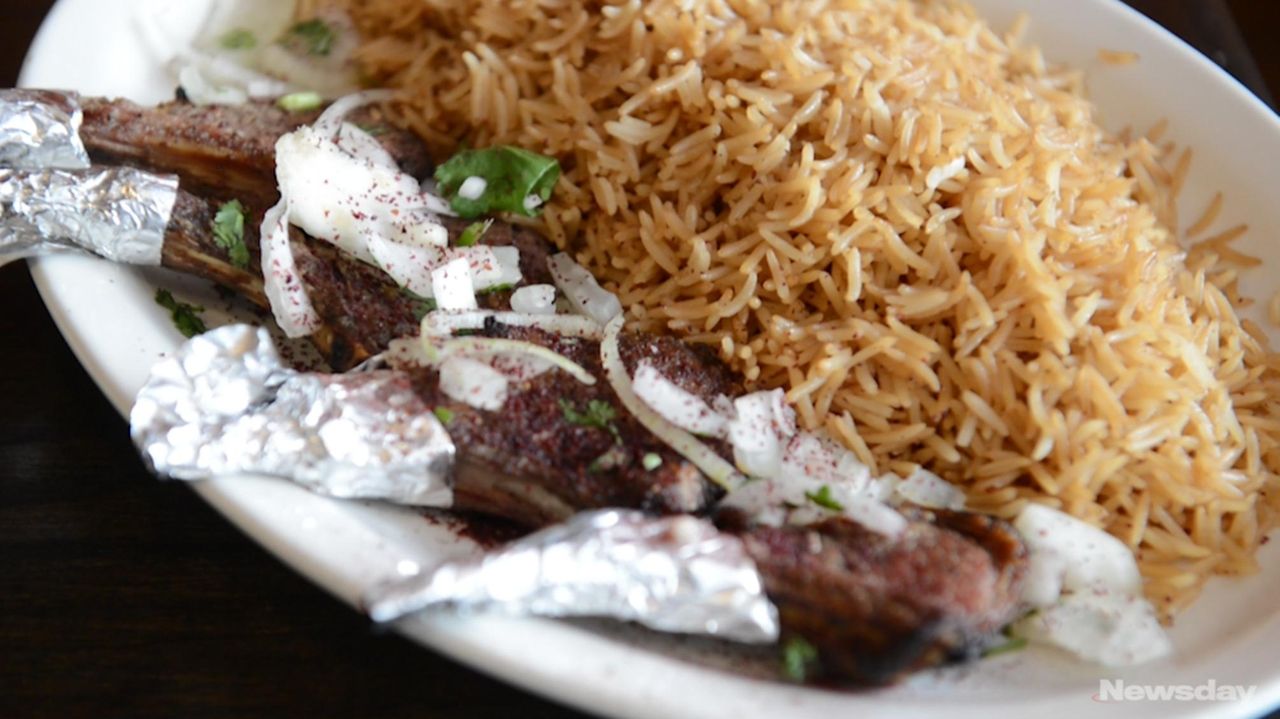 Afghan cuisine hits that sweet spot between familiar and exotic: You've seen the foods before -- kebabs, rice, dumplings, turnovers -- but not with these flavors. At Kebab House in Hicksville, seen here on Saturday, Sept. 30, 2017, you'd be hard-pressed to spend more than $25 a person for a three-course meal that will likely yield leftovers. Credit: Daniel Brennan

ESSENTIALS: Open every day from 11 a.m. to 11 p.m.; ample parking, wheelchair accessible, no alcohol (nor coffee nor soda)

Afghan cuisine hits that sweet spot between familiar and exotic. You’ve seen the foods before — kebabs, rice, dumplings, turnovers — but not with these flavors, and not usually at these prices or in these quantities. But at Kebab House in Hicksville, you’d be hard-pressed to spend more than $25 a person for a satisfying three-course meal that will likely yield leftovers.

The strip-mall storefront has the bones of the pizzeria it once was, but the walls are now hung with intricate prayer rugs and paintings and photographs depicting Afghan landscapes, horsemen and, in keeping with the restaurant’s name, kebabs.

Owner Amjad Khan has Afghan roots, though his family, from the Pashtun Yousafzai tribe, was part of a migration that settled in northern Pakistan. (He noted that Malala Yousafzai, winner of the Nobel Peace Price, is from the same tribe.) Many of Kebab House’s customers are South Asian, but, said Khan, unlike much Indian and Pakistani food, “traditional Afghan food is not spicy so pretty much everyone likes it.”

Start your meal with manto, the refined, four-cornered steamed dumplings that are cousins to Turkish manti and Korean mandoo (as well as Chinese mantou and Tibetan momo). Drizzled with tomato and yogurt sauces, you can see the crumbly beef filling through their translucent skins. Afghan samosas share a name with their Indian counterparts, but in contrast to those sometimes leaden bruisers, these are small, delicate half-moons filled with minced chicken.

The two rich eggplant dips, kash badenjan and badenjan borani, were barely distinguishable, though the former was drizzled with yogurt and the latter had more peel. They were both underserved by Kebab House’s bread — thin, hard and altogether not up to the task of swiping platters to get every last bite.

Kebabs dominate Kebab House’s concise menu and though all are good, I’d single out two for special commendation: The beef chapli are burger-sized patties that look unpromisingly dark, but slice into one and you’ll be wowed by the fragrant savor of minced onion and the house masalah (mixture of spices). On the lighter side, yogurt-marinated chicken tikka kebabs are unusually juicy. All the kebabs — and the small but full-flavored lamb chops — are sprinkled liberally with brick-red sumac, a tart spice made from ground berries of a Middle Eastern bush.

Large parties should consider availing themselves of the family combo platters, which range from eight assorted kebabs ($45.99) to 20 ($99). These are delivered to the table on stainless-steel salvers, the kebabs draped over an enormous heap of brown basmati rice. All kebabs are served with that memorable, nutty, fragrant rice. (Less memorable — entirely forgettable, in fact — is the side salad, an overly generous portion of iceberg lettuce.)

Any of the meats can be further enlivened by a spoonful of one of the two traditional sauces on every table. The green chatni is a searingly spicy jalapeño-cilantro-vinegar relish. The white sauce, first pioneered not by Afghan shepherds but by NYC’s halal street vendors, relies on yogurt and mayonnaise for its cooling properties.

There is one nongrilled meat dish on the menu and it’s a doozy. Kabuli palow starts with basmati rice that has been garlanded with sweet shredded carrots and plump raisins. It serves as a bed for a braised lamb shank whose meat falls off the bone with the merest prod of the fork. Two people might be able to finish the lamb, but you’ll need a third (and, possibly, a fourth) to polish off the rice.

No matter how stuffed you may be, don’t leave Kebab House without ordering the pistachio rolls for dessert. They evince an unusually high nut-to-pastry ratio, the bright-green filling barely contained by the thinnest veil of phyllo.

We had the same server on both our visits to Kebab House, a charming young woman who knew more about Afghan food than we did — if not quite enough to be able to answer our more arcane questions. Luckily, the food spoke for itself.