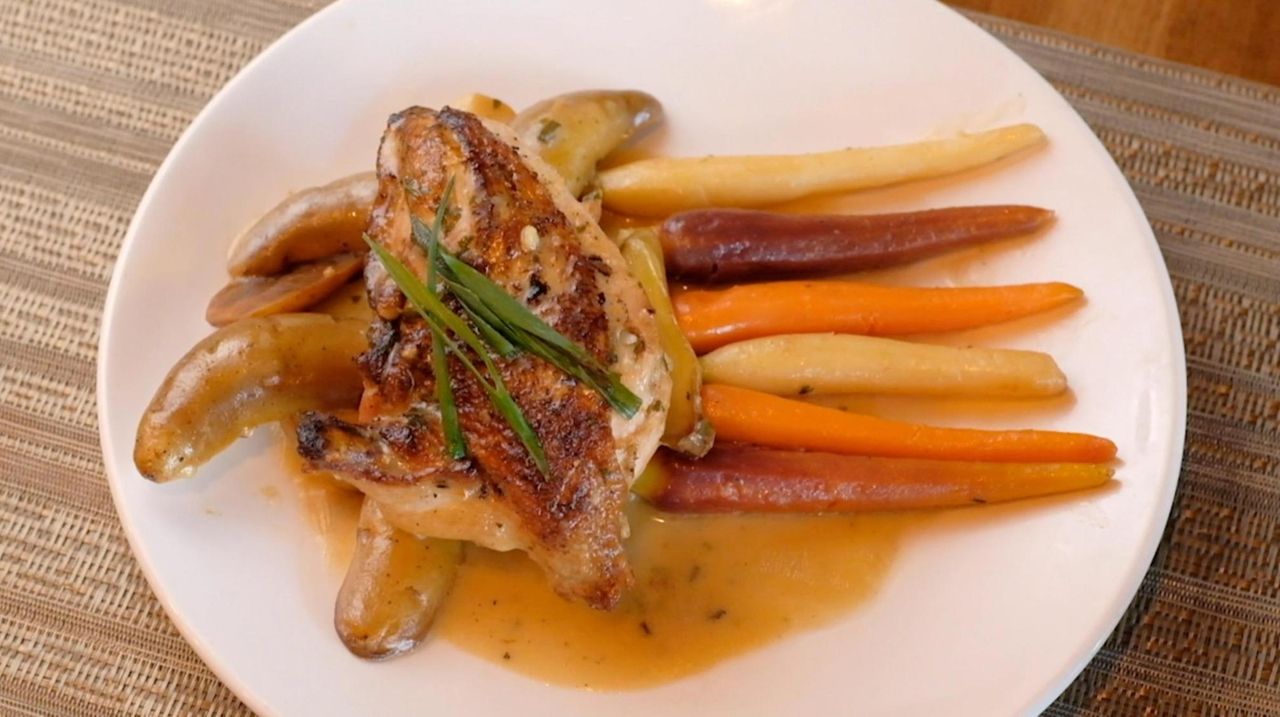 Bruno Oliveira, the chef at Konoba in Huntington, cooked up his tender, juicy chicken breast, served with fingerling potatoes and baby carrots during an interview on March 23, 2019.  Credit: Daniel Brennan

To the roster of cuisines that has made downtown Huntington a dining destination, add a new one: Croatian.

Stretching along the coast of the Adriatic Sea, opposite Italy and bordered on land by five other nations, Croatia is a European crossroads.

Tourists enjoy sites medieval to modern from Zagreb to Dubrovnik, Istria to Split. Islands, waterfalls and mountains abound. The climate is Mediterranean; the food, bracing.

Konoba, which means “tavern” in Croatian, brings the flavors of the country as well as some local favorites to the address occupied most recently by the short-lived Hush Bistro.

Owner Daniel Pedisich and chef Bruno Oliveira, who also operate the nearby wine bar Bin 56, have kept the coziness of the softly lit, wood-paneled dining room and turned up the selections of wine, spirits and beer.

You’ll like the painterly carpaccio of filet mignon, finished with shavings of Parmesan cheese, capers, greens and Croatian olive oil; and the crisp barramundi fish tacos. Definitely order kupus salata, or shaved cabbage with Parmesan, roasted hazelnuts and balsamic vinegar, It will remind you of the coleslaw they must serve in dreamland.

Cross another border with satisfying shrimp-and-crab croquettes, accented with a lemongrass-chili sauce. Before they’re out of them, add a Bavarian pretzel, with pickles and agave-honey mustard dip — the right company for a local draft beer from Six Harbors in Huntington or Sand City and Harbor Head in Northport.

There’s a flatbread of the day. If you’re lucky, it will be a near-parchment thin number capped with prosciutto, mozzarella and arugula. In matters mozzarella, the competition comes from fried burrata with a well-seasoned marinara sauce.

Burrata, the shellfish croquettes and lamb sliders highlight the bar menu. Sample some Croatian wine, from Dalmatia and Istria. Toreta Posip, similar to aromatic and citrusy whites from Italy and Greece; and Androvic Plavac Mali, suggesting a lighter zinfandel, are flavorful selections by the glass. The 2017 Kontokosta Riesling represents Long Island.

But cevapcici, akin to a skewered beef, lamb and pork kebab, arrives exceedingly dry, and en route to carbonization. Neither the mixed vegetable spread nor the French fries can rescue it. Argentine pork baby back ribs come across bland despite a whiskey-barbecue sauce and broccoli rabe. Fuzi pasta tossed with shrimp and Parmesan is almost defined and nearly undone by truffle oil.

You’re much better off with a refreshing, unexpected main dish: the ahi tuna bowl, completed with seaweed, sesame oil, scallions and a crunchy wonton; and hobotnica, a generous portion of grilled octopus with red-beet aioli and Dalmatian olive oil. A Croatian seafood stew, known as brudet, stars cod, shrimp and mussels in a snappy, spicy tomato broth.

Konoba’s sweets are topped by palacinke, or Croatian-style crepes with Nutella. The tres leches cake is respectable, with caramel sauce, berries and Bailey’s-spurred whipped cream. That cream also enriches an almond cream cake with toasted almonds and berries.

You’ll be ready for an after-dinner beverage. Consider the Bibich Ambra Prosek from Croatia, with hints of vanilla and caramel, and the lush 2012 Rosenhof Chardonnay Trockenbeerenauslese from Austria.

Each will make you want to raise a glass to Konoba. As they might say in Dubrovnik, “Nazdravlje.”