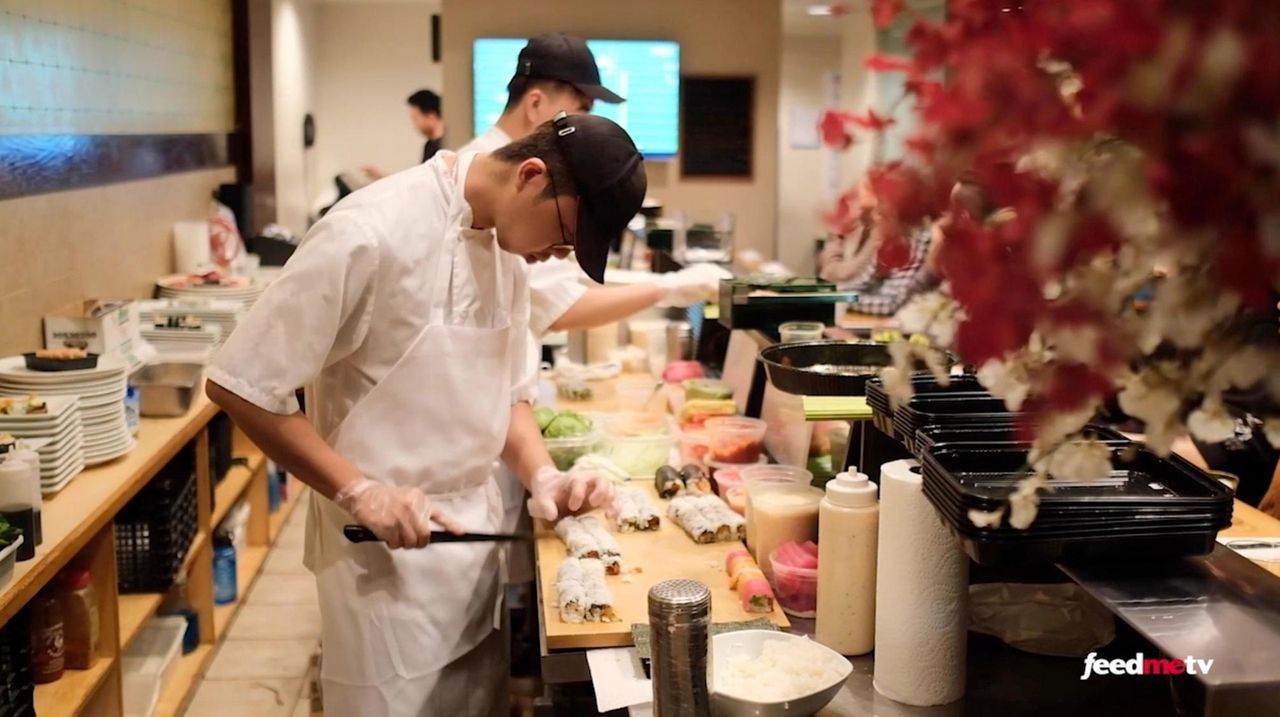 AMBIENCE: Simple, elegant and as serene as the crowds will allow

On Saturday night at Kotobuki in Hauppauge, the seats are filled 10 minutes after the doors open at 5 p.m. By 5:30, the entryway and vestibule are jammed and the line trails into the parking lot. Even on a Tuesday night, every table at this 31-year-old restaurant is full. The story is the same at Kotobuki’s two other locations, Babylon which opened in 1996 and Roslyn, in 2007. What packs them in? It’s not the promise of exotic species such as kanpachi (amberjack) or madai (sea bream) or of a flight of progressively fatty tunas, from akami to chu-toro to o-toro, or of freshly grated wasabi root.

People come to Kotobuki for the rolls. I count 76 on the 8-page diner menu, most of them elaborate amalgams of sweet and spicy, crunchy and mushy. At a recent meal I ordered Puff the Magic Dragon (salmon, asparagus, cucumber, jalapeño, tempura flakes, lobster, seaweed salad), Jumping Shrimp (panko-crusted shrimp, asparagus, romaine hearts, tobiko, chardonnay spicy mayo) and Caterpillar Remix (eel, shrimp, tuna, tempura flakes, avocado, tobiko, spicy mayo and sweet sauce). With my eyes closed I could not tell the difference between them, nor could I taste any fish.

“That’s the point,” said owner Eric Kim whose partner, Yoshihiro Narito, is the chain’s founder. “People on Long Island feel more comfortable eating rolls. They may be eating raw fish, but not just a piece of raw fish.”

He recalled the time when the sushi bar, which had just taken a shipment of super-fresh toro (fatty tuna belly) offered pieces to a few favored customers. “For most people, the flavor was too strong. They liked the frozen tuna better.”

Some of Kotobuki’s fanciful creations are pleasant enough. The K-Mac slider, a patty of chopped tuna, rice, tempura flakes and scallions sandwiched between two fried rice crackers was cute. Tuna “carpaccio” turned out to be thick slices of peppered-and-seared tuna whose leanness was offset by a rich wasabi mayo. But the richness of seared fatty tuna was muffled by a blanket of creamy miso-mustard sauce in the nuta toro. Both dishes — and many more — were garnished with same ham-handed escarole leaves and shredded cabbage. Salmon skin salad was served, clunkily, with the ubiquitous sweetened seaweed salad that Japanese restaurants buy by the bucketful.

A week later I took a seat at Kotobuki’s sushi bar with a gentleman who is not only a regular, but is a Japanese native to boot. Speaking Japanese, he asked the chef to serve us whatever he felt was best that night; price was no object. What a difference.

There were paper-thin slices of sweet, pink-edged fluke, each capped by a dab of yuzu kosho (red pepper paste). This was followed by yellowtail that had been blow-torched to give it the faintest char. The heat brought out the texture of the fish — subtly crosshatched — and also its buttery luxuriance, thrown into relief by thin slices of jalapeño. Next the chef threaded a ribbon of fluke fin onto a skewer and served it, grilled, with a lightly vinegared dressing.

Here was skill, restraint, harmony. But our chef was also hamstrung by the ingredients he had at hand. Three dishes were built around salmon, reviled by sushi geeks: salmon carpaccio was innocuous; salmon rolled around fake crab salad was disheartening; unforgivable was a little cairn that read, from the bottom up, cucumber, hard mozzarella bocconcino, salmon, avocado and miso, served alongside a puddle of sweet-spicy sauce. If there was toro that night, the chef did not serve it to us, the only tuna we got was marinated in garlic and soy.

The narrowness of Kotobuki’s fish selection is no accident. “Everyone likes tuna, salmon, yellowtail,” Kim said. “It allows us to turn the fish quickly and know it is always fresh. If we had kanpachi and it didn’t sell well, we couldn’t ensure the quality.”

Indeed all the fish I had at Kotobuki was sparkling fresh. Portions are generous, prices are fair and servers, many of whom have been here for decades, are friendly and knowledgeable. It’s no surprise that people flock here, and I take my hat off to any restaurant that is thriving three decades on.