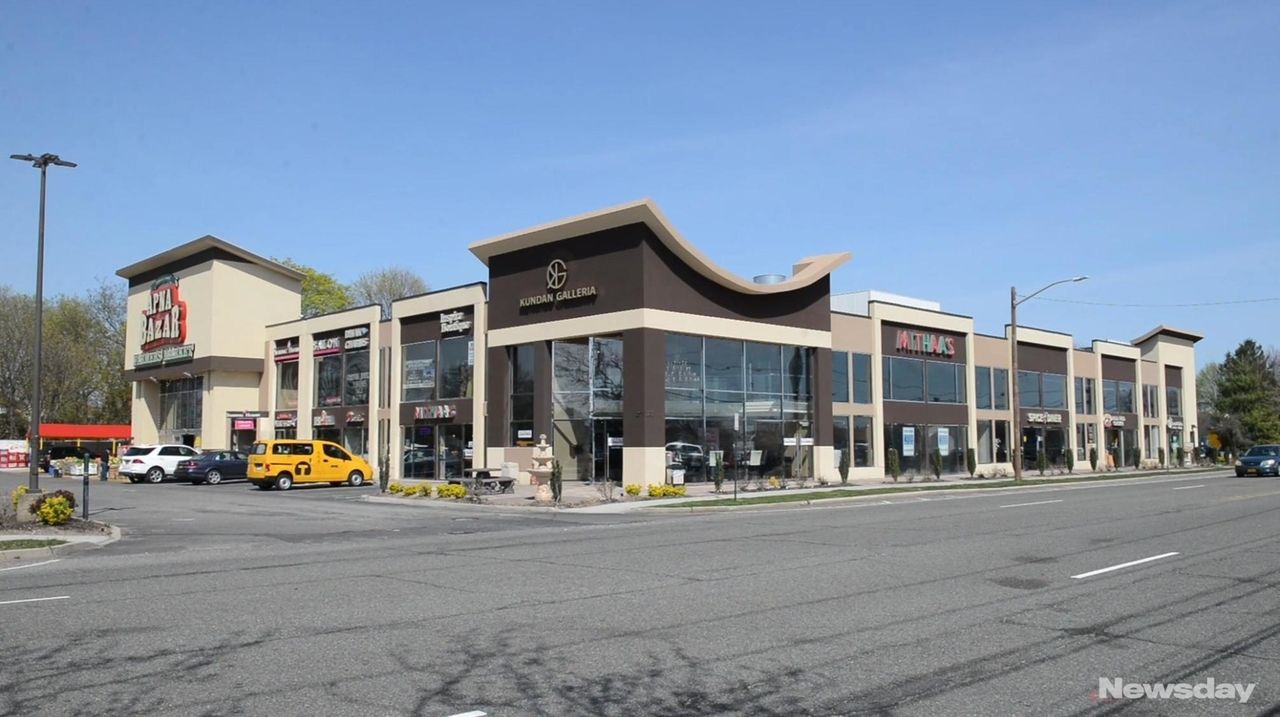 Just south of the Long Island Expressway on Route 107 is Kundan Galleria, home to five restaurants and a supermarket all offering Indian and South Asian foods.     Credit: Daniel Brennan

The three-mile stretch of Route 107 south of the LIE is chock-a-block with Indian restaurants, snack shops and grocers that showcase culinary styles and trends from all over the subcontinent. Three miles isn’t a lot of ground to cover by car, but if you are looking for an even denser concentration to explore on foot, pull off onto Bethpage Road and park at Kundan Galleria.

Anchored by the Island’s largest South Asian supermarket, Apna Bazar, the two-story shopping center houses a collection of restaurants that encapsulates all the current trends in South Asian food on Long Island. The opulent two-story 20,000-square-foot structure has a handful of clothing boutiques and beauty salons, but the focus is food: five establishments offer a range of dining options — from a full-service restaurant serving Indian, Pakistani and Indian-Chinese dishes, to quick-serve vegetarian, to halal adaptations of American fast food.

Apna Bazar, part of a small New York-New Jersey chain, opened in 2011, but it wasn’t until 2016 that the adjacent building was ready for the restaurants. And it took until this year for the property’s owner, Shudh Parkash Singh, to complete his lineup of restaurants. With the April opening of Hamza & Madina, essentially a food cart that has been brought indoors, every restaurant space is now occupied.

Shudh emigrated to the United States from the Punjab in North India in 1985. He started out with one gas station and grew his business to include many of them, plus real estate holdings across Long Island and Queens. He was at his Hicksville BP station contemplating the abandoned Circuit City across Broadway when a longtime vision of his came into focus. “I saw a shopping center full of restaurants anchored by a supermarket that could take on Patel.” (Patel Brothers, a national chain of 50-plus Indian supermarkets, opened in Hicksville more than 10 years ago).

Singh leased the three-acre property in 2011, and named it after his father Kundan. Five years later he bought it outright. From the start, he was bullish not only on the quality of the restaurants, but also on diversity of ownership. “I grew up in a Hindu-Sikh family in a border region,” he said. “Punjab straddles India and Pakistan, and I saw the hostilities between the two countries, between Muslim and Hindu and Sikh. But when I came to America, I found that people who grew up hating one another could become friends.”

Among the business owners at Kundan Galleria are Indians, Pakistanis and, for good measure, Afghans. “I am trying to break down barriers,” he said. “Not just with the people who work here, but with the people who shop and eat here too — nothing pleases me more to see customers in burqas and miniskirts, turbans and hijabs.”

From his earliest conception of Kundan Galleria, owner Shudh Parkash Singh had Mithaas in mind. When it opened last year, it was the first Long Island outpost of a New Jersey chain with locations in Edison, Jersey City, North Brunswick and Piscataway. The menu offers a broad swath of vegetarian dishes, from street foods such as dahi puri (tiny puffed fried breads filled and sauced with savories and sweets) to dosas, uttapam and other South Indian crepes; to Indochinese dishes such as Manchurian fried rice; to vegetarian curries, tandoor vegetables and breads. The restaurant’s motto is “food for every mood,” and that seems accurate (unless you are in the mood for meat). Order at the counter; your food will be brought to your table. The attractive, contemporary room has two focal points: the kitchen, behind glass but in full view, and the case of impossibly colorful Indian sweets adjacent to the cash register. Don’t leave without picking up a thick round disk of peanut brittle, brightened with fennel seeds. More info: 516-605-1230, mithaas.com

Signature petal sweets at Mithaas in Hicksville are made with jaggery (unrefined cane sugar), fruits and nuts.

The only full-service restaurant in the Galleria, Noodles & Curry originally opened as Spice Diner. To the old menu of Northern Indian and Pakistani specialties, Sohail Shabbir (who used to own Hicksville’s Lahori Kebab & Grill) has added a menu section called Indo-Pak Chinese — the dishes you would find in Chinese restaurants in India and Pakistan, among them chili-fried lamb, Manchurian vegetables and “hakka” noodles, similar to lo mein. Favorites from the old menu include chicken haryali, tandoor-roasted but instead of a red-yogurt marinade, a fresh, green one with lots of mint and cilantro. For dessert, try the kheer, a rice pudding that is tinted a soft beige from having caramelized over its 12-hour simmer. More info: 516-827-1124

Hakka noodles with chicken is one of the Indo-Pak Chinese offerings at Noodles & Curry in Hicksville.

Crown Fried Chicken, a branch of a loosely affiliated New York metropolitan area chain, is one of a new breed of fast-food restaurants that cater to customers who follow the Islamic dietary laws (halal) but are looking for regular old American-style fast food. The chicken-centric menu features meals ranging from two to 21 pieces, and the birds are meaty, with a crunchy-salty-peppery-spicy crust that really hangs on. Also on the menu: chicken sandwiches, burgers, cheesesteaks and fried-fish heros. More info: 516-938-0200

A fried chicken plate served with fries at Crown Fried Chicken in Hicksville, where all-American favorites are prepared halal.

Salem Mashriqi owns food carts in Queens and Long Island, as well as another restaurant in Commack. His first food business at Kundan Galleria was a halal cart in the parking lot, which fed workers and Apna Bazar shoppers long before any restaurants opened. Once the center was finished, owner Singh urged him to move the cart into a storefront, and if you look closely you’ll see the shop looks like a cart — complete with a window for ordering and wheels at floor level. The menu is as concise as any cart’s: chicken, lamb, kofta (ground meat kebab) or falafel over rice or gyro-style. More info: 516-822-3222

A mixed meat combo of chicken and lamb is served over rice with a side salad at Hamza & Madina in Hicksville.

If you’ve ever pondered the similarities between Indian and Mexican cuisines — the cumin, the cilantro, the chilies, the reliance on flat griddle breads, you are going to be intrigued by Desi Fire Grill. The specialty here is the kati roll, a sort of South Indian burrito wherein a fresh, paratha (whole wheat flatbread) is wrapped around a meat or vegetable filling and topped with onions, peppers and chutney. But owner Kazim Hussain also serves Tex-Mex standards (tacos, burritos, quesadillas, nachos) and American fast-food staples such as burgers and cheese steaks. Because everything is made with halal meat, observant Muslims can enjoy the whole menu. More info: 516-681-3111, desifiregrill.com

Halal beef tacos are topped with cilantro and salsa at Desi Fire Grill in Hicksville.

LI's 10 best Indian restaurantsTry everything from the tandoori meats of the Punjab to the vegetarian street foods of the south.