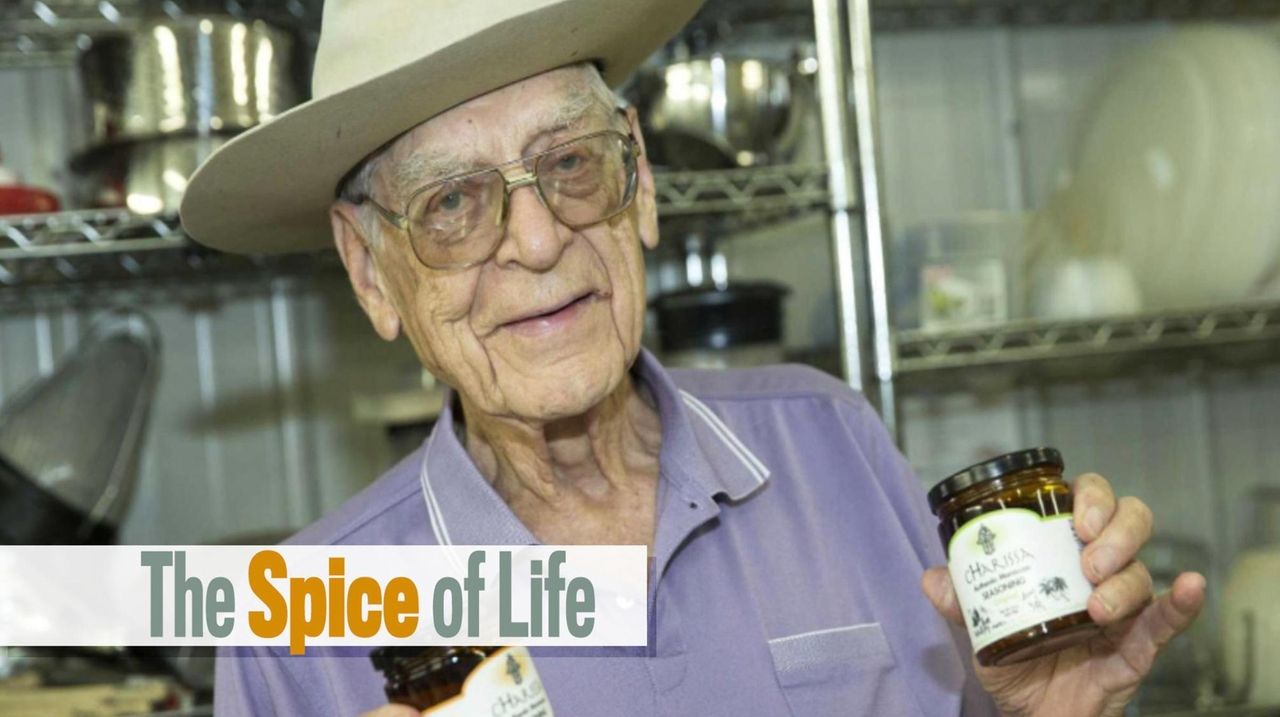 Nonagenarian Earl Fultz of East Marion finds a hot seller in cHarissa, a cumin-and-olive-oil-based condiment he bottles in tribute to his late wife, Gloria. He passionately promotes the product with the hope that one day it will be more popular than ketchup. Credit: Randee Daddona; Newsday / Jeffrey Basinger

CHarissa, the Moroccan-style condiment invented by 91-year-old Greenport resident Earl Fultz, was a big winner at Monday night's Specialty Food Association awards ceremony. The so-called sofi awards were the high point of the three-day Fancy Food Show at the Javits Center in Manhattan. CHarissa won first place in "Cooking, Dipping or Finishing Sauce," one of 32 categories judged by a national panel of specialty-food retailers.

Fultz started making cHarissa and selling it at the Greenport farmers market in the summer of 2013. The cumin-olive-oil-paprika mixture was inspired by his wife Gloria's Moroccan family recipes. When Gloria died in the fall, Fultz pushed ahead, teaming up with Jeri Woodhouse to form cHarissa LLC. Woodhouse is owner of A Taste of the North Fork specialty market in Southold and North Fork Specialty Kitchen in Cutchogue, which produces custom sauces, dressings and jams.

As cHarissa was gaining distribution on Long Island's North Fork, Fultz entered a small-business competition sponsored by Wells Fargo, and in 2014 he was selected as one of five winners (out of 3,600 applicants nationwide) who received a $25,000 grant and six months of mentoring by a team from the bank.

The 2015 Fancy Food Show, an annual showcase for hundreds of thousands of specialty foods, was the first one Fultz and Woodhouse attended. Even before the awards were announced, their booth was mobbed. "They were coming at us from all sides," Fultz said.

Fultz's goal now is to translate his award into sales. "From the beginning, I've said cHarissa sells itself better than I can," he said. "The challenge now is how to get people to taste it."

CHarissa is available online at charissaspice.com.