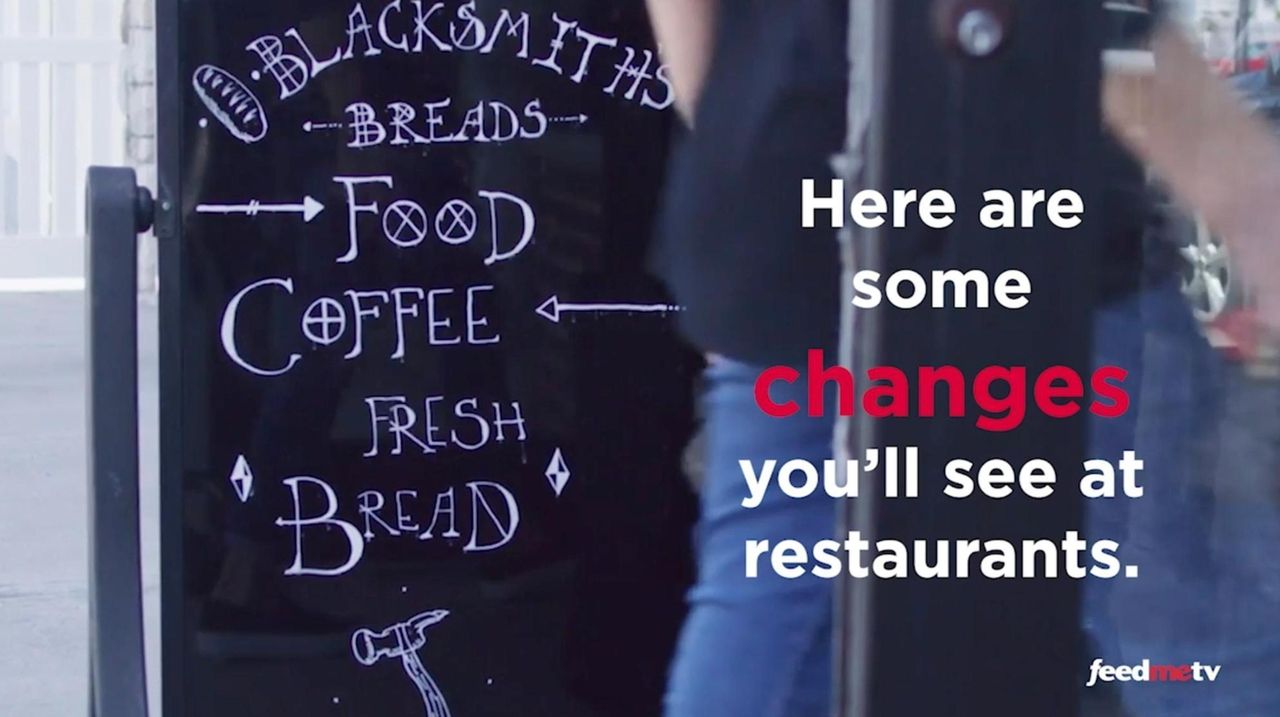 Planning on dining out now that Long Island has entered Phase 2 of reopenings? Here's what you need to know. Credit: Newsday Staff

Nearly three months since Long Islanders were able to eat at restaurants, Wednesday is the day many have been waiting for: Outdoor dining reopens on Long Island.

When diners returns to visit patios and brand-new outdoor spaces — some of them tented, many of them hastily erected or rearranged — the experience won't be quite as they remembered. Restaurants must comply with new guidelines issued by the state last week in a 13-page document.

Here's what diners can expect:

Plenty of space between tables, which means fewer seats overall.

Restaurant tables must be at least six feet apart — outdoors — and there are to be no more than 10 people at each table. That means most restaurants will be able to serve far less people than usual.

Peter Hewitson, owner of Uncle Bacala’s in Garden City Park, will be able to seat about half the number of customers he typically serves on the patio he has used for more than a decade. “Normally I can fit well over 100 people,” said Hewitson.

You may need to make a reservation, so plan ahead.

Used to dropping in at your favorite restaurant without a reservation? Don’t. Spots like Prime in Huntington, which formerly had a robust walk-in business on its patio, will no longer seat you without one. “[Customers are] used to it being walk-in only. You’d just show up and put your name on the list, and wait. We’re not doing that anymore. There’s nowhere for people to wait,” said co-owner Michael Bohlsen.

But there will be new outdoor spots to try.

Some restaurants are dabbling in outdoor seating for the first time.

Peter Van Der Mije, who owns Taco Bay in Oyster Bay, went from having almost no seating at his takeout spot to 36 outdoor seats arranged in a newly created picnic area. But as the space is only about 40 square feet, Taco Bay will be a study in sixes this summer. “Each of the six tables is six feet apart,” he said, and each will hold a maximum of six people. Employees will be on hand to ensure that the guidelines are followed, as will a sign on the periphery: “As required by state law, please maintain social distance.”

At Ruvo East in Port Jefferson, outdoor tables are a first, and will be arranged under a tent that was erected Monday next to the restaurant. Owner Joe DeNicola, who runs six other restaurants around Long Island, is uncertain how outdoor dining will play out as the summer wears on. "What about it when it's 100 degrees? It's going to be nice for a couple of weeks, then July hits and it's in the 90s," said DeNicola, who plans to add a patio to the restaurant soon, pending village approval.

Masks are mandatory — for everyone.

The new regulations require that everyone who works at a restaurant “must wear face masks at all times.” Expect to be right in step with them, because patrons need to wear masks whenever not seated at a table — including while waiting for a table or going to the bathroom.

Menus have gone disposable (or at least online), and ordering may be remote.

A theme running through the regulations: Cutting down on objects handled by multiple people, especially restaurant menus. In response, many restaurants will migrate to single-use paper menus. “Right now I have thousands of takeout menus, and 98 percent of my menu is on there, so I may just give those out,” said Hewitson of Uncle Bacala’s.

At Mara’s Southern Kitchen in Syosset, each paper menu will be followed by a phone call — from you to your server. “Please call to place your order,” reads a set of new ground rules issued by the restaurant, where co-owner Mara Levi said 10 new tables had been installed out front.

You may need to ask for condiments and use disposable flatware.

For now, restaurants must use flatware that's prepackaged, or pre-rolled in a napkin. Hewitson said that he will use the latter. “Those plastic ones that come in the plastic packet are so chintzy. But I’ll have them if people want them.”

As for those communal bottles of ketchup, hot sauce and the like parked on dining tables — they're generally on pause, too, as guidelines suggest (but do not mandate) single-use condiments. Raquel Wolf-Jadeja, who owns The Onion Tree in Sea Cliff with her husband, Jay Jadeja, said salt and pepper shakers will only be brought out upon request. “When that table is finished, they will be taken back and sanitized.”

Speaking of which: There'll be sanitizer everywhere.

The sanitizer shortage will be a distant memory at restaurants, where the stuff will be mounted on stands, in bathrooms and even delivered as individual towelettes to tables, as at Ruvo East in Port Jefferson. “We’ll also have little framed stands that tell you this table has been sanitized,” said DeNicola.

Hewitson has also ordered thousands of antiseptic towelettes. “I figure I’ll put them on the table and people can keep wiping things down if they want.”

One at a time to the bathroom, please.

No more going to the bathroom in pairs, at least for the time being. At Prime in Huntington, the path from the porch to the restrooms is now clearly visible, thanks to six-foot demarcations. "We’ve always had bathroom attendants, so we’re lucky,” said Bohlsen, but such employees had typically only been scheduled for busy nights. “Now we’ll be there all the time and sanitizing after each use.”

Levi said that at Mara’s, the dishwasher will be responsible for wiping down every inch of the bathroom between single uses, which offers insight into how many employees will be doing double-duty in still short-staffed restaurants.

After guests make a reservation, “we’re making it very clear that there are time limits based on the number of guests in the party,” Bohlsen said. “We want to take your order as fast as possible, so that once your order is done, you can sit here and relax."

The same principle holds at Mara’s. “We are encouraging people not to linger,” Levi said. “That’s kind of always been our policy, that when people arrive, I tell them when the next reservation is at that table.”

Despite the new restrictions, dining out will be a unique, and evolving, experience.

“Like everything else in this pandemic, this is a work in progress," said Wolf-Jadeja of The Onion Tree. "I don’t know what we are staffing for. Will there be a swarm of people, or slim pickings? We just don’t know where it will take us.”

New wood-fired pizzeria opens in North Bellmore
Beloved family-owned bakery in Floral Park opens new bistro
Oktoberfest bar crawl coming to Wantagh this weekend
Have eyeballs and bones in your dinner at this Halloween pop-up
LI's ramen boom: 5 new places you have to try
FDA spells out lower sodium goals for food industry
Didn’t find what you were looking for?