Most of us can appreciate the mulberry-colored buttery sourness that is properly cured cow’s navel. But today we are not talking about pastrami’s casual fans. Today we are talking about people for whom every life event is accompanied by pastrami — from brises to baptisms, weddings to holiday gatherings, birthdays to shivas. It’s hard not to love a meat that exists to reclaim all we’ve lost, that draws a line from boatloads of immigrants to journeys of our own, that champions resilience, that wagers today will be just like yesterday and tomorrow will be just like today.

They are the pastrami faithful. 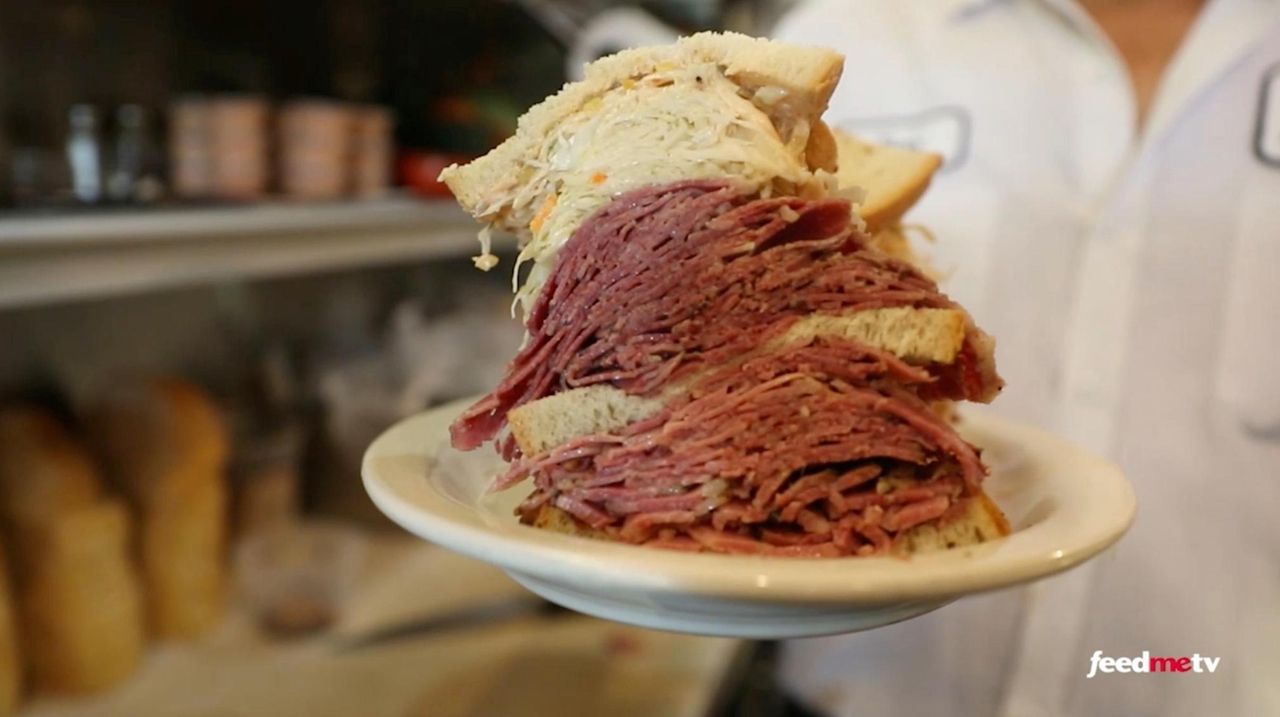 Long Islanders and their love of pastrami Newsday food reporter Scott Vogel visited delis around the Island to find out why Long Islanders love their pastrami sandwiches. Credit: Randee Daddona

“He sat right over there,” says Joan Matthews, referring to a man who, until he entered a nursing home last year, could always be found at a small table in the corner of Pastrami King partaking of its signature offering. Every day. For 15 years.

It's 5 p.m. on Friday, too early for the dinner rush, and the Merrick deli is bathed in a rare, church-like silence matched perfectly by the solemnity of Matthews' husband, John.

“Once you taste this food — oh my God,” says John, a retired Queens cop.

“It’s moist, it’s juicy,” adds Matthews, a special-needs teacher. “You can get it a little fatty if you want, a little lean if you want, whatever cut you want. Droves of people come here just for the pastrami.”

The mile-high sandwiches arrive, and they live up to the hype — the pastrami is sliced impossibly thin, a meat mille-feuille. And yes, when tucked between planks of rye bread painted sparingly with deli mustard, pastrami even approaches the sublime. But taste alone hardly explains the special appeal of the meat, which first sprang to life in the 19th-century Jewish delis of New York’s Lower East Side, and became a cultural touchstone for Jews and non-Jews the world over. These are the ones for whom pastrami seems almost inescapable, particularly during life’s vicissitudes, the moments that changed everything.

In 2010, John Matthews, along with Joe Yamali, Pastrami King’s owner, rigged a surprise party for his wife Joan Matthews' 60th birthday. “The pastrami and all the food had been ordered and everything,” recalls her husband. And then, a few days before the party, he was bitten by a mosquito carrying the West Nile virus while working in the garage. Several hours later, he grew ill, and then gravely ill. He was rushed to the hospital the day before his wife's birthday.

“Literally, we had to call Joe the night before and cancel,” Joan Matthews recalls. Her husband would remain hospitalized for months, a period during which he was on a ventilator, fell into a coma, battled encephalitis and nearly died. Yet within weeks of his recovery, the Matthews were back at Pastrami King, where they’ve been dining at 5 p.m. on Fridays ever since. As John went from health to illness to health again, pastrami was the one constant.

After spending three months in the hospital, John Matthews went home, only to face several months of rehab, much of it while wheelchair-bound. And then, almost nine months to the day, the disease finally lifted. What’s the first thing he did? Throw his wife that 60th birthday party.

A SLICE OF NOSTALGIA

“When somebody says ‘this reminds me of something I had when I went to my grandmother’s,’ then I know I’m on the right track. That is probably the greatest compliment they can give me,” says Wally Goetz at his Lido Kosher Deli in Long Beach. It’s the only place on the Island I’ve found that cures, smokes and steams its own pastrami entirely on the premises. The results are dazzling. It is juicy and lean at once, all the seasonings — coriander, pepper, mustard seed — perfectly calibrated.

“When somebody says ‘this reminds me of something I had when I went to my grandmother’s,’ then I know I’m on the right track."

“Let that taste build in your mouth, because it’s got a really nice after-flavor,” counsels Alex Rosenberg, who is also at the table, along with Goetz’s 24-year-old son Russ. Rosenberg, a lawyer, has been a loyal Lido customer since at least 1976.

The lunch crowd begins to arrive, an endless stream of young and ancient. Indeed, the longer I stay and the more pastrami I eat, the more Lido’s diners start to bear an uncanny resemblance to the Jewish immigrants in old newsreels, arriving by boatloads in New York Harbor. “The kosher deli was the hangout for people new to this country,” Goetz says. “It helped ease the pain of leaving home.”

Hugo Weinberg, Goetz's grandfather, who emigrated from Germany in 1930, started the family’s first deli in the Bronx. I hear of the family’s move to Brooklyn, where they became the leading pastrami provider to kosher delis in New York and beyond. That facility ceased operations a few years back, at which point   Goetz made the difficult and expensive decision to begin making pastrami in-house.

“I have customers I don’t see all year, but on Rosh Hashanah I can guarantee I’m getting an order from them,” he says. “They want something from their youth, they want something that reminds them of their mother or grandparents sitting around the table with matzoh ball soup …. They want tradition.”

A LINK TO HER FATHER

When Rebecca Stern, a schoolteacher from Bellmore with a Catholic mother and Jewish father, was a child the world of the deli was a mystery to her. That all changed the day her father took her to Pastrami Plus in East Meadow when she was a teenager.

Rebecca remembers her first visit to Sal Gawish’s deli. “It was just this nice little place we found that reminded Dad of sitting down and eating a big dinner with his family.”

Soon, she learned the joys of pink shavings of meat packed between slices of rye. “It was juicy but not too fatty, it melted in your mouth, it was a nice-sized sandwich and it definitely made you full.” She and her dad began visiting Pastrami Plus twice a month.

“A lot of the staff doesn’t know anything about my personal situation,” Stern says, “but they’re so kind to me, it’s almost like they do.” The situation is that her dad has now passed away. Sometimes when Stern comes to Pastrami Plus, she is alone. It’s a bittersweet experience to walk into Sal’s deli, where the aromas of soup and cooked meat are inescapable. But those aromas help her reclaim what’s lost. “It’s just a hole-in-the-wall, but it feels like home to me,” she says softly.

A BEACON THROUGH ILLNESS

“This place has the BEST,” insists Carole Traster-Wilk. “Now, I’m not saying that there is nothing that can be the equal, but nothing could be better.”

The best pastrami on the Island this time is at Pastrami N Friends, a kosher deli in Commack. Traster-Wilk, who’s eaten there for 30-plus years, is emphatic about this. Indeed, the only thing she is more emphatic about is condiments. “It needs to be eaten as the Jews eat it,” she says, meaning with mustard or Russian dressing or even coleslaw, anything but mayonnaise. “Never mayonnaise.”

The sandwiches arrive — half lean, half juicy, and all steamed to perfection. The pastrami is equal parts smoky and tangy, Traster-Wilk and I decide, as she recounts a story from a few months back, when she began experiencing strange sensations if she bent her head forward. “I thought it was carpal tunnel.” It turned out to be multiple sclerosis, and when she broke the news to her best friend, he turned white. “I didn’t like his look,” Traster-Wilk recalls. So she told someone else important to her, Ernie Quartarone, the guy behind the counter at Pastrami N Friends.

Traster-Wilk gazes around the dining room, which has hardly changed since the deli opened in 1975. “This place will always be like this.” She herself faced changes in the weeks ahead — she’d receive infusions of Benadryl and steroids to slow her disease’s progress. But she would still come to the deli, for the pastrami, for owners Ronny Roman and Ernie, and of course for the thing everyone seeks at Pastrami N Friends — assurance that life will always stay just as it is.