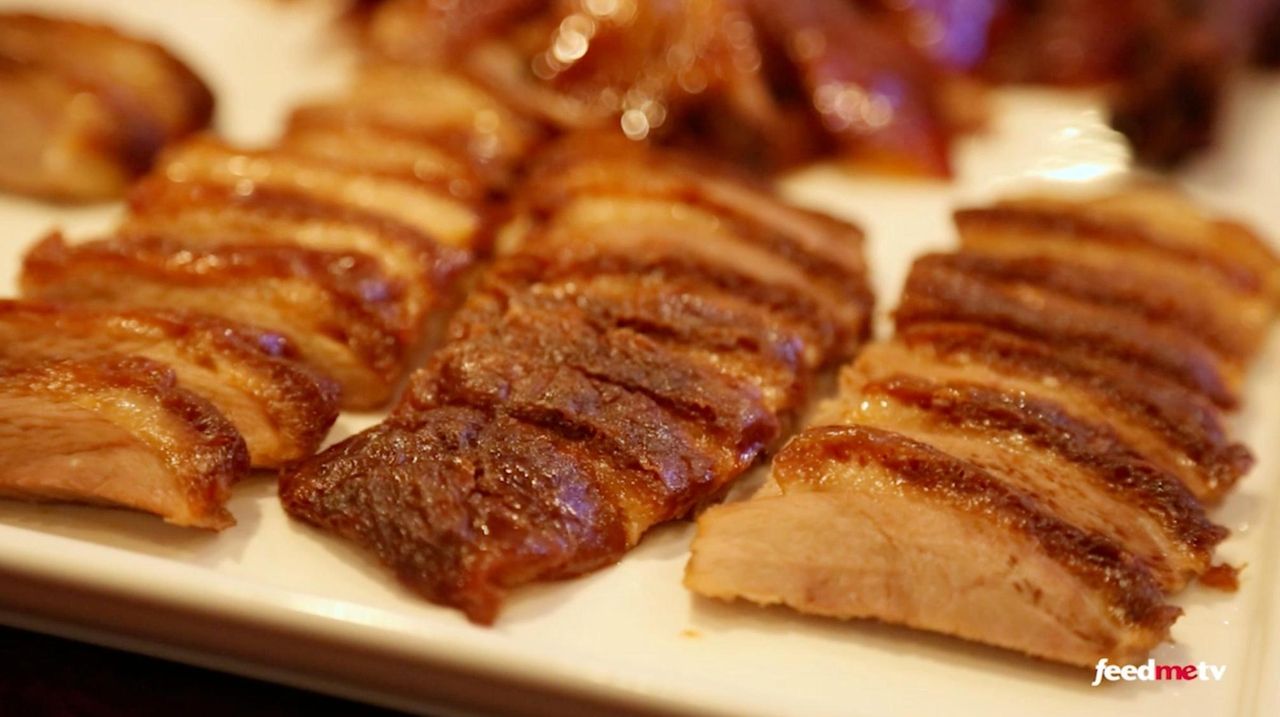 AMBIENCE: The capacious bar and dining room are utterly occidental and tend toward clamorous.

ESSENTIALS: Open for dinner every day but Tuesday, for lunch and dinner on Saturday and Sunday. Takeout lunch available every weekday but Tuesday. Call ahead for wheelchair ramp, municipal parking lot around back.

Cantonese Strikes Back. Return of the Cantonese. Cantonese — A New Hope.

No matter your preferred Star Wars allusion, the opening of Long Island Pekin in Babylon signals that, right now, the Force is clearly with Cantonese cooking.

Over the last few years, almost every exciting new Chinese restaurant on Long Island has specialized in the fiery cuisine of Sichuan (and I am not complaining; let a thousand ma-po tofus  bloom). But Long Island Pekin reminds us of the first Chinese foods many of us fell in love with: the roast duck and pork, the lo mein and fried rice, the steamed dumplings and pot stickers. And, at this four-month-old restaurant, these specialties of what used to be called Canton (now Guangdong, China's southeasternmost province) bear little resemblance to what you’ll find at your local takeout.

Let’s deal with name straightaway: Pekin is not a misspelling, it’s the duck that connects Long Island with China. (Stay with me here.) The first flock came to the United States from China in the 19th century, became the leading breed for duck meat production and was raised so intensively in Suffolk County that it came to be known, simply, as Long Island duck. (That's a very very big Pekin duck sitting alongside Route 24 in Flanders.)

At LI Pekin, the duck is prepared in two styles, Peking and Hong Kong, and both are worth the trip from anywhere on the Island. The Peking duck undergoes a battery of pre-roasting rituals — pumped full of air to separate skin from flesh, bathed in hot water, hung to dry for three days — before being seasoned and roasted. The result of these ministrations is moist but greaseless flesh with shatteringly crisp skin that’s a deep, translucent amber. Once presented to the table it will be whisked away to be carved and it’s a shame that this is not done tableside because once you’ve seen chef-owner Jason Lee perform this operation you will want him for your next appendectomy. The duck is served with plump, white buns, slivered cucumber and scallions and hoisin sauce so that you can make your own sandwiches.

A whole Peking duck will run you $59, but is more than enough for two people. The Hong Kong duck costs $48 and is also available as a half duck ($26). Preparing this less-exalted bird is a lot less complicated, but the results are just as finger-licking good, so long as you don’t mind a little duck fat (more precious than the meat, in China) and you don’t mind licking your fingers: the bird is hacked into bone-in pieces and, unless you are prepared to pick and gnaw, you’re going to miss a lot of deliciousness.

Now both of these ducks are roasted in what’s known as a “hung oven” (so named because the meats are suspended from hooks rather than laid in roasting pans) and the third great dish to issue therefrom is the char siu, pork marinated with, among other things, honey, molasses, rosewater, five-spice powder and soy, then roasted to toothsome succulence. Traditionally done with pork shoulder, here it’s made with pork jowl (guanciale, in salumi-speak) which renders it even more succulent.

The final item in LI Pekin’s main-dish lineup is Hainanese chicken, which originated on the Chinese island of Hainan, but is popular all over Southeast Asia. It’s a poached bird, bland on its own but intended to be gussied up with the accompanying ginger-scallion relish and sweet soy. In China, poached chicken is often served pink at the bone, at which point it displays a lush tenderness. LI Pekin’s kitchen, quite understandably, is cooking their chickens to a more LI-friendly doneness, but without that distinctive texture the bird falls flat.

If you’re not prepared for a full-on roast-meat extravaganza, the duck and pork (as well as shrimp, vegetables and chicken) make their way into heaping platters of fried rice and noodles both thin and thick. And if you’re not eating meat at all, take comfort in what I’m going to pronounce the best string beans on the South Shore, their glistening surface showered with delicately fried garlic.

Start your meal with either the textbook steamed crystal-shrimp dumplings or the pan-seared pork-cabbage-chive dumplings, fat little bruisers that can barely contain their filling. The chicken version is almost as good. Skip the soup dumplings, limp of skin and lacking unctuous porkiness. Two more “innovative” appetizers, salt-and-pepper chicken wings and soft-shell crab bao both suffered from an unnecessary sweet saucing.

Long Island Pekin exhibits many amenities lacking at Long Island’s other top-notch Chinese restaurants: imaginative cocktails (and a separate bar at which to imbibe them), a thoughtful wine list, a manageable menu and servers, fluent in English, to explain it fully. And yet, it evinces a certain bland soullessness.

The decor is partly to blame: Nothing in either the dining room or bar gives the barest hint that this is a Chinese restaurant. Instead, you’ll find the same sturdy chairs and faux-reclaimed wood wainscoting you’d find in any sports bar. The windowless walls are bare, except for some inoffensive candles and a looping video of inspiring nature scenes. On a busy night, the dining room can be so loud it’s hard to hear your companions.

Such superficial concerns are, of course, easily addressed, and I hope Lee and his team do so in the coming months. In the meantime, just tune it all out and focus on the roast duck.