As art forms go, pizza-making has a famously uneasy relationship with the avant-garde, its practitioners distinguished by a timid overreliance on marinara, low-moisture mozzarella, canned mushrooms and greasy pepperoni. Except here. The daring pizzaiolos and -iolas of the Long Island School (circa 1967-present) are fearless, experimental and passionately backed by a pie-mad public which eggs on such inventiveness, if only so it can consume pizza constantly without growing bored. Elsewhere, a pie topped with chicken and waffles might elicit derisive jeers. Here on Long Island, it’s just another Wednesday night.

And yet somehow our hand-tossed pioneers have not achieved universal renown. In part, this is the fault of the critical establishment, self-appointed foodie dough-it-alls whose knee-jerk response is to brand pizzas with, say, Tater tots and marshmallows as beyond the peel. Furthermore, much of our artists’ best work is produced at by-the-slice establishments rather than so-called "serious" pizza parlors, whose 15-inch-diameter pies get all the respect.

While LI’s geniuses of the slice often push the bounds of taste — in both senses — they are also proof that this is a thriving community of pizza artists.

Be they square- or sector-shaped, thick or thin, traditionalists or neo-politans, these are Islanders baking up work that’s exciting to see, and sometimes even to eat.

For some, it will always be an attention-getting gesture or a crass attempt at provoking outrage, but those are people who have never tasted a chicken and waffles pizza from this Islip vanguard. Yes, it thumbs its nose at the pizza establishment, but it also fills the nose with sweet notes of hot maple syrup, courtesy a last-second, harum-scarum drizzle. Bits of chicken, battered and fried to a crisp, stand up well to the sweetness even as they add a much needed tawny note of visual contrast. But it’s the waffles that prove the masterstroke. Torn into cubes and arranged as if hurled onto the pie from across the room, they make for a cute and angry tumble, like a toddler’s blocks after a tantrum. ($30)

Previously celebrated for its Warholian tomato soup and grilled cheese slice, this Massapequa Park staple has not rested on its laurels, baking a Tater Tot pie that is less Ore-Ida than ore-ganic, particularly in its use of potato pieces, which give the impression of being randomly scattered. Mozzarella and Cheddar shreds glaze the tots, lending them an encaustic quality and restoring their crunch in a way that puts many pie-potato efforts to shame, or would if there were many such efforts. Sadly, space does not permit discussion of the bacon slivers, which bring a splash of red to an otherwise monochromatic slice, with all that this clash of primary and secondary colors implies. ($25)

Fourteen toppings, three sauces, two locations — this is Wagner’s Gesamtkunstpie, a total work of pizza. It is also a taco pie, an 18-inch Ring Cycle, a pizza as ambitious as it is unwieldy. (Could any crust offer a stage sturdy enough for this cast of thousands?) But it’s an East End charmer nonetheless, courtesy a colorful kaleidoscope of toppings (black beans, corn, red and green peppers, Cheddar cheese, grilled chicken, ground beef, tomatoes, you name it) set against a backdrop of chipotle sauce and Cajun dressing. Is this a slice of cultural appropriation? Certainly. But questionable taste has never tasted so good. Besides, Frida Kahlo left no surviving pizzas. ($31.95)

At once a sly comment on pizza’s birthplace and an interactive piece whose meaning changes according to one’s angle of attack, the flag-shaped tri-color slice at this Old Bethpage pizza place opts — unlike its referent — to put red stripes next to green, and insist that orange is the new white. In consequence, the strip, ordinarily a nod to the Italian Alps, here evokes not Mont Blanc but Mt. Etna mid-eruption. (Also, the pie emerges from the oven Sicilian-shaped and hotter than lava. Coincidence?) The velvety flow of sauce and molten cheese, meanwhile, is framed by a crust that is crunchy, buttery and essential for the purpose of rotating a slice 45 degrees, whereupon it resembles something Mondrian might have painted as a child. ($23.90)

Like Charlotte Brontë, Harper Lee and Orson Welles, this Huntington pizzeria has authored just one masterpiece, but it continues to bring joy to generations of pie lovers. We’re talking, of course, about the cold cheese slice, in which fresh-from-the-oven goodness is topped by a generous layer of room-temperature shredded mozzarella just before serving. What might have been little more than truth-to-materials gimmickry is instead a slice like none other. The mouth is disoriented yet delighted by the reverse temperature inversions, while the roof of said mouth is relieved that for once it will escape being scorched beyond recognition. "As simple as it is ingenious," wrote the Royal Swedish Academy of a tool that won its inventors this year’s Nobel Prize in chemistry. That Little Vincent’s has not yet received the same prize is an enduring stain on the committee. ($4.45/slice) 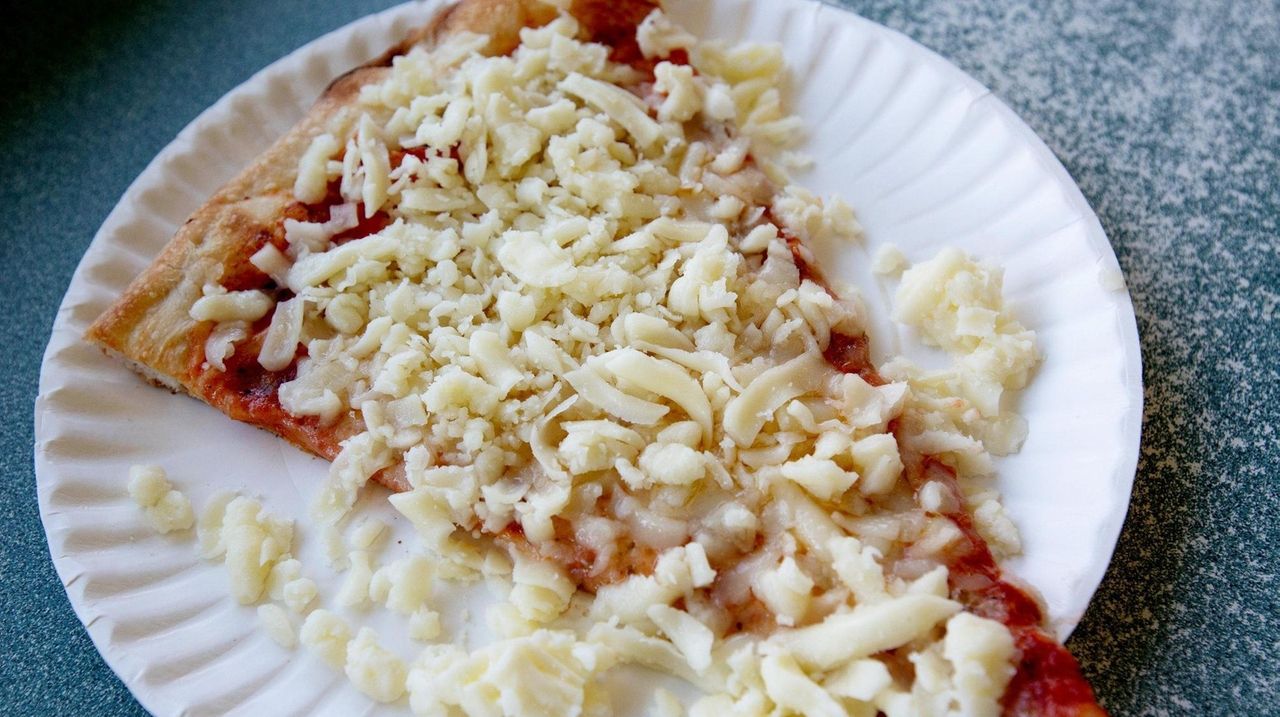 At first glance, there would seem nothing shocking or groundbreaking about a tortellini carbonara pizza, at least by comparison to the rest of this list. But great art encourages us to see old things in new ways, and by that measure, this East Setauket pie is an unqualified triumph. If not for the liberal sprinkling of peas, Via’s effort would be monochromatic and blindingly white, a bubbling blanket offering few clues to what lies beneath: pillows of pasta floating like inner tubes in a stagnant pool of cheese-spiked carbonara. The name sets off alarms, conjuring images of runniness and stained clothing, but the pie is anything but. A generous cheese pull gamely steps in for tomato sauce, while the leopard-spotted crust provides contrast both visual and textural. ($21.95-$29.95)

Largely due to their target audience, dessert pizza artists’ contributions to the canon are often ignored. Which is a shame, because the Caramelo and That S’more at this East Norwich pizzeria, thin crusts both, are pies for the bambino set with true crossover appeal. In the first, what might have been a tan color-field painting of dulce de leche is abruptly interrupted by a continuous squiggle of chocolate syrup, an obvious homage to Pollock’s drip technique. Similarly abstract is the s’mores pie, whereupon a Nutella base and spiral of syrup labor mightily to anchor perfectly toasted mini-marshmallows forever threatening to leap from the pie. ($9-$9.99)

Carb bomb or brutalist monument? That’s just one of the questions posed by this Farmingdale parlor’s deep dish rigatoni pie, the construction of which will leave you slack-jawed, and the consumption of which will leave you lock-jawed. As with the Pyramids, no one really knows how such a marvel is built, although a slurry of vodka sauce no doubt has something to do with it, as does a thick canopy of melted mozzarella. Perhaps most impressive: a kiddie pool-sized crust that somehow manages to be chewy, soft and wonderfully stress tolerant. On an island awash in ziti slices, this pasta pie reigns supreme. ($27)

Madonna, Cher, Shakira, Joanne — like her sisters, this one-named standout is a diva both ageless and fierce. Who else would have had the guts to take on Swanson with a Hungry Man meat & potato pie? No one, that’s who. And while creating a pizza superior to a frozen TV dinner might not seem like much of an achievement, this Roslyn pie, unlike its namesake, actually is hearty enough to feed most any hungry human. Generously stacked with chunked beef and spuds, goosed by barbecue sauce, and formidable even in personal pan form, this is pizza with the power to banish every painful memory you have of Salisbury steak, brownie compartments and a latchkey childhood. ($14-$36)

It was Kandinsky who brought color studies to the worlds of painting and aisles of Ikea, and this East Meadow shop did the same for the world of pizza. A riotous assemblage of red (marinara), green (pesto) and amber (vodka) circles-splotches, the MVP is a pie in which discrete elements combine to create a visually spectacular experience over a thin but soft crust. Thoughtful attention is given to the taste buds as well. Each dollop has its own unique flavor, thus ensuring that no man bites into the same pizza twice, as Heraclitus memorably put it. ($26.07)

For better or worse, the Big Mac is an instantly recognizable symbol of American culture around the world. Around Huntington, it is also a pizza, and one with an uncanny resemblance — in flavor and breadiness — to the original, utilizing ground beef, raw onions, pickle slices and cheese to dazzling effect. Close your eyes and you can almost see a dollar menu. But Southdown’s pie is more than a happy meal. While the special sauce offers palatal pleasures that are spot-on, the chartreuse-heavy palette suggests a more nuanced view of the Golden Arches. (Burger King gets the same treatment in Southdown’s Whopper.) In short, this is a pizza whose take on consumerism remains stubbornly ambivalent, a Roy Lichtenstein painting in pizza form. ($24-$26)

Other works: The Whopper, chorizo jalapeño

Pie-makers and pie-lovers alike avoid healthy green vegetables because, well, it’s pizza. But this bold shop has been going its own way in Williston Park for more than 40 years. Witness its asparagus and breadcrumbs pie, which challenges and satisfies at once. Your eye goes immediately to the central spears — they emerge from the oven neither wet from asparagus juice nor desiccated beyond recognition — and the sparkle dust of crumbs which recalls dew on unraked lawn clippings. Even more impressive, however, is the square-cut crust cradling it all. Rather than cloak each slice in melted mozzarella, thereby compromising its asparagus statement, Gino’s opts to bake cheese into the crust, an ingeniously delicious solution. ($24)