Snack bars are having a moment: The food, from loaded hot dogs, classic flat-top cheeseburgers and onion rings to floats, shakes and soft-serve, is casual and carefree, and new traditions — who’s up for blistered shishito peppers? — are making a mark. Here are five favorites.

If slotted into a family tree of Long Island restaurants, Flo’s Luncheonette in Blue Point could be the family matriarch. Calvin Coolidge was still president when the first toasted sandwich slid from the grill at the roadside snack bar that Flo Kimball opened a block from Corey Beach in 1926 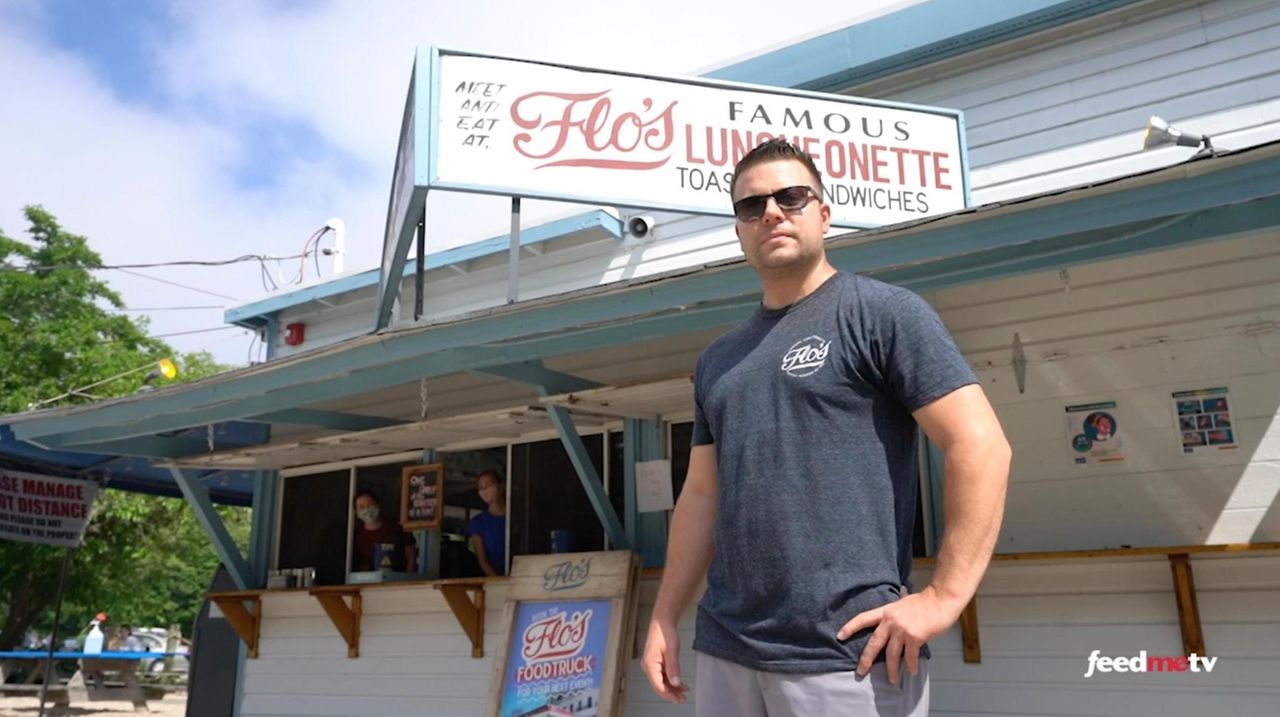 How this 94-year-old snack bar has stood the test of time Connor Vigliotta, owner of Flo's Luncheonette, talks about taking over Flo's legacy after working for his father at the Blue Point snack bar since he was a teen. Credit: Randee Daddona

Back then, hotels dotted this now-residential neighborhood, and a row of stools lined this out- door lunch counter. The stools have been replaced by picnic tables, but beach vibes still prevail, and long lines form every summer day to order from the window — burgers, waffle fries, egg creams or the famous Flo dog, served on a toasted potato bun.

Owner Conor Vigliotta ensures everything has a cheffy touch, from the fried-scallop wrap and crisp Maryland crab cake sandwich to guacamole laced with corn and black beans.

The burger is much the same as it was decades ago, and you can still cool down with a Flo’s Fizzle (vanilla ice cream with orange soda) but there’s now a covered outdoor bar where you can snag a local beer or fruity cocktail. Sip yours at one of the umbrella-topped picnic tables or stroll down to the beach, where Flo’s taco-shack sister, Floasis, presides over the sand. — Corin Hirsch

Is it the simplicity of steamroller-flat patties encased in old-school buns, a combo guaranteed to conjure that long-gone world before burgers were the stuff of kitschy kings, pig-tailed girls and billions and billions served?

No, it’s got to be the unreconstituted fries, crunchy russet spears that scoff mightily at the idea of shoestring anything from inside their grease-stained paper bags. Or the throwback shakes — available in just three flavors but more convenient than the ones at Marshall’s Ice Cream Bar, a sister shop that’s all the way across the parking lot. Or the way the place, despite decades of popularity, still hedges its bets by including tuna sandwiches and knishes on the menu. Whatever it is, All American is the quintessential Long Island snack bar.

Since 1963, the stalwart, a beloved holdover from the days of burger stands bedecked in red-and-blue neon — and so crucial to Massapequa’s identity there’s even a picture of it on the town’s Wikipedia page — has been serving up jillions of burgers an hour to Islanders only too happy to brave long lines for the chance to scarf down their prizes on the way back to the car if the picnic tables outside are taken — and they’re always taken. 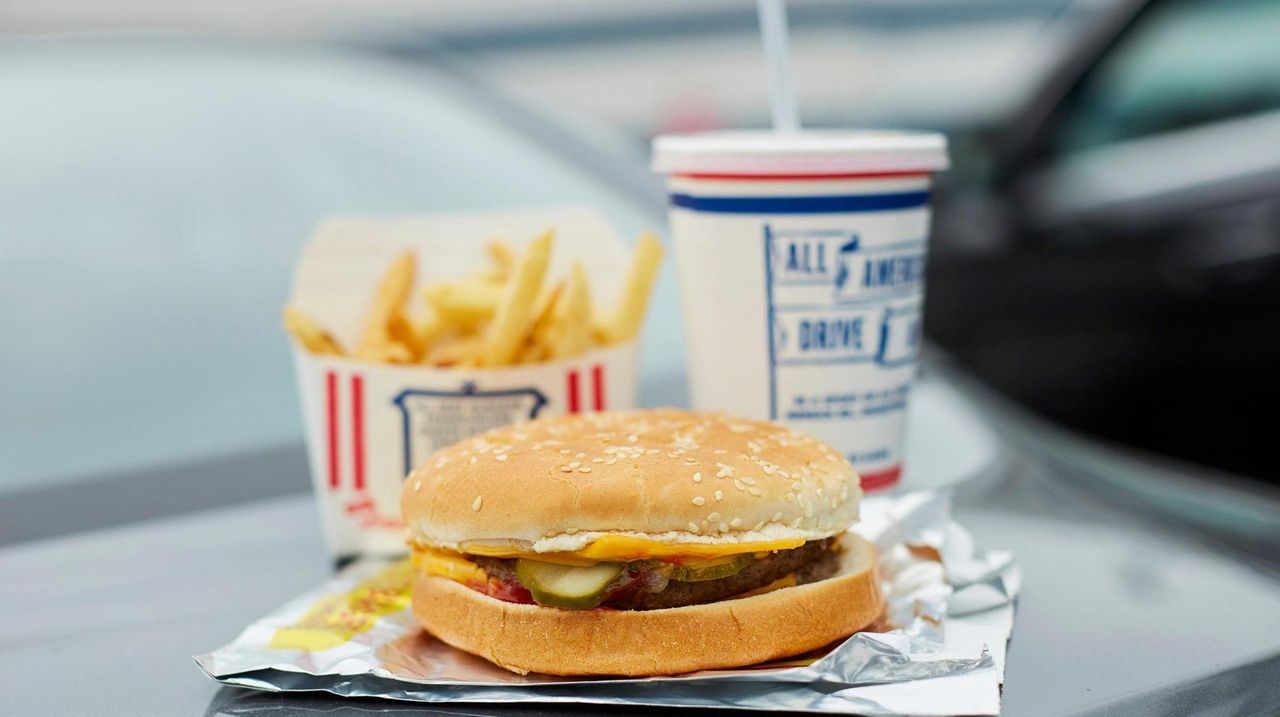 Squint and you can almost see the cavalcade of before-they-were-famous fans, folks like Alec Baldwin and Jerry Seinfeld, both of whom went to high school nearby and still stop in for a taste of the way Long Island was, is now and ever shall be. — Scott Vogel

A freethinking yet focused chef itching to break out of the fine-dining box gives this Greenport landmark a rare and welcome edge. Jennie Werts, 35, has a culinary pedigree that includes stints in Manhattan as a corporate chef at Credit Suisse and chef de cuisine at Richard Sandoval’s Latin-Asian restaurant Zengo. But you could argue that this French Culinary Institute graduate’s most formative experience took place on the North Fork, where she spent childhood summers.

“Every Sunday, we went to Drossos to play miniature golf,” she said. “My brother, Andrew, and I grew up eating at the snack bar.” The family- owned little complex, which includes a motel as well as the golf course and snack bar, has been in business more than 60 years. Three years ago, Werts partnered with her brother and the owners to open a pop-up at the snack bar. “I’ve known the family since I was a baby,” she said. “I didn’t want to change it drastically — I wanted to keep the charm and still appeal to locals.” 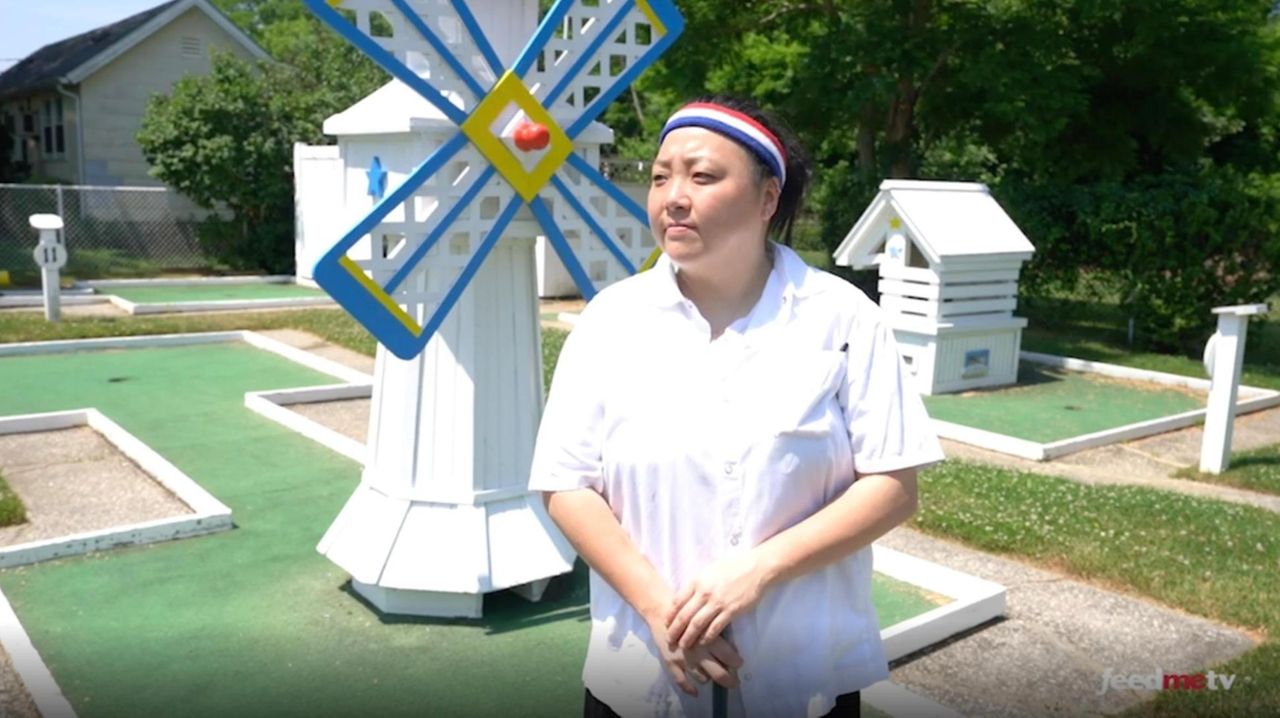 She spent her summers at this snack bar. Now she owns it. Jennie Werts, chef-owner of Jennie's at Drossos, talks about opening a pop-up snack bar at Drossos Hotel in Greenport, a spot where her family has played mini-golf since she was a child.  Credit: Randee Daddona; Photo Credit: Yvonne Albinowski, Jennie Werts, Jim Fredriksson

And therein lies the beauty of Drossos: a chef who had the confidence to leave that unmistakable, irreplaceable patina untouched while elevating the menu offerings in a way that speaks to a younger, more food-forward clientele. Yes, you can still get a cheeseburger or the fried chicken, but you’ll also find spareribs bathed in a barbecue sauce resonant with gochujang, a Korean red-pepper condiment that packs a robust yet mellow wallop, and tempura broccoli given a tangy freshness by Catapano goat cheese, made about eight miles away in Peconic.

One standout side: the flash-fried shishito peppers, tossed in citrusy yuzu salt and the Japanese seven-spice powder called shichimi togaroshi. They are addictive. One thing Werts wouldn’t dream of changing, though, is the soft-serve (see cover). “There is something about the machine, the pressure,” she said. “This soft-serve is dense, creamy and thick. It’s magical.” — Jane Lear

There’s always been a snack bar here,” said David Zelinger, co-owner of this tiny spot located two blocks east of where Long Beach’s boardwalk ends. His research into the property that he and two partners took over in 2018 revealed that the last wooden shack was blown away (along with much else in Long Beach) in the great hurricane of 1938. The current snack bar, concrete, dates from 1954 and, while 2012’s superstorm Sandy was “not kind to it, it needed the washing out.” 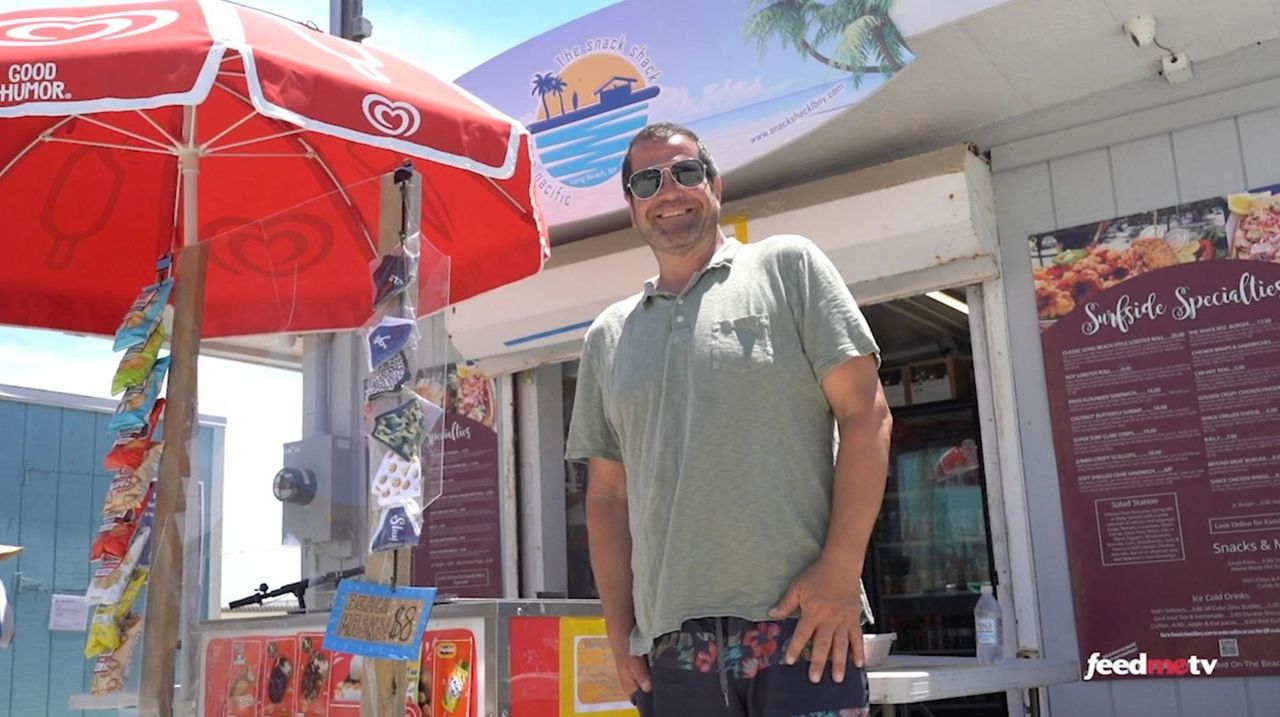 The coronavirus pandemic, by comparison, has only highlighted its strengths. While it usually opens for Memorial Day, this year Snack Shack opened a month early to serve neighbors desperate for takeout. And with the return of outdoor dining, its beach-adjacent (and vast) “Shackyard” can easily accommodate more than 100 socially distanced diners.

The partners all have culinary connections: Mark Goldsmith is an investor in several city restaurants; Gregg LaPenna is a longtime Long Beach restaurateur; Zelinger himself went to culinary school and cooked in Manhattan at La Caravelle and Naples 45, among other kitchens, before transitioning to finance and, now, software sales.

The menu fuses snack bar standards with ingredients that skew higher-end. Burgers are hand-formed on site, tomatoes are heirloom (in season) and hot dogs are Certified Angus Beef brand. Behold the Landshark, a hot dog served in a buttered split-top roll and topped with chopped pickles and red onion.

Lobster figures in lobster rolls, of course, but also as a topping on the Sunshine Burger and as a co-star in the BBLLT, along with bacon, more bacon, lettuce and tomato. And the Kraken features a fried soft-shell crab topped with lobster salad and bacon. Dietary abstainers can groove on the Mermaid Burger, a Beyond Meat vegan patty on a gluten-free bun with baby spinach, beefsteak tomato, fresh cucumber and red onion. — Erica Marcus

With its back-sloping roof and glass front, Sid’s All American retains the bones of the Carvel it originally was. Its manager, Sean McCalmont, recalled back when he was a student at Glen Cove High School. “We would play baseball in the field just down the hill and, when we won, we’d come up and have ice cream.” Now, he noted, “everyone gets ice cream, whether they won or lost.” And, at Sid’s, they get a lot more than was served at Carvel.

By the time current owner Ross McCalla bought the property in 2014, it had morphed into a burger stand and, briefly, into Philly’s & Cream, specializing in cheesesteaks. McCalla and his team kept the burgers and the cheesesteaks (and the ice cream) and set about upgrading the menu. 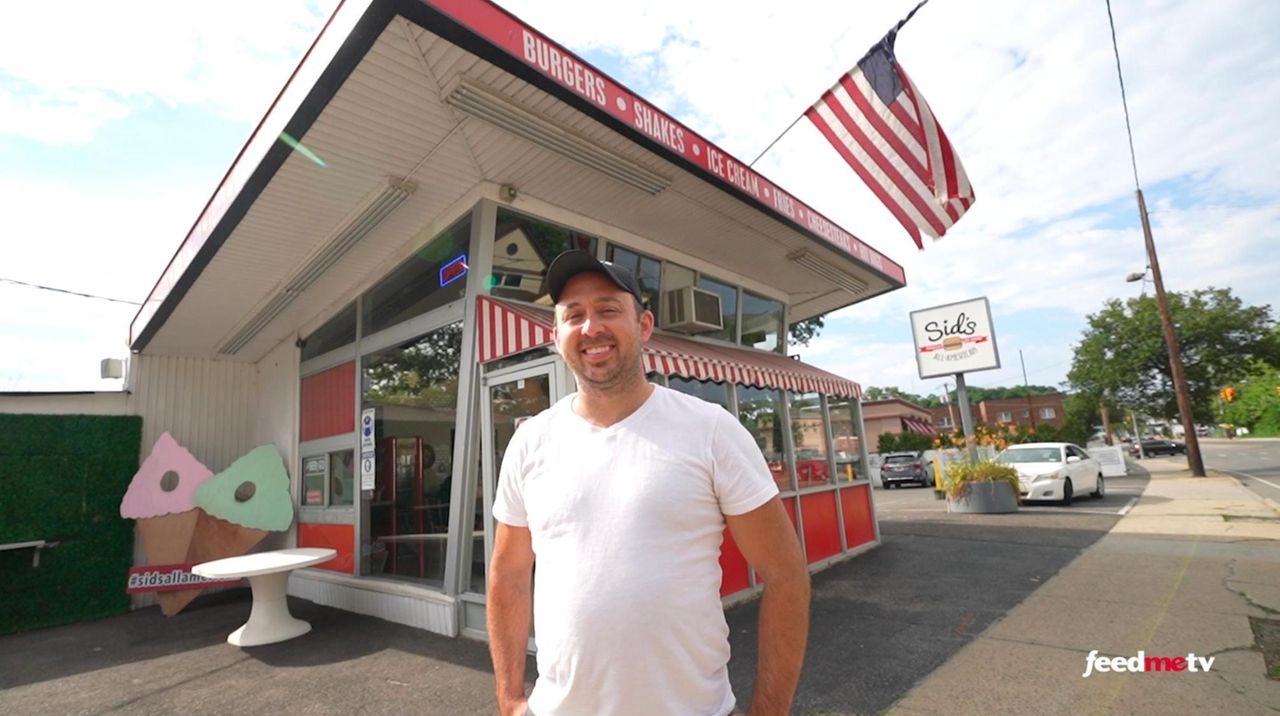 Grandpa's legacy lives on at Glen Cove snack bar Sid's All American owner Ross McCalla talks about his Glen Cove restaurant, which he named after his grandfather. Credit: Randee Daddona

The ice cream now comes from either Sedutto or Schrat’s. Cheesesteaks are made with flavorful sirloin and served on rolls baked down the road at North Shore Farms. The popular fried-chicken sandwich has to compete with the flashier chicken tenders that have been dredged in Frosted Flakes crumbs, deep-fried and served with homemade honey-mustard sauce. And then there are the French fries, hand-cut and fried to order. They are hard to beat served naked or with a dab of ketchup, but Sid’s gilds the lily with Cajun spices, truffle oil, bacon or cheese, homemade chili and cheese, or gravy and cheese.

All of this can be washed down with a hand-spun milkshake, but if you prefer your beverages transparent and in the four to seven percent ABV range, Sid’s also has a great selection of craft beers, particularly from nearby Garvies Point Brewing Co. — Erica Marcus

Special French court OKs most of new law on health pass
3 places to try over-the-top fries this weekend
LI bar requiring workers and customers to be vaccinated
New ramen bar opens in Stony Brook
Masks encouraged in New York, but no city or state mandate
3:07
65-year-old fulfills lifelong dream of opening restaurant
Didn’t find what you were looking for?