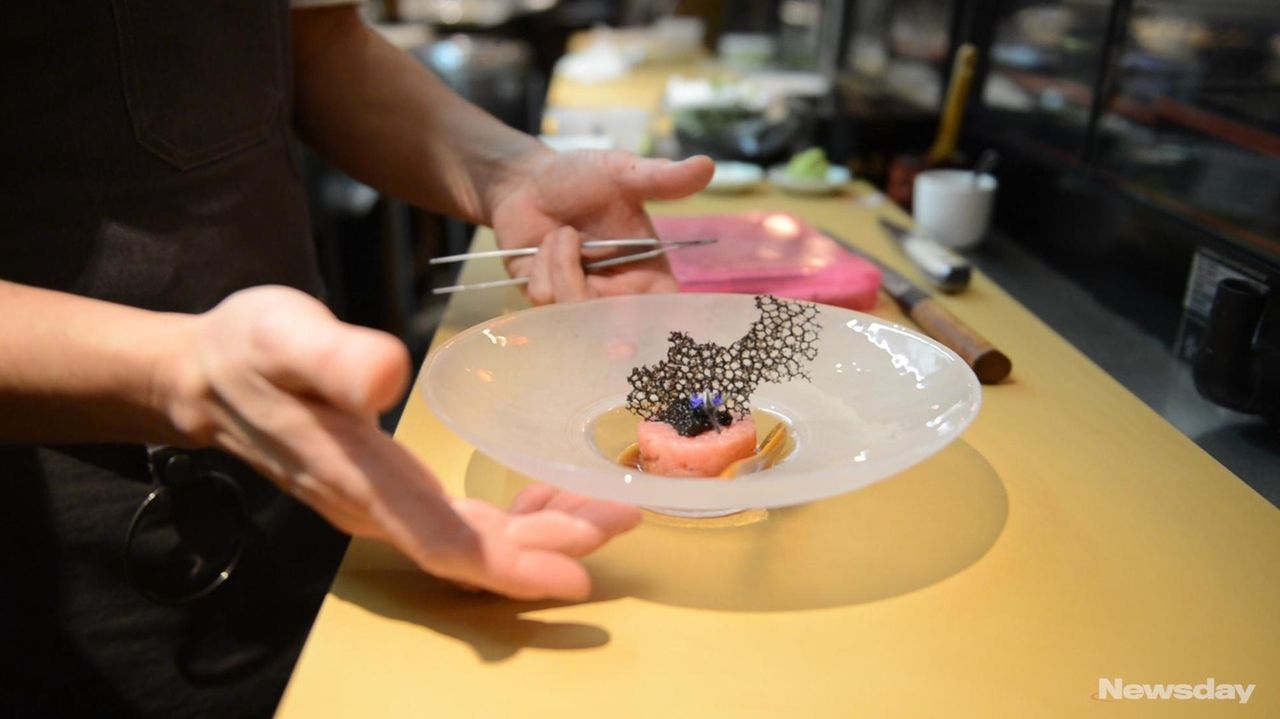 On Friday, Jan. 12, 2018, Lou Joe in Roslyn Heights opened up its doors to show off some of the restaurant's favorite omakase, or tasting menu, specialties. Omakase lets the chef make the customer something not on the menu, creating a unique, exotic dining experience. Credit: Daniel Brennan

In the ex-address of Opera House, an Asian-fusion entry, To Fu, a Chinese mainstay, and the much more memorable Howard Johnson’s, adventures are underway.

Lou Joe refers not to two guys working overtime in the kitchen, but to the city of Liuzhou, in the Guangxi region of China, about 325 miles from Hong Kong.

But Lou Joe in Roslyn Heights is billed as a “modern Japanese & Asian” restaurant. Just as the name is unexpected, so is the ambition of this restaurant, sandwiched between the Northern State Parkway and the Long Island Expressway.

But when chef Sato Cheuk prepares his omakase, or tasting menu, Lou Joe is transformed into a high-voltage showcase seasoned with imagination and delivered with pointillist precision.

In effect, Lou Joe could be two restaurants in one, easily recommended at each level.

Either way, it’s your next destination, from a chef whose résumé includes Yamaguchi in Port Washington and the now-closed Sato in Forest Hills, Queens.

The artful tasting menus are pricey, starting at $80 a person. But first, a look at some of the basic a la carte fare.

While you think about whether to invest in omakase, skip the hot-and-sour soup and General Tso’s chicken to try a recklessly lush starter of seared foie gras, set on a syrupy, rich variation on vinaigrette, an opener that already rouses both curiosity and appetite.

Staying a la carte, nibble on the good, if too familiar, yellowtail jalapeño union. Turn retro with a chicken lettuce wrap that makes the common seem special. Savor the better than usual renditions of shrimp shumai and pork gyoza.

And then ask about the tasting menu. What’s on it will depend on the market’s bounty and chef Sato’s imagination.

One evening, that meant madai, or Japanese sea bream, accented with an herbaceous pesto, set on a crunchy tempura boat that mimics caviar but is made with pearls of tapioca. The result: a delightful interplay of tastes and textures. Fatty tuna arrives looking like a puck of bluefin tartare, topped with sturgeon caviar and enriched, if that’s possible, with squid ink in sauce and a latticework wafer.

A spoonful of delicately spicy salmon at first looks like it’s paired with a quail egg but actually is a mock yolk made of mango, ready to be mixed in, balanced by a shaving of radish. House-made soy sauce and crisped caviar subtly elevate glistening slices of fluke, layered to suggest the shape of a fish. A slate slab is the stage for sheaves of rosy, rib-eye steak crowned with a snowfall of crunchy garlic, accompanied by triangles of gently earthy mushroom. Chef Sato can continue or halt at this point and just leave you very happy.

But what adds to Lou Joe’s appeal is the quality of even the most predictable dishes from the standard menu. The inevitable miso black cod, playfully extreme “signature” sushi rolls, mild Thai-style curry with chicken, sliced duck breast with a “balsamic teriyaki glaze,” and tempura of shrimp and vegetables all perform.

Chilean sea bass, which, of course, is neither Chilean nor a bass, swims in with sufficient opulence to lure you under its official name of Patagonian toothfish. The richness of the buttery, steamed fish, which understandably flakes like a cod, is cut by citrusy yuzu shoyu sauce.

And you definitely shouldn’t overlook the excellent, evocative crisp and shredded Sichuan dried beef, which has just enough heat to make you double down with an opener of cumin-driven, slightly chewy, irregularly cut mouthsful of beef. Anyone needing a quick dose of udon or soba noodles might as well give in, too.

By now, you’ll be more than satisfied, whichever route you’ve taken. Maybe sample the green tea crème brûlée for dessert. Be rebellious and opt for red bean ice cream. Or just linger over a cup of green tea.

And, if you find yourself wanting to return tomorrow, well, that will be no surprise.