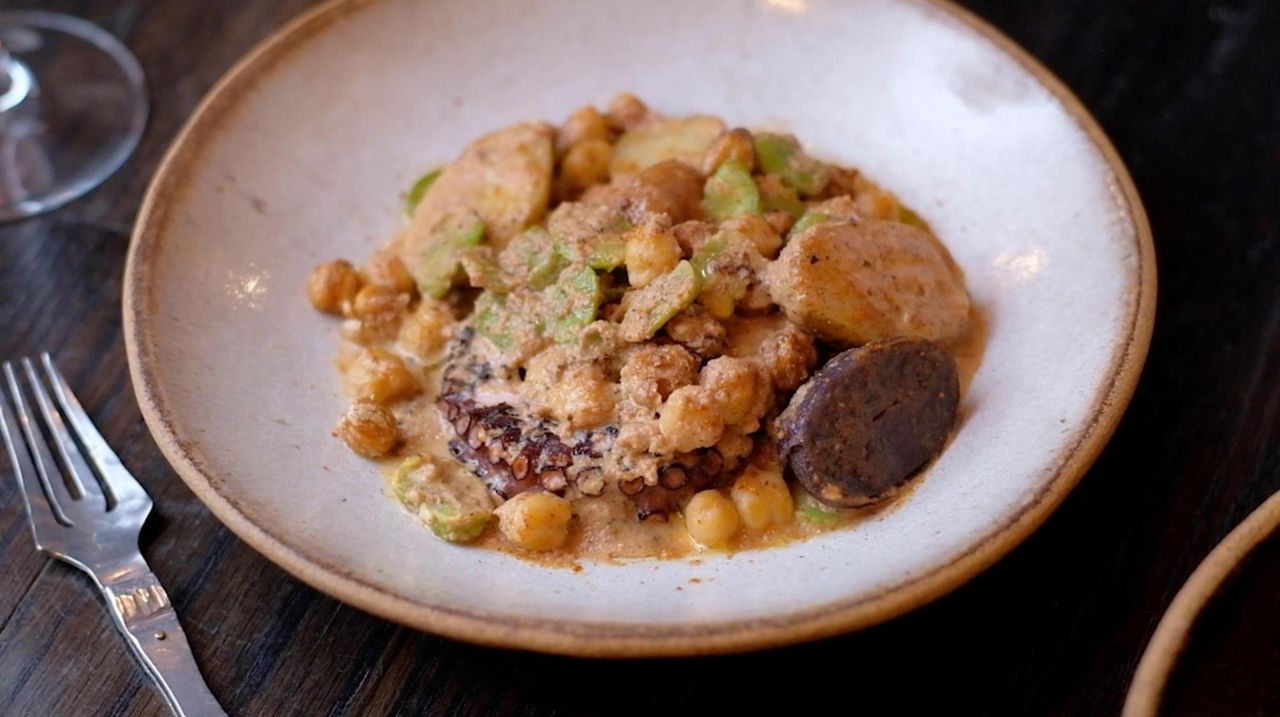 Chef-owner Robert Occhipinti talks about two of the most popular dishes at his Sea Cliff restaurant which combines exuberance with a refined, seasonal sensibility. Credit: Daniel Brennan

Maldon & Mignonette is as much a personal statement as it is a restaurant. Every rough-hewn ceramic plate, every piece of steampunk flatware, every fresh spring pea and shaving of fennel expresses the vision of its chef-owner, Robert Occhipinti.

The well-traveled 29-year-old has cooked in top-notch kitchens in Manhattan, Italy and most recently at Huntington’s late, lamented Jema, where he worked directly under chef Franco Sampogna. At Maldon, he is honoring his former boss’ emphasis on invention and seasonality, but with a lighter hand — unlike at Jema, you can get a salad in the winter.

I’ve visited the Sea Cliff restaurant often since it opened in November, and after some early stumbles, it is on track to be one of Nassau County’s most exciting eateries.

Emblazoned across one wall is the motto “Season with authority,” which gives a clue to the restaurant’s enigmatic name: “Maldon” is an English sea salt and “mignonette” is a blend of peppercorns. This dictum made it all the more maddening when, during early visits, more than a few dishes arrived seemingly never having encountered salt. Misdemeanors such as gluey pasta and overbraised short ribs were raised to felonies when the chef seemed to spend half his time in the dining room serving the food instead of in the kitchen, cooking and tasting it. But based on two visits this spring, the course has been corrected.

While most of the menu changes every three months (this one will be in effect until June 21), one permanent fixture is the bacon and peanut butter appetizer, which sounds like a crazy “Chopped” challenge but really delivers on taste — it turns out the two have a genuine affinity for one another — and texture, as Occhipinti adds crunch with, of all things, toasted red quinoa.

Though the peanut butter was cut with carrot puree, the bacon was one of the only dishes on the menu that didn’t have an essential vegetable element. Baby kale Caesar split the difference between the leaf of the moment and traditional romaine with shards of baked Parmesan doing double duty as both cheese and crouton, and the pungent, anchovy-rich dressing pulling the whole thing together. Burrata, so often a lazy-chef’s gimme, was elevated by a tart garnish of watermelon radish, watercress and shaved asparagus, with crunch, again, supplied by toasted quinoa.

Like burrata, octopus is getting close to being played out on Long Island menus, but Occhipinti gave his well-charred tentacle renewed vigor with an inventive accompaniment of chickpeas (boiled and fried), fresh fava beans and potatoes in a spicy harissa dressing.

During the winter, I struggled with the restaurant’s pastas (all homemade), which sounded great on the menu but landed with a thud on the plate. Still in the clunker division: thick-skinned, stuck-together ravioli whose vernal garnish of fiddlehead ferns and snap peas was undone by a gloppy cream sauce. But the menu now boasts a terrific agnolotti stuffed with mushroom cream and tossed with roasted chanterelles; a hearty cavatelli tightly sauced with guanciale (cured pork jowl), artichokes, asparagus and ricotta salata and an invigorating dose of lemon. I’ve not had better, lighter gnocchi in recent memory — not so much sauced by but integrated with a tangle of dandelion pesto, spring peas and shiitake mushrooms.

That exuberance carried into the entrees with a scallop dish for fennel lovers: darkly seared sea scallops intercut with caramelized wedges of fennel in a puddle of fennel puree and topped gleefully with raw fennel, watercress and frisee. Turns out apricot chutney is just the smear these scallops needed to sing.

Most of the other mains are dutiful variations on the theme of pan-roasted meat, veg and starch on a bed of something tan. A half chicken, weirdly boneless, was perfectly cooked but not served well by a disparate collection of cipollini onions, Swiss chard and grilled king trumpet mushrooms. King salmon — again, perfectly cooked — hardly seemed to be on speaking terms with a sludgy farro risotto and fennel salad.

The strip steak, however, was a triumph. I ordered it medium-rare and looked in vain for a well-done piece to give my friend, the barbarian. No luck. It came with a massive, panko-crusted potato croquette, a big pile of bright green broccolini and an unexpected throwback: a side of Bearnaise sauce.

Occhipinti likes to slice his steaks and chops and fan them prettily on the plate. Pretty, but also conducive to rapid cooling. A few more nits to pick: Such ambitious food needs a bigger, more serious wine list with better selections by the glass. Speaking of glasses, enough with the Mason jars — they sound an especially amateur note next to the carefully sourced plates and flatware. Service, unfailingly friendly, could be more professional.

Quibbles are silenced by Maldon & Mignonette’s signature dessert, the “M&M” — neat little squares of rich chocolate cake surmounted by a thick layer of Valrhona ganache and a happy little cap of torched meringue. The M&M never comes off the menu but I’m still mourning the passing of winter’s “citrus meringue,” a soft ball of lemon curd piped with meringue. Such are the vagaries of a truly seasonal restaurant. There’s always next winter.