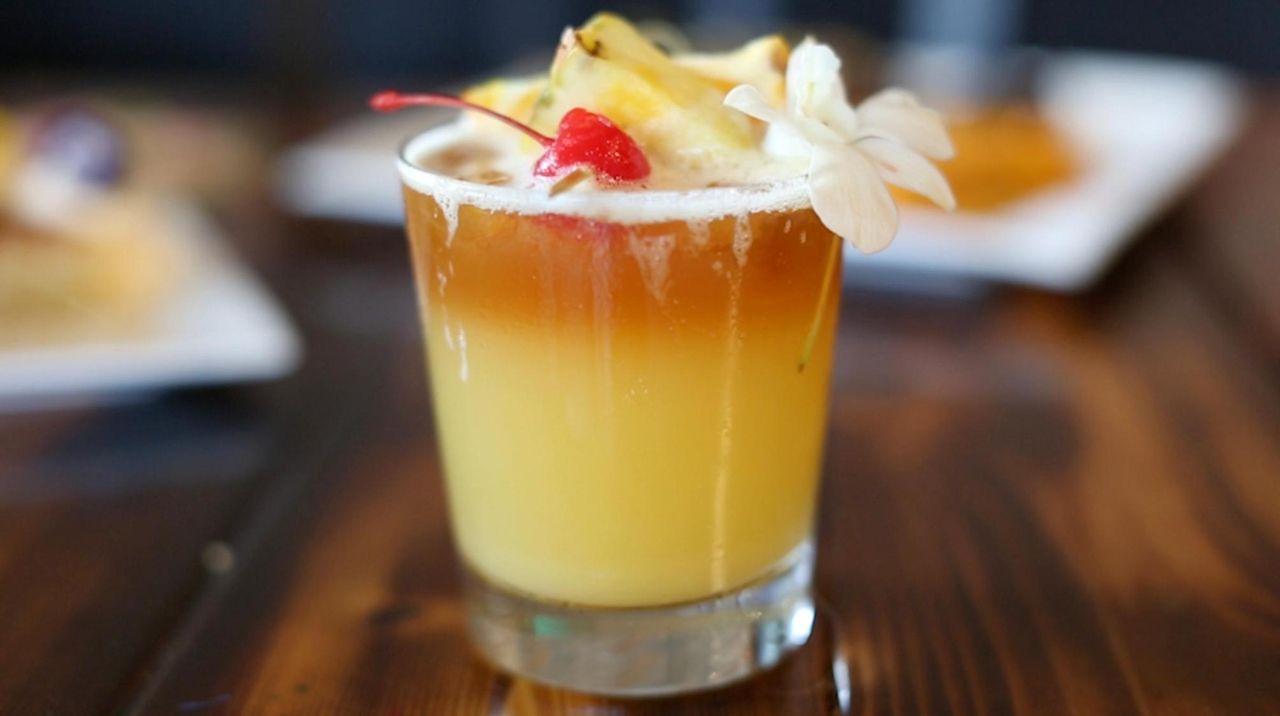 John Louis discussed his family's Hawaiian origins and his Maui Chop House in Rocky Point paying homage to the tropical place, all while making a fruity Mai Thai, the perfect beverage to sip among palm trees. Credit: Yvonne Albinowski

Rocky Point’s Maui Chop House would seem to have a couple of natural audiences: Long Islanders of Hawaiian extraction, and unabashed fans of ersatz aloha, i.e., the spiritual children of Don Ho, “Five-O” and Trader Joe’s. I myself fall somewhere between such extremes, having covered the competitive hula circuit for a Honolulu newspaper in a past life. (Don’t let all those sexy winks and undulations fool you. It’s a surprisingly vicious sport.) Maui Chop House occupies a strange middle ground, too, its menu a bit too halfhearted for kama’ainas, its atmosphere too yawning for the grass-skirt-ukulele-hang-loose set.

Perhaps the space remains haunted by its previous occupant? Memories of BBD’s, Ralph Perrazzo’s zippy burger joint, cling to the walls like tot poppers once adhered to diners’ stomachs, even though the restaurant itself abandoned Rocky Point last December for the glitz and gleam of Vegas.

Still, the restaurant has its moments. Against the backdrop of a rainy spring afternoon on Route 25A, the house mai tai tasted fresh, fruity and better than not a few in the Aloha State itself. Just a few sips into it, a restaurant sandwiched between a Carvel and an urgent care center had somehow morphed into a thatched roof bar with drop-dead views of Kaanapali Beach. A blue Hawaiian I had on a later date accomplished the same effect, even if it did resemble sap from a turquoise-flocked Christmas tree. The same could not be said, sadly, for the Hawaiian orange blossom, which recalled less the pineapple plantations of Maui Gold than the citrus groves of Renuzit.

And while the most exciting thing on Maui Chop House’s menu may be the font (Tiki Magic!), some truly tasty starters can be found here and there. The cleverest of these is the tuna poke nachos, in which generous morsels of ahi drizzled with an uncloying honey-based sauce arrive on a rickety bed of crispy wontons. They are irresistible and not to be confused with the tortilla chip-based kalua pork nachos, which arrive at the table in a gigantic, haphazard pile — the sort of thoughtless thing you might whip up for an emergency Hula Bowl party.

On the other hand, the aloha wings, while offering nothing new in the way of fried chicken parts, at least possess a pleasing combination of crunchy syrupiness, and are brought to the table piping hot. Not so the luau meatballs, which are delivered thickly coated in a brown sriracha-pineapple glaze.

Maui Chop House is the brainchild of owner John Louis,  previously from the Country Corner in Setauket. The new venture is meant as an homage of sorts — Louis’ father’s family left Portugal for Hawaii in the early 20th century — all of which only deepens the mystery of the place’s listlessness toward its own concept. Should an eatery in thrall to the Valley Isle really be piping reggae by 77 Jefferson through its speakers? The fun and fanciful tiki totems on display are just what a place like this needs, so why confine them to a hallway leading to the restrooms? Oh, and on the restaurant’s website, do you really want your starters represented by a photo of shoestring fries, or your entrees by a picture of roast chicken — especially when neither is actually on the menu?

Most of the meat and fish entrees I sampled were marred by a similar inattentiveness, tasting either dry (the sage brown butter pork chop), underseasoned (mahi mahi) or both (salmon), although the shoyu chicken was a notable exception — charred yet juicy, two large thighs well-grilled and attractively priced. To my further surprise, Maui Chop House offers some first-class desserts, notably a fine macadamia nut cream pie. Equally winning is the Kilauea, which despite being named for an active volcano is not, in fact, a lava cake but a flourless chocolate one, and a good one.

Indeed, it’s at the edges of meals that Maui Chop House is enjoying its greatest success at present. The strange middle ground in between, however, deserves further consideration.