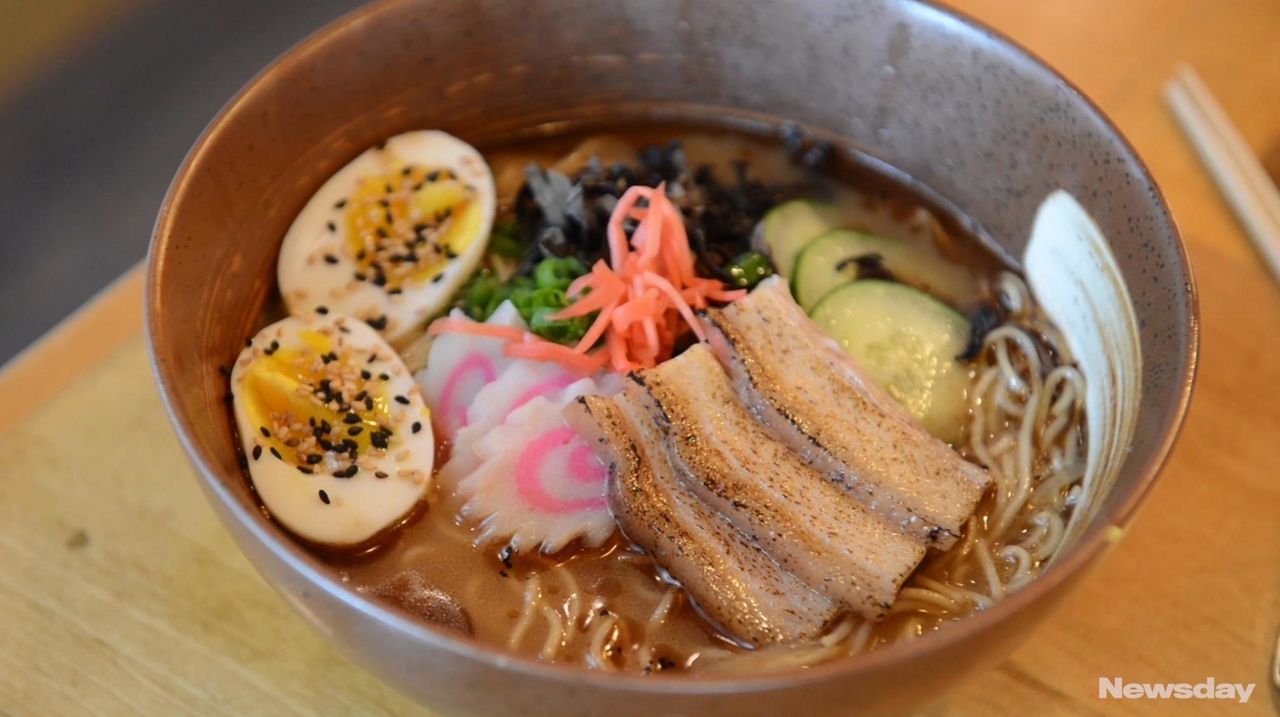 Ramen has an odd way of enchanting fine dining chefs who suddenly find themselves obsessed with mastering the slow-fire complexities that go into building a piping bowl of the Japanese comfort food.

Take celebrity chefs David Chang, Ivan Orkin and, here on Long Island, Marc Bynum. Bynum’s three-year quest to create a local ramen that’s on par with the best slurp shops in the city has resulted in MB Ramen, a fast-moving but inconsistent sideshow that sits a few blocks from his flagship restaurant, Hush Bistro, in Huntington.

The passion project, rooted in the noodle nostalgia of a childhood spent consuming packaged ramen, was born out of jaunts to the city, where cravings turned to research at top-notch ramen shops, including Momofuku Noodle Bar, Ivan Ramen and, his own favorite, Mu Ramen in Queens.

Soon Bynum was simmering 12- to 36-hour broths, experimenting with his own twists — oxtail and beef bones in his pork broth and a salmon bone fumet that bucks the conventional wisdom that you only use the bones of white-fleshed fish in a seafood stock.

Confident in his ramen-making abilities, Bynum went public last winter with a one-day pop-up that morphed into a full-fledged lunch menu at his Hush Bistro in Farmingdale. When Hush packed up and moved to Huntington in the fall, the ramen moved, too, and became a dinner item before graduating in March to MB Ramen in the space that once housed Village Creperie Cafe.

Where Hush is a smooth and polished restaurant that’s in lockstep with Bynum’s fine dining training, MB is raw and fast-paced, a classic ramen counter with a dozen stools perched along the main stage, an L-shaped bar that serves as the only buffer between you and the open kitchen.

To Bynum, noodles are synonymous with hip-hop because when he was a child, grocery store ramen was eaten with friends listening to Jay-Z, The Notorious B.I.G. and Nas. So MB features an industrial chic design that takes its cues from early 1990s New York, particularly the stylings of Wu-Tang Clan. Framed kung fu comic book covers and graffiti art bedeck the walls, including a giant caricature of Bynum himself cradling a bowl of ramen that overlooks the six-table dining room in the back.

If only the food was as well-executed as the concept, Bynum would be a Long Island ramen master in a growing arena where there are few A-list players. The menu is compact: a handful of starters, four styles of ramen and just as many rice bowls that were added to satisfy the gluten-free set.

Outside of the mismatched pickled cucumber salad drowned out by an overpowering red pepper miso sauce, a meal here starts well. You’ll do fine sharing a large bowl of blistered shishito peppers tossed in a light yuzu citrus dressing and charred edamame coated in a mix of smoky Korean spices.

You’ll need a plate of bao buns, especially the ones stuffed with crispy barbecued jackfruit, which tend to run out quickly, and also those filled with wonderfully chewy shrimp cake. And tack on the “sticky icky” wings, which playfully take their name from a potent and gummy style of marijuana popular from Bynum’s youth. There are no medicinal benefits to these hearty thumpers, but they are enjoyably sticky from a sweet and sour Korean barbecue sauce and only enhanced by a cooling ranch and shiso leaf dressing — yet another example of how Bynum takes risks with flavors that yield big rewards.

But you come here for the ramen, and this is where the menu is less reliable. You wish Bynum were there to pay closer attention or, better yet, find a trustworthy steward to ensure quality control.

The MB Ramen, Bynum’s take on velvety tonkotsu broth, is rich, a worthy complement to the well-sourced noodles (no, not all ramen noodles are the same) and draped with melt-on-your-tongue slices of pork belly. But the typically silky shoyu ramen, which here is composed of chicken and duck, lacked the velvety texture one would expect from well-executed poultry broth. It came topped with a chicken confit that was cold and clumpy, a sight that more than one companion likened to cat food.

The fumet miso, an unorthodox ramen, was a pleasant surprise — bold, dark, full of flavor and topped with a decadent seafood trio that included thick cuts of salmon sashimi, salmon roe and dried bonito flakes. The garden ramen, a vegan ramen made of dark roasted vegetables, suffered a similar watery fate as the shoyu but was salvaged by a healthy helping of Bynum’s spicy sauce, a creamy puree of bird’s eye chilies and olive oil.

Rice bowls are best skipped and seem like more of an afterthought to satisfy a certain customer base. Each one we tried featured gluey, mealy, nearly inedible rice.

As a two-time “Chopped” winner and celebrated Long Island chef, Bynum has the skills to fix these problems. With a barbecue project taking up his time, he would do well to make sure that as he grows his empire, he holds himself accountable. He has come too far and served too many satisfying meals not to.

Where to get the best noodle soups on LIMost soups are not a satisfying meal, but add noodles, and it's a different story. 86 Cheap Eats to try on LIThe latest Cheap Eats restaurant reviews.