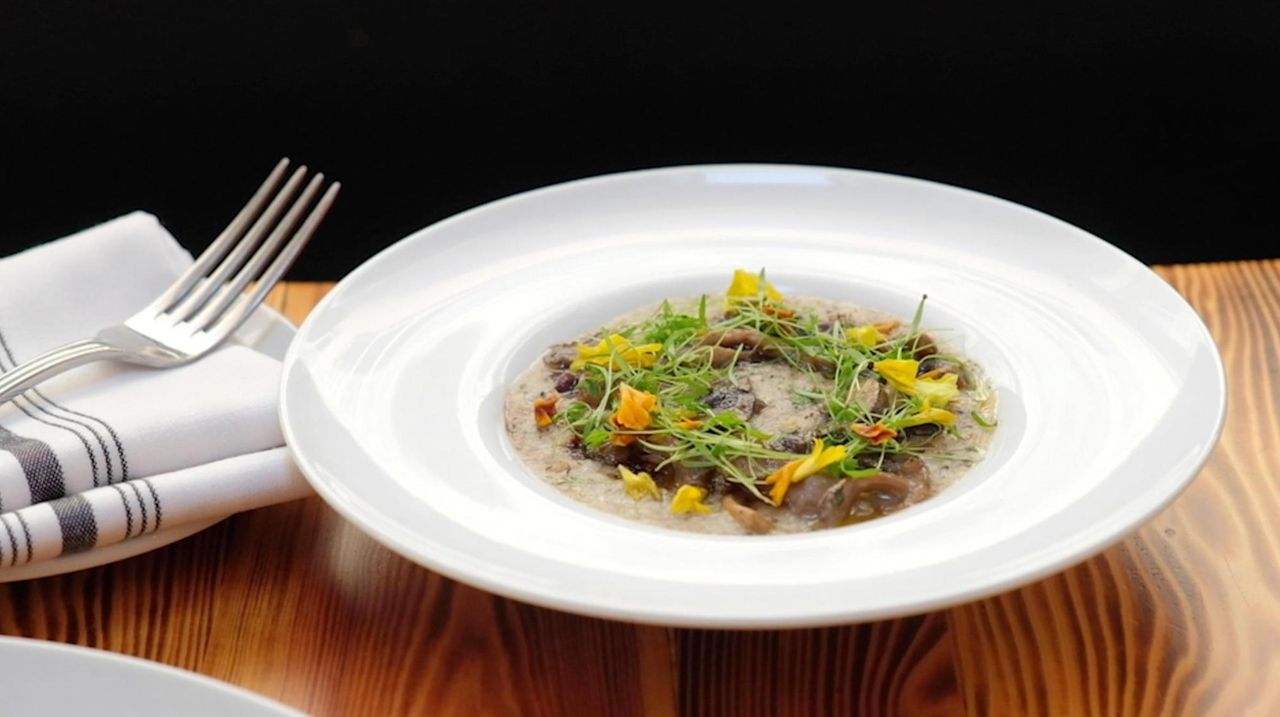 On Dec. 22, Alex Fiorentino, owner of Meritage Wine Bar in Glen Cove, spoke to Newsday about his signature dishes and the expansive wine list at his restaurant.  Credit: Daniel Brennan

SERVICE: They understand the need to try three wines before you commit

AMBIENCE: Minamalist, dim, and sultry, but possibly a touch too dark

“Do you ever get recognized?” When strangers learn you're a food critic, they tend to ask this question (usually followed by, “What’s your favorite restaurant?”).

The answer to the first question: Sometimes. And the second — well, a blank stare, because it’s challenging to choose one. There are charmers at every tier, from steakhouses to taquerias, as well as the places you quietly root for.

So it is with Meritage, an atmospheric wine bar in Glen Cove, which has a brand-new executive chef, B. Julius Miranda. Miranda is the third to take the reins at Meritage since it opened two years ago, and he and owner Alex Fiorentino share a backstory: The two worked together inside Revel, the mega Atlantic City casino (now called Ocean Casino Resort), before heading in separate directions. For Miranda, that included stints at restaurants and resorts in Las Vegas, Newport, Rhode Island and his native southern California before landing in Glen Cove, longtime land of Italian eats.

Like that cuisine, Meritage invokes the thoughtful pairing of food and wine, but from a broader Mediterranean perch, lassoing Spanish, Italian, Greek and French influences. Wine-wise, the by-the-glass list runs to 25 wines or more, drawn from across the world. To work through a few inside Meritage’s atmospheric dining room — blanc de blancs from California, xinomavro from Greece, Spanish Rioja — feels like a micro-adventure.

Meritage is also intimate enough, with a bar to one side and a dusky, candlelit dining room on the other, that I was recognized. About a third of the way through the meal, an unbidden plate of gnocchi arrived, veiled in short-rib ragu, baby carrots jutting from its top. “Complements of the chef,” our server said.

“I think they know you,” I whispered to my colleague, Scott Vogel, also a food critic and burgeoning video star. “No, I think it’s you,” he countered.

In the era of social media and video, it happens. I had been silly not to order this straight away: The gnocchi was the equivalent of a food Snuggie, a comforting fusion of handhewn pasta and silken beef. We wiped the plate clean.

Even when you are “made,” a restaurant can't change its stripes on the spot. As it did when it opened, Meritage shows respect for ingredients at every turn: The excellent crusty Italian bread from St. Rocco’s bakery; the looker of a charcuterie board, with curls of Mangalica pork, cornichons and confoundingly fresh walnuts; oysters (Bluepoints repping the East Coast, Hood Canals the West) that had practically bounced straight out of the water. We housed a bocadillo, a petite sandwich of flaps of molten pork belly wedged into a baguette with a grippy sesame aioli. And where else around here are you going to encounter a crispy fillet of yellow perch, draped with minced tomatoes? Gone in a flash, too.

Cooking in resort settings, Miranda no doubt honed the skill to make people feel indulged via technique rather than sticker shock. He puts that into practice in Meritage, from an earthy mop of black truffles over risotto to a plate of patatas bravas, paprika-ed-up fried potatoes, with a luxurious crown of aioli. A salad of shaved Brussels sprouts salad, dressed in a punchy shallot vinaigrette and shaved Parmesan, tasted virtuous and sinful at the same time. Housemade pappardelle tumbled with butternut squash, crispy sage and a sheen of brown butter — well, I almost wanted to wear it out the door and into the cold. Most of these plates cost between $12 and $14.

It wasn’t all wine and roses: A vibrantly seasoned paella, which looked like a freeze-frame explosion of prawns, mussels and calamari, nevertheless suffered from dried-out rice and clam bodies fused to their shells. The skin of a roasted chicken was coppery goodness, but the meat underneath overcooked; a Berkshire pork chop, too, was slightly parched. It's not lost on me that the latter two are more conservative dishes; for a West Coast-shaped chef who likes to run fried perch and empanadas and bao (Chinese-style buns) as specials, a touch of subversion may be the thing that keeps Meritage as vital a place as we have.