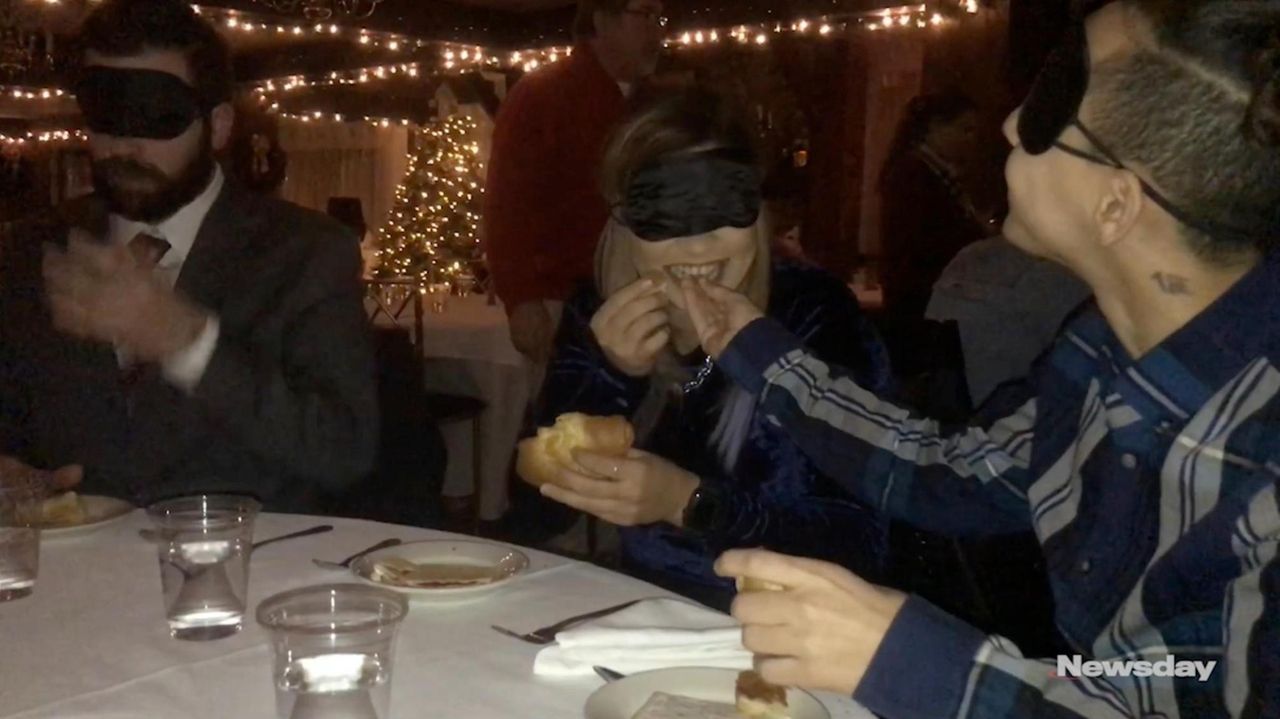 Inspired by the Netflix thriller, “Bird Box,” The Milleridge Inn in Jericho on Friday hosted a dinner in which patrons ate blindfolded and in silence. Credit: Newsday / David J. Criblez

The new Netflix thriller “Bird Box” inspired the Milleridge Inn in Jericho to serve a dinner that was outside the box. Coinciding with the theme of the post-apocalyptic movie, in which the eyes must be hidden in order to survive, guests dined blindfolded through a nine-course mystery menu on Friday night.

“I’m not going to tell you what you are getting or give you choices. If you don’t like it, just push it aside and wait for the next course,” general manager Terry Wilson said in announcing the evening's parameters to the 20 patrons gathered for the first seating.

Bird cages hung from the ceiling, newspaper was taped over the windows and blindfolds were distributed. Then guests in groups of two or three followed a string through the parlor to arrive at their table, much like Bullock does in the film while working her way through the woods.

“This is something different and interesting,” said Kate Maciejka, 49, of Oyster Bay with her daughter Layla, 12. “I like the element of surprise.”

When the first course arrives, it's a direct play off the movie. Vickiann Vachula, 47, of Ronkonkoma is reluctant to take a taste, as she’s a self-proclaimed picky eater. “I don’t want to eat monkey brains or something,” she says.

By the next course, Jessica Navarro, 26, of Central Islip sniffed her plate, trying to figure out what the waiter put in front of her. “Smells like beef stew,” she said, moving her fork around the plate. “Hey, where’d my potato go?”

After dinner, guests, eyes still covered, followed the sound of chimes out of the dining room. Then it was off to the bar, sans blindfolds, for a complimentary after-dinner drink to discuss their experience.

“I was more nervous than I thought I was going to be,” said Teresa Eagle of Garden City. “The hardest part was trying not to spill anything on yourself.”

Her husband, Steven, added, “I had a great time. I think they put a lot of thought and effort into this. They took a lot of aspects from the movie.”

Milleridge owner Butch Yamali said he's planning more installments of the event, which costs $47.95 a person. There were plenty of logistics to consider in the planning — including avoiding food with bones and not serving any hot beverages, he said.

“It was delicious, but I was a little disappointed Sandra Bullock wasn’t here," said John Scelzi, 33, of Ronkonkoma. "I know she’s got bigger things to do.”