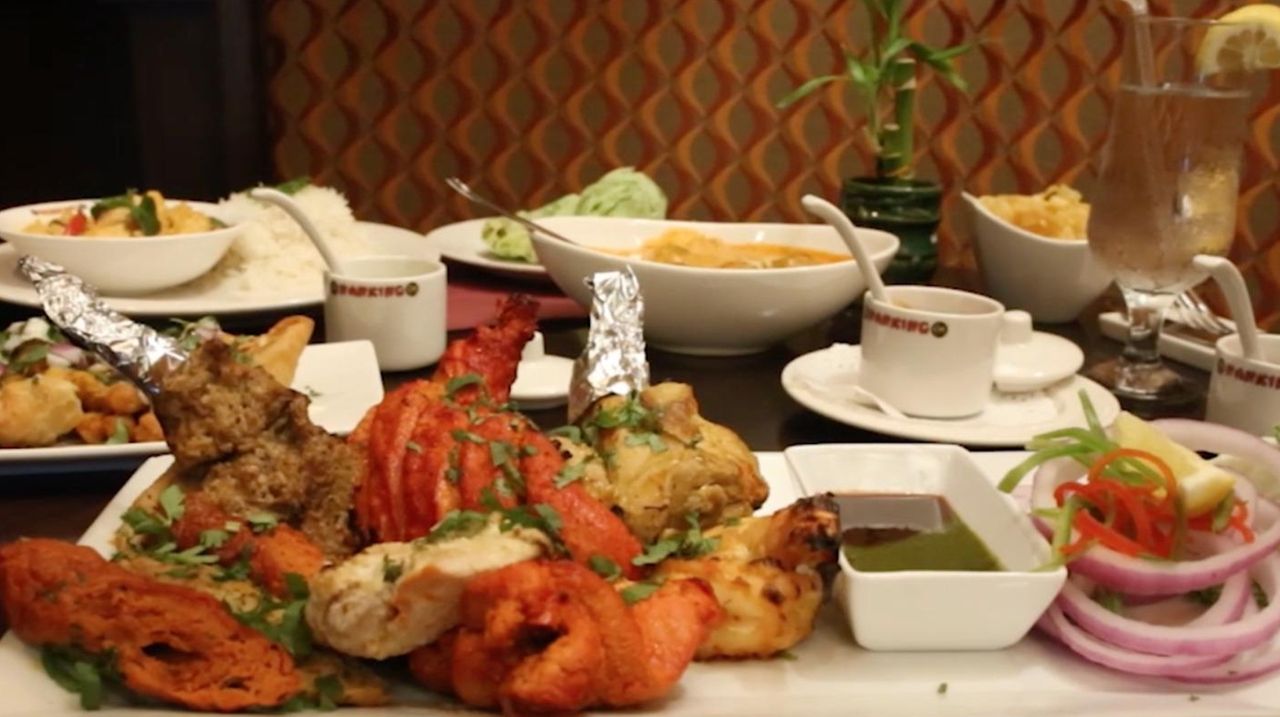 Nanking restaurant in the Hilton Long Island in Melville, serves Indian, Chinese and Thai and Asian-fusion. Partner Harkesh Yadav talked on June 24, 2017, about his goal of serving traditional foods with seasonings and spices that immigrants might find back home. Credit: Yvonne Albinowski

Nanking has checked into the Hilton on Route 110 in Melville along with four cuisines in tow.

Yes, here’s a hotel restaurant where your choices include Indian, Chinese, Thai and Asian-fusion. Find another dining room for that chicken Caesar salad or club sandwich with extra bacon.

This is the fourth Nanking. There’s one in New Hyde Park, another in South Ozone Park, Queens, the last in Plainfield, New Jersey.

At the Hilton Long Island Melville address, more than a few places to eat have opened and closed over the decades. The most notable was the first, when the Royce Carlin Hotel opened here in 1988. The main dining room was the province of Edouard’s, a high-end, formal, two-star continental.

Things definitely have loosened up, thanks to owner Harkesh Yadav and manager Rupesh Kumar.

Except for its Vegas-style entry off the lobby, the décor is pretty streamlined, with a fondness for red. Some tables will offer exceptional seats to follow the procession of wedding parties gliding through on summer weekends.

Arrive on the early side, however, and you may have the whole restaurant to yourself. But service will be friendly and understanding even if you walk in with the whole soccer team in full voice.

Indian selections dominate the menu and are among the better choices. Nanking is good, sometimes more. Just be mindful what you order.

Samosa chaat is among the winners, savory pyramids of pastry filled with lightly and mildly spiced potatoes, peas, cashews and raisins, capped with a chickpea-fueled sauce. Also recommended, malai kofta, appetizing cheese-and-potato dumplings. Keep vegetarian with the tasty, stir-fried cauliflower, even if the chili sauce doesn’t deliver the advertised heat.

One theme played over and over here is restraint. If you want the dish designated spicy to be exactly that, you’ll have to say it early and often. Order Sichuan shrimp and you might conclude that the fiery, southwest China province was annexed by timid invaders.

Veer Thai with the refreshing raw papaya salad, sparked by chopped basil, peanuts, chilies and tamarind sauce. But you can skip the chicken satay, which charitably may be described as dry. The chicken panang curry, enriched with coconut milk, stands out from the Thai side.

Nanking prepares a workmanlike lettuce wrap that you’ll pack with modestly seasoned chicken; and respectable steamed dumplings, with either vegetables, chicken or shrimp, in soy-garlic sauce.

The house’s tandoori mixed grill is highlighted by the familiar, slightly reddened chicken and chicken kebabs. Cross borders and pair it with the satisfactory pad thai noodles with vegetables.

Crisp, whole red snapper is available with five different sauces. Stick with ginger. Lobster Hong Kong-style is tail meat out of the shell, finished with cashews and peppers. It contains the excitement.

Seasoning improves with the tangy lamb vindaloo, but the lamb itself, while submerged in sauce, still shows up overcooked and tough. Avoid the watery dal tadka, or yellow lentils, and consider the vegetable biryani instead.

Whatever your preference in the Asian-fusion realm, try the Indian breads, from the garlic naan to the onion kulcha. They’re all pleasing.

For dessert, the Indian options are best. They include malai kheer, a cousin of rice pudding cooked with caramelized pistachios and milk; rasmalai, the sweet, cheese dumplings, accented with cardamom and saffron; and gulab jamun, a warm, traditional treat heady with honey.