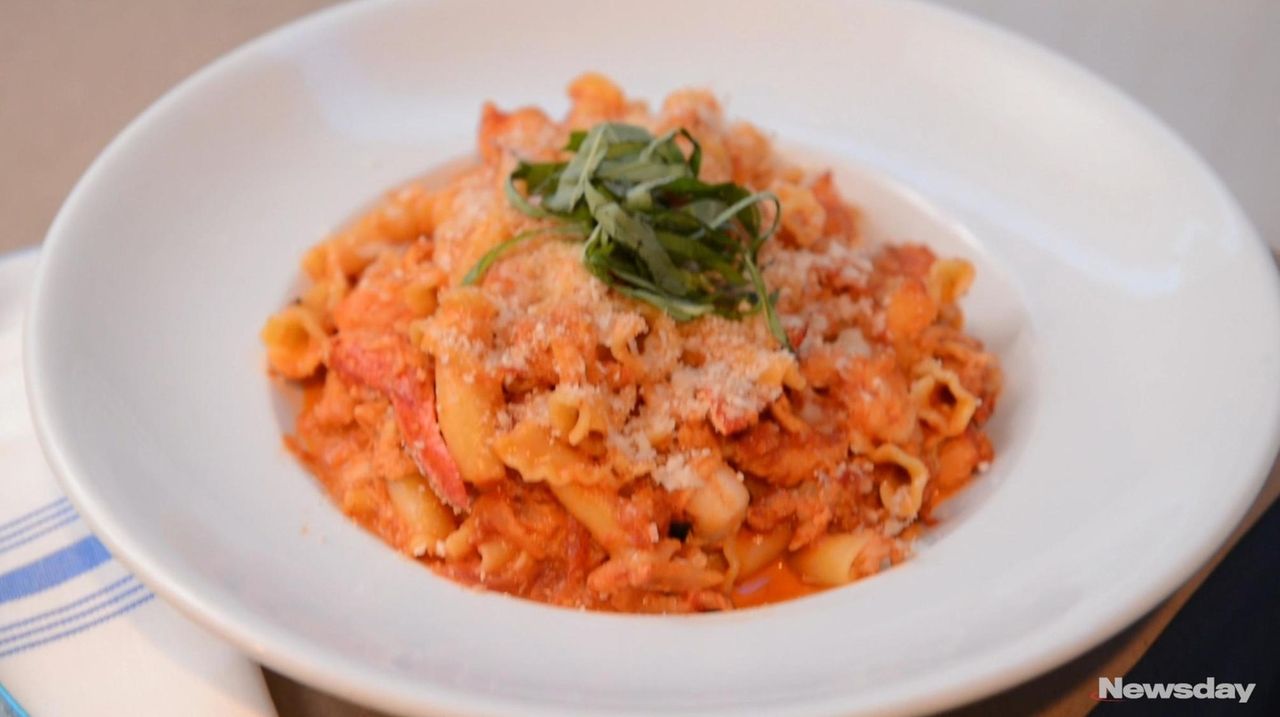 Nantuckets is a seafood-American restaurant located in downtown Port Jefferson, with outdoor dining and an amiable atmosphere.  Chef Tara Weaver walks viewers through one of her specialty dishes: seafood Bolognese. Credit: Daniel Brennan

Nantuckets, as in Martha’s Vineyards, encounters choppy waters by invoking the isle off Cape Cod.

Although the stylized metallic sea horses that decorate the dining room are striking and the food that’s served there has some seaside appeal, you’ll still feel a lot more than 240 miles away.

Nantuckets, complete with a whale tail for the first “T,” is an amiable, if misnamed newcomer, even when the crowded perch is noisier than a ship’s broken horn.

The deck still brings you summery breezes, painterly skies circa sunset, and the occasional sound of live music. But owners Stacy and Richard Gertz have additional rebranding to do. A more consistent kitchen would be a start.

Cornmeal-crusted fried oysters deliver more crust than oyster. Steak tidbits, the title given irregularly cut nuggets of a drawn-and-quartered filet mignon, drops the beef on ciabatta toast that already has been slathered with dull horseradish cream to compound the problem.

Skip the pasty, underseasoned New England-style clam “chowduh” and “lawbstah chowduh,” which bury the flavor of the shellfish. These two need more than Westminster oyster crackers.

Though generous with shrimp and squid, plus fried zucchini, the fritto misto shows up crunch-free and limp, with a peel-away coating.

Your meal improves with the tasty, glistening tuna poke, a layered construct accented with cabbage slaw, guacamole and a bit of sesame-cashew crispiness. The beach house salad, highlighted by beets, orange and goat cheese, also brightens the appetizer selections.

Likewise, crisp spring rolls that are filled with mushrooms, kale, corn, butternut squash and Vermont white Cheddar. But they could use a jolt from the advertised Sriracha that prefaces “sweet chili sauce.”

Nantuckets earns its star with the main courses. For a seafood-oriented spot, it’s ironic that the best dish is a thick, juicy Berkshire pork chop, boosted by roasted poblano creamed corn, a smoked Gouda-and-potato croquette, and a comparatively restrained apricot glaze.

A pleasing surprise: the seafood Bolognese. Here’s a savory affair, even if it has as much to do with Emilia-Romagna as the restaurant does with its namesake. It succeeds with chopped shrimp, crabmeat and lobster in a creamy tomato sauce that enfolds the bell-like, ruffled-edge campanelle pasta.

Marinated, grilled swordfish, moored on a combo of quinoa and kale, leads the school of fish. Nut-crusted halibut is slightly overdone, set on a union of French lentils and rainbow chard. Roasted Scottish salmon is enriched with a leek, lobster and mushroom ragout, and a puree of peas.

Desserts are as uneven as the Nantucket coast.

“Key lime pie in a Mason jar” sounds like something on loan from the Museum of Contemporary Art North Miami. But it’s tangy. The rice pudding “trifle,” with raisins, cranberries and whipped cream, becomes a double entendre.

Chocolate molten lava cake by now should have experienced its final eruption. This rendition may do it. And the cappuccino crème brûlée materializes with a semisoft caramelized sugar top that can be removed in its entirety with a flip of the fork.

But, to paraphrase Herman Melville, the author whose great work visits Nantucket, “Call me skeptical.”