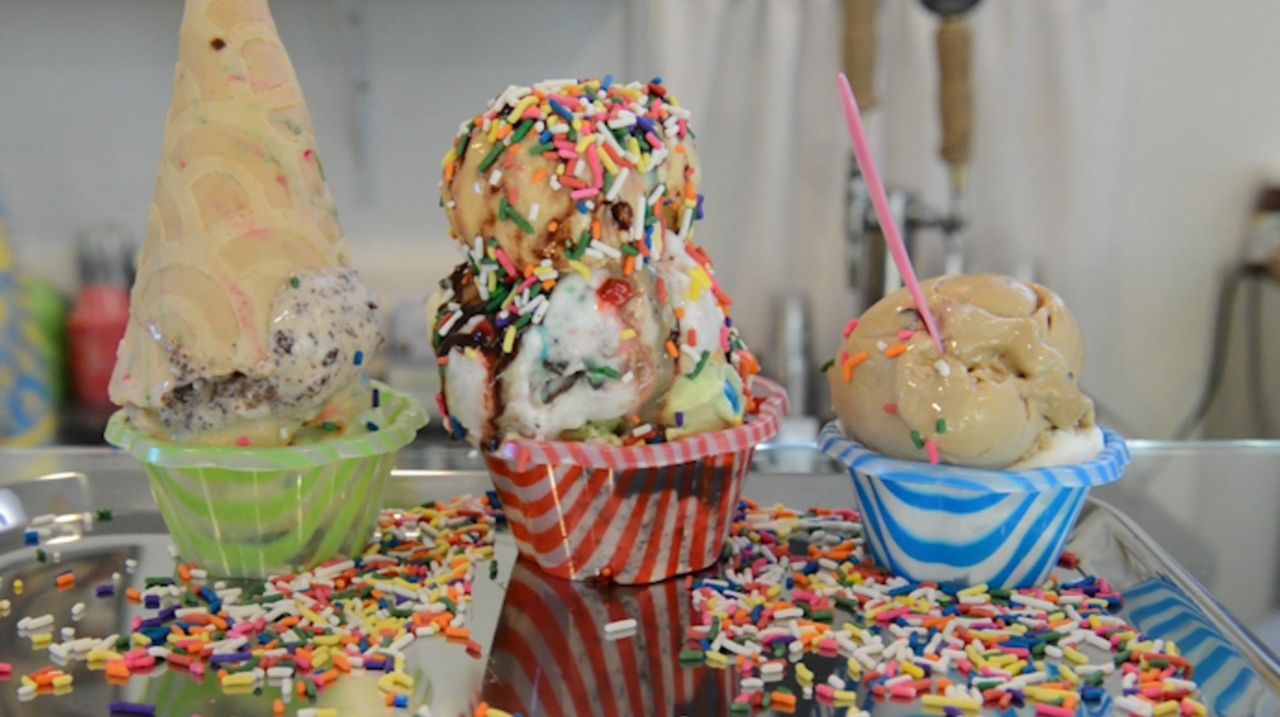 Summer's here, when the ice cream eating begins in earnest. On Long Island, you're never far from a great ice cream parlor. We got the scoop on what's new at Gemelli Gelato in Hampton Bays. Credit: Daniel Brennan

Summer’s here and the ice cream eating begins in earnest. Whether you need a small cone to make your evening stroll more palatable, or you’re looking to hunker down for some serious sundae action, you’re never far from a great ice cream parlor on Long Island. (Click here for our list of more than two dozen shops that make their own.) Rest assured that we here at Newsday are vigilant about keeping on top of the ice cream scene. Here are the newest developments for summer.

This corner of Willis Avenue has been dispensing homemade gelato since 2005, but in February, the store got a new name and a spiffy makeover. Allen Aingorn had been a partner in the store’s former incarnation, Baci Gelato, but as of February he’s sole owner of dei Coltelli.

The name (pronounced “day coal-TELL-ee”) honors Francesco Procopio dei Coltelli, the Sicilian chef who first popularized Italian ice cream at his Café Procope, founded in Paris in 1686. Long Islander Aingorn fell for gelato when, in his early 20s, he was playing professional soccer in Italy and, in his off hours, would hang out at his team owner’s gelateria. At dei Coltelli, virtually all the ingredients (except for fresh fruit) are imported from Italy. Pistachio, made with Sicilian nuts, is particularly fine. Other popular flavors are bacio (chocolate-hazelnut), stracciatella (cream-flavored ice cream laced with dark chocolate) and salted caramel. Dei Coltelli also makes elegant gelato cakes and gelato pops.

Wading River’s shopping destination, The Shoppes at East Wind, had a soft opening last fall, but this summer, almost every establishment in the quaint retail “village” is open for business — including Tweets Ice Cream Café.

The shop is owned by Tracie and Lou Ambrosio and Kenn Barra. (Lou Ambrosio is general manager of The Inn at Wading River; Barra owns the whole shebang.) The menu here goes for mass appeal, with hard and soft serve ice cream and nonfat yogurt. Get a cone or a cup (brown or strawberry “bonnet” optional), a shake, float or sundae. Tweets makes its own waffle bowls, jumbo chocolate chip-wiches and flying saucers (ice cream sandwiched between chocolate wafers). Baked goods from the inn are also on offer, as well as Starbucks coffee.

Set back from Montauk Highway on a gentle slope, Gemelli Gelato is one of the Island’s prettiest spots for enjoying ice cream. Sit at a picnic table while the kids run around (and drip) on the expansive lawn. The shop’s been open for a few years, but this year it’s been taken over by Anthony DePaola and Charlie Ferrante, whose company Gelato Kings supplies local restaurants and caters events with a mobile gelato cart. (Gelato Kings had been one of Gemelli’s suppliers.)

DePaola and Ferrante bring a youthful verve to the centuries-old art of gelato, creating flavors such as passion fruit, rainbow cookie, apple pie and white chocolate with raspberries. The “chocolate elephant” features smooth peanut butter gelato studded with chopped brownies and pieces of chocolate. Even the cones are inventive: In addition to wafer, sugar and waffle, Gemelli stocks red velvet cones and birthday cake cones.

Gooseberry Grove has moved its homemade ice cream four miles north. The ice cream parlor was a fixture in Oyster Bay since 2004, but after owner Bob Liebold lost his lease earlier this year, he decamped to Bayville.

Liebold, who has a thriving wholesale business, installed his equipment in a commercial kitchen, but he missed having a retail outlet. Oak Neck Deli was happy to oblige and now you can supplement your sandwich with a scoop or shake or sundae. (Liebold hopes to open his own Bayville location later this year.)