There’s no doubt that COVID-19 has taken an unprecedented toll on the hospitality industry; the last eight months have seen dozens of businesses close, and many more carry on despite dwindling profits and an uncertain future.

But, like desert flowers that bloom in the least hospitable environment, new restaurants have been popping up all over Long Island since the pandemic began. Here’s an overview of some of the most noteworthy.

Among the biggest-ticket openings is Steven Del Lima’s Hooks & Chops ($$$-$$$$), whose modern woodwork, pressed-tin ceilings and sleek banquettes vanquish any memories of the Ruby Tuesday that once occupied this spot in Commack. As the name implies, Hooks & Chops aims to please both piscovores and carnivores, with crispy, whole red snapper, cedar-planked halibut and peanut-crusted ahi-tuna for the former; dry-aged porterhouse, maple-brined tomahawk Duroc pork chop and chili-glazed Hudson Valley duck breast for the latter.

After a test run as a pop-up in Greenlawn, Ella’s ($$-$$$) has settled into the old Swallow space next to the Paramount in Huntington. This latest venture from David Tunney (Old Fields in Greenlawn, Old Fields Barbecue in Huntington and Setauket) ups the green ante on reclaimed wood by lining the walls with unfinished particleboard. The kitchen, dominated by a gas-assisted wood oven, is helmed by Koji Kakimoto whose menu features imaginative pizzas and a global range of small plates such as maple-glazed carrots and crisped prosciutto, baby octopus over white-bean purée, meaty fried oyster mushrooms, corn-ricotta agnolotti in a sage-brown-butter sauce.

At the other end of the dining spectrum, the taco craze shows no sign of abating. Not only has Dirty Taco added Woodbury to its outposts in Wantagh and Rockville Centre, but new taco operators are rife. Tommy Taco ($-$$) has set up shop in a Huntington shopping center a few doors down from the Department of Motor Vehicles. Tom Stein, a restaurant veteran who did time at TAO in Manhattan, and his wife, Elisa, wanted to open "a cool, fun taco spot where you could get a restaurant-quality taco without having to break the bank." You’ll find tacos, both traditional and creative, rice bowls, churro funnel cakes and sculptural, masa-battered fried corn fritters served with a chile-queso dip. Or, satisfy your jones for birria tacos at Taco Island ($-$$) in Mount Sinai. The specialty of the Mexican state of Jalisco entails braised beef into which you dip fried tortillas.

Classic Mexican tacos — among them, lengua (tongue), cabeza (cow’s head) and cecina (salted beef) — are a draw at Taqueria El Sabor Poblano ($-$$) in Hicksville. But don’t let them dissuade you from the sandwiches, especially the cemitas, heroic assemblages of meat that shares a griddled sesame-seed bun with refried beans, fresh avocado and a mountain of finely shredded Oaxaca cheese. Weekend specials include chef-owner Maria Gutierrez’s lamb barbacoa and chicken mole poblano.

And, this being Long Island, tacos take on an Italian flavor at Tony’s Tacos ($-$$), owned by Mike Scotto, former executive chef of Umberto’s. His Floral Park shop makes the case for such cross-cultural dishes as chicken Parm tacos, tortilla chips with guacamole and burrata, and pizza toppings on an open-faced tortilla.

Not that there’s been any letup in LI’s enthusiasm for straight-up Italian. In September, Smithtown welcomed Osteria Umbra ($$$-$$$$), the ambitious new restaurant from Marco Pellegrini, who presided over the kitchen at the three-star Caci North Fork in Southold. The décor of modern Italianate bling here is anchored by a massive wood-fired grill-rotisserie, where slowly revolving birds and beasts lend their drippings to waiting pans of vegetables directly below. Most of Pellegrini’s greatest hits from Caci are back for an encore, from skewers of breadcrumb-crusted calamari to the massive wood-grilled veal chop. Making their debut in Smithtown are whole roasted suckling pig and rotisserie duck leg with pork belly. 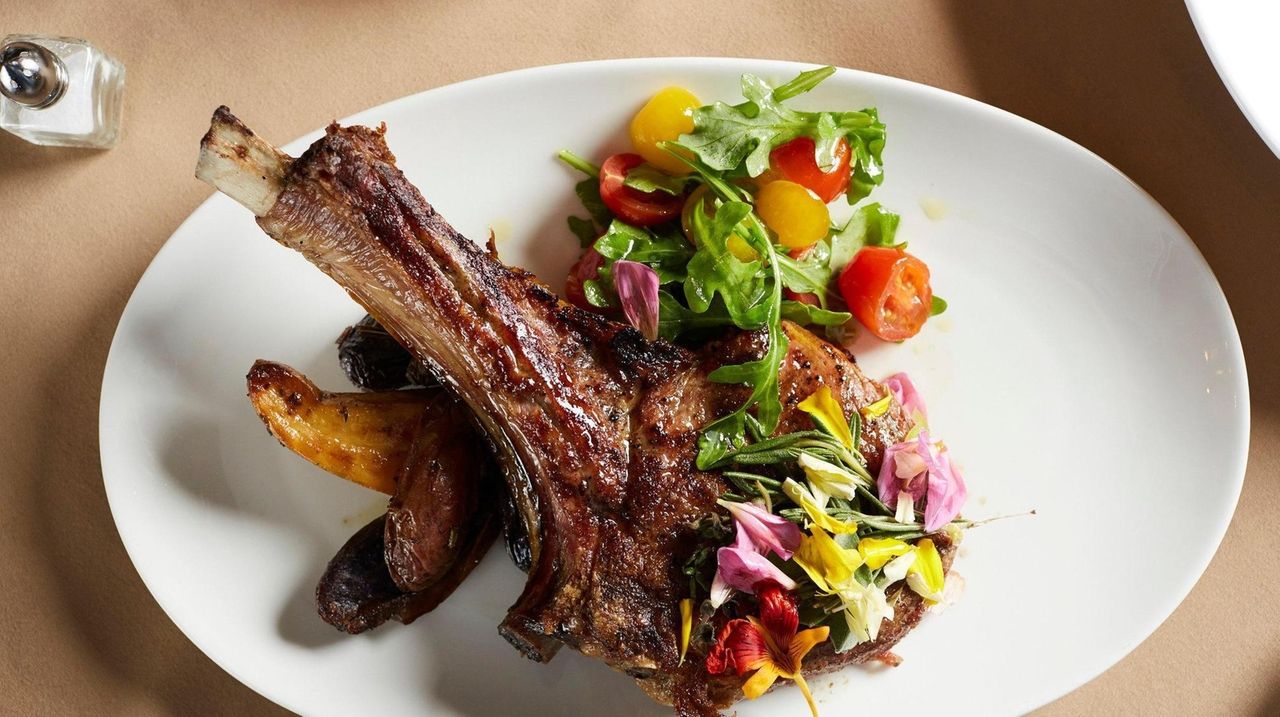 He dreamed of opening an Italian restaurant on LI, then the pandemic hit A wood-fired grill-rotisserie was one of the many things Marco Pellegrini wanted in his restaurant and he wasn't going to let the pandemic stop him from acquiring it.  Credit: Yvonne Albinowski

Pizza gets its due at two other significant Italian openings: In Rockville Centre, Maurizio Vendittelli, a partner in The Breakfast Club across the street and Churchill’s next door, transformed Winston’s Kitchen & Bar into Mangia Bene ($$-$$$), rustic Italian trattoria whose oven produces a fine Calabrese pie (with crumbled sausage and Calabrese chilies) among others. Chef John Di Lemme is also a pasta savant, making an eggy, creamless bucatini carbonara and an authentic Genovese strozzapreti bathed in a verdant pesto along with cubes of potato and lengths of green beans. The menu smartly splits the difference between the Italian food you find in Italy, and the Italian food you find on Long Island.

About 23 miles due east, Molto Pizza ($$-$$$) in Babylon is the latest eatery from Massimiliano Gargiulo, owner of the wine bar Molto Vino. Many of the dishes reflect the cuisine of the coastline of Campania — both Gargiulo and executive chef Mario Passante are from Capri, the island just off the Sorrento Peninsula. There’s eggplant Parmesan done the Neapolitan way (baked, with no breading, with cheese and tomatoes), pennette "Aum Aum" with eggplant, smoked buffalo mozzarella and San Marzano tomatoes and scialatelli alla Nerano (handmade spaghetti with zucchini and melted Provolone del Monaco). For dessert: the great torta Caprese (a flourless chocolate-walnut tart).

While enthusiasm for Asian fusion seems to be waning, Asian noodles are coming on strong. Ramen continues its march across the Island, with Ichiddo Ramen ($-$$), a Minnesota-based chain, landing in Port Washington and Kiko Ramen ($-$$) taking over Gaetano’s Flour & Fire in Garden City. Kiko is owned by Kenny Li, who also owns Iron Poke and Iron Ramen, both in Stony Brook. And there’s a new noodle in town: pho, a Vietnamese dish of broth (usually made from beef bones) filled with rice noodles and garnished with a riot of fresh herbs.

Find pho (pronounced "fuh," not "foe") at Kenko ($-$$) in Merrick and Pho 34 ($-$$) in Levittown, alongside other Vietnamese dishes such as banh mi (baguette sandwiches that bear witness to the country’s French colonial history), summer rolls (cold rice-paper packets filled with meats or vegetables) and grilled meats served over rice or rice noodles.

I wouldn’t have pegged Bethpage as the location for two newsworthy openings, but such is the topsy-turvy world we now inhabit. The oft-churned location on Hempstead Turnpike that had a long run as Townhouse Diner and then a series of short-lived successors has finally eschewed the diner moniker and menu, emerging as Bethpage Burger Bar ($$). It offers an of-the-moment roster of burgers, lobster rolls and over-the-top shakes, many featuring LI’s own Chonky Cookies. Downtown Bethpage now has a contender in Me & You ($$-$$$). Fay Arolithianakis, former executive chef at Mill River Club in Oyster Bay and a longtime Bethpage resident, partnered with chef Jose Alvarenga, to finally "do something for myself and do something for Bethpage." Her menu is a crowd-pleasing combination of classics, old and new, that take diners through the day with eggs Benedict, grilled-vegetable-mozzarella panini, chicken tinga tacos, roasted sirloin with cream spinach and whipped potatoes, miso-glazed Chilean sea bass.

Meanwhile, Lindenhurst’s burgeoning culinary scene gets a boost from Taheni Mediterranean Grill ($-$$), an import from Brooklyn’s up-and-coming Gowanus neighborhood. What sets Taheni apart from other Long Island restaurants serving Mediterranean / Middle Eastern food is that the cuisine here is typical of the Levant (Syria, Lebanon, Israel, Jordan and Iraq). Taheni is owned by the Deib family, originally from the town of Mas-ha, a Palestinian village in the West Bank. Taheni’s menu comprises pita sandwiches, salads, platters and wraps, all of which can be ordered with falafel, kofte (minced, seasoned beef) or grilled lamb, beef or shawarma-seasoned chicken. This is the only place on Long Island where I’ve seen the snack-sized flatbreads manakish (filled with zaatar, tomato and feta cheese and olive oil) and musakhan (chicken, caramelized onions and sumac). It’s also the only place where I’ve had a baklava milkshake.

More exotic delights await you at Sami’s Kabab House ($$), an Afghan restaurant whose Glen Cove location is a spinoff from the original in Astoria, Queens. This property, set back from the street, has not been kind to its previous tenants (most recently, Vilai, Greek Captain, Chama Rodizio and Tappo), but Sami’s deserves a shot. The succulent chicken Afghani kebab, made with cumin-and-paprika-marinated thighs and served with a heap of basmati rice gilded with sweet, cardamom-scented carrots and raising, is enough for two hungry — and discerning diners. Other highlights include steamed dumplings, meat-filled (mantu) or vegetable-filled (aushak) and a suave lentil soup.

Finally, LI’s barbecue scene welcomes two new players. Garden City is the site of Mighty Quinn’s, the first franchise location of one of the City’s premier barbecue spots. Split wood and big, black smokers are in full view of the customers at Mighty Quinn’s. The smoked meats, whose style franchise owner Jason Wotman characterized as "Texalina," include brisket, burnt ends (of brisket), pulled pork, spare ribs, the signature "brontosaurus rib," (on-the-bone short rib), wings, half chickens and, a new one on me, brisket sausage, whose taste falls somewhere between kielbasa and a great burger.

At Laura’s BBQ ($$) in Glen Cove, the fare is Texas-style, unalloyed. Pitmaster Lloyd Adams is a native of the Lone Star State and over the last 20 years, his catering business has been devoted to teaching Long Islanders the finer points of real Texas barbecue. (He and his wife, the eponymous Laura, also operated Laura’s BBQ Roadhouse in North Bellmore from 2006 to 2007). The regular menu features brisket, pulled pork, ribs, chicken thighs, wings (lemon-pepper wings, Buffalo and barbecued) as well as fried catfish and hush puppies.