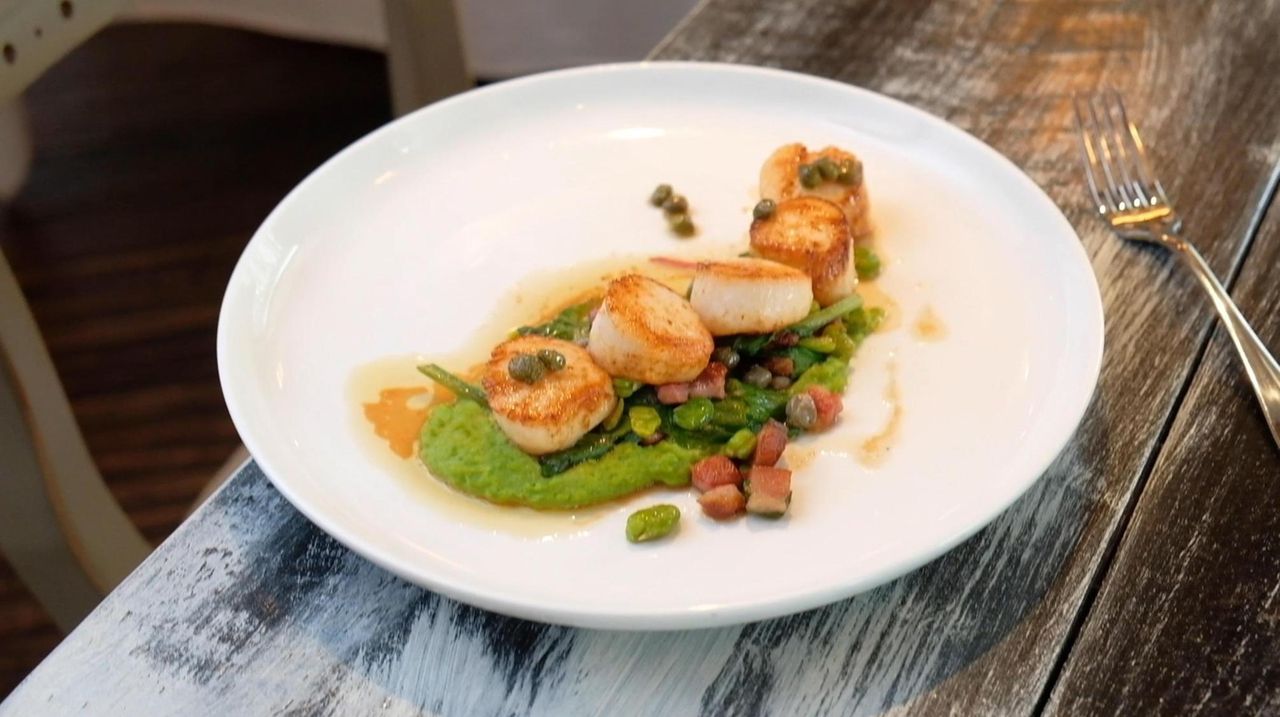 Brian Wilson is the new executive chef at the North Fork Table & Inn in Southold. On April 19, Wilson prepared sea scallops with capers and pea puree, what he called a "celebration of spring." Credit: Daniel Brennan

SERVICE: Highly polished and efficient, yet casual in demeanor

I tried not to love North Fork Table & Inn. I really did. Trapped in dead-stop traffic while driving to Southold — a predicament that increased the trip time from 56 minutes to 3 days — it seemed a cinch that my dinner companions and I would be able to resist its charms. Crawling toward Manorville on a Thursday, my confidence only deepened as night fell, the trees went from oak to pine, the forest from enchanted to “Blair Witch,” the store signs from “Get 5G here!” to “Manure and Eggs.” This is not a road that could lead to a world-class establishment, we agreed.

But then, rounding a corner, we saw it: four skinny pillars holding up an old regal edifice so narrow it might have jumped off the back of a coin put through a penny press. Stepping warily over the threshold, a quartet of food cynics entered a world of exposed rafters and unfussy elegance, its tables properly spaced and sanely lit, its jazz music sanely volumed.

We sat and readied ourselves for the work of North Fork Table’s new executive chef, Brian Wilson, at which point it occurred to me that for the first time in a long while, I would actually hear what my fellow diners were saying, and I prepared myself for an evening of snark.

To my utter surprise, however, my friends were soon raining Pollyanna-ish praise all over our oversize white tablecloth. People I didn’t think capable of rhapsody were calling a plate of scallops “mollusk meltaways floating on a heavenly splotch of pea and almond puree.” One friend said her lobster roll had “large meaty gobbets soaked in lemon aioli” without even knowing what a gobbet was. Wilson’s tuna tartare fun-tumbled in ponzu evinced a “brazen scrumptiousness” from one of us, while another actually had the temerity to call Wilson’s pea soup swirled with mint, yogurt and dill “nothing short of spring in a spoon.” (I would have opted for early summer.) Indeed, for a time, our whole conversation had a brightness, snap and promise rivaled only by the chef’s asparagus with garlic panna cotta.

Word is that Wilson’s immediate predecessor, motorcycling yogi Stephan Bogardus, now up the road cooking at The Halyard, produced his share of myriad fantastic dishes of the food-forward variety, but my guess is that diners will come to prefer entrees such as Wilson’s gnocchi with crabmeat and hazelnuts, whose simplicity recalls the days of Gerry Hayden. And those are good days to recall indeed.

It was Hayden, after all, who along with his wife, James Beard Award-winning pastry chef Claudia Fleming, built North Fork Table into a totem of extra-island renown. From its inception in 2006, the restaurant wasn’t just a place to eat but an ethos, the epicenter of farm-to-table Long Island, an ingenious contrivance for supporting North Fork farmers and fishers wherein seasonal bounty was coaxed into palatal excitement, which in turn enticed foodies by the thousands to gather at North Fork Table. Together, Hayden and Fleming became the island’s pre-eminent food-tasting power couple (this was years before Linda and Joseph Mangano), and even after Hayden’s untimely death in 2015, Fleming continued to hold North Fork Table’s chefs to the highest standards.

Still, there’s something special about Wilson. One minute he is a master of gourmet comfort food (see his tender medallions of striploin plated with a crisp potato gratin) and the next a maker of unlikely matches. What do his fava bean puree and seared octopus have in common? Hardly more than a plate, it seems, yet a plate is all they need. Same for his piquant pairing of seared foie gras with raw tuna, same for his halibut nestled atop a saffron-infused clot of creamy toasted barley.

Even Fleming’s work boasts a renewed vigor, as evidenced by her giggly mocha toffee sundae in a glass, her last-exit-before-insulin chocolate tart with salted caramel ice cream, and her, um, “phyllo Napoleon,” though what could possibly be lean about that collage of cream, white chocolate and sorbet escapes me. Around our table, it was all “heavenly,” and “sublime” and, yes, “over too soon.”

Soon enough it would all be gone — the pine turned back into oak, the manure to 5G, the conversation to snide and sarcastic. It would be a long time before anyone would speak of brazen scrumptiousness again, or spring in a spoon, or gobbets. But the memory of whom we’d been that night lingered, a testament to North Fork Table’s enduring appeal.