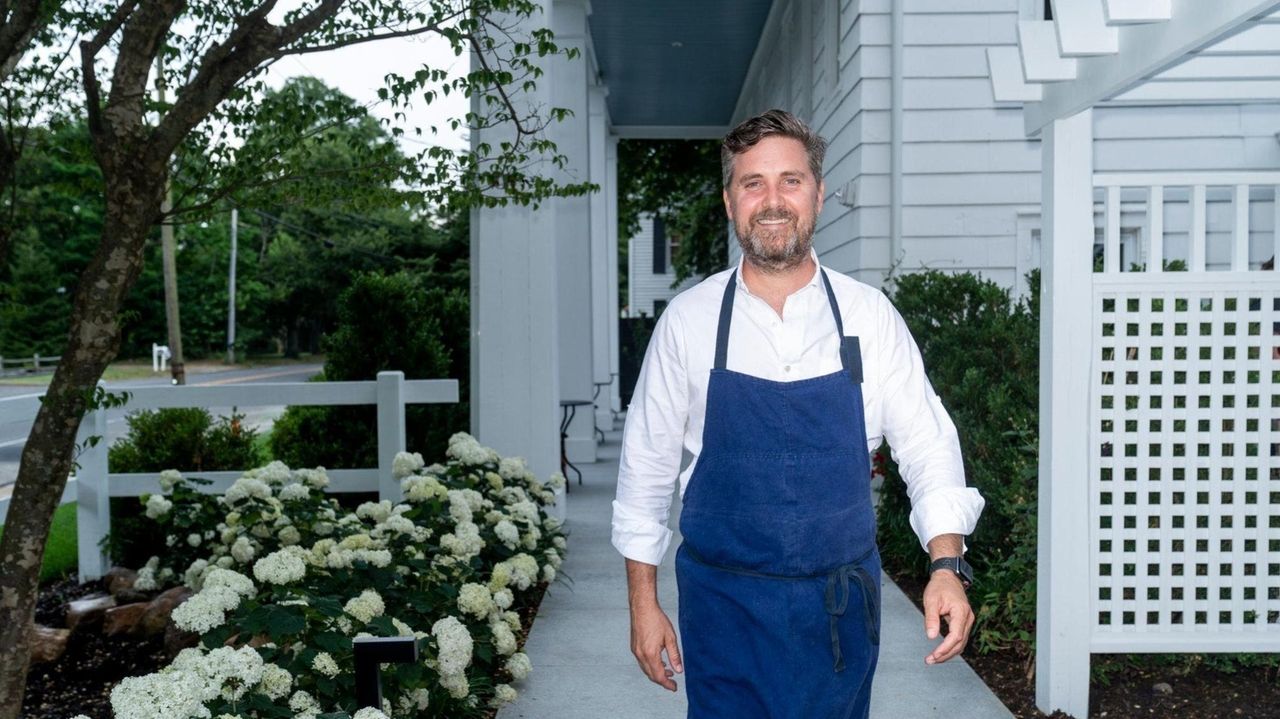 After undergoing a complete renovation, one of Long Island's most acclaimed restaurants is reopening with a new owner and chef, John Fraser. Credit: Randee Daddona

John Fraser has seemingly accomplished the impossible: The new chef-owner of Southold’s iconic North Fork Table & Inn has given it a thorough upgrade that still honors its spirit as a shrine to local produce.

Late last year, Fraser and a group of investors bought the restaurant that led the North Fork’s culinary revolution. Founded in 2006 by chef Gerry Hayden, his wife, pastry chef Claudia Fleming, and two front-of-house veterans, Mike and Mary Mraz, it remained in the very top tier of Long Island restaurants even after Hayden’s death in 2015 from ALS.

When Fraser, noted for his innovative approach to vegetables, took on the Southold property, his JF Restaurants operated seven properties, including The Loyal in Manhattan’s West Village and NIX, a Michelin-starred vegetarian restaurant in the East Village. All of them have now been closed by COVID-19, NIX for good. “Until tonight, I had zero restaurants,” he said. “This is it. All our focus is here.”

Fraser had been vacationing on the North Fork years, and the proximity to farms and wineries reminded him of his formative years cooking at Thomas Keller’s French Laundry in the Napa Valley. He and his chef de cuisine, Steven Barrantes, have been duly inspired by what they have found. An appetizer crudo is little more than local fluke sauced with carrot juice — well, it is a little more: the fluke, sitting in a puddle of jalapeño oil, is topped with a tiny dice of carrots and jalapeño and the sauce has been slightly foamed. He seemed slightly abashed that another starter, corn with broken flageolet beans, was made with New Jersey corn since the local crop hasn’t started yet. That dish is elevated by a generous grating of summer truffle and a crisp little Parmesan hat that sits atop the tender stew like the crust of a creme brulee.

Fraser has been unable to score local chickens (he said that both Browder’s Birds and Eight Hands Farm are “oversubscribed”) but he’s grooving on Crescent ducks from Aquebogue, serving them with honey glaze, husk cherries and polenta.

The pride of the renovated kitchen is a wood-burning hearth fed, in a touch Fraser called “meta local,” with Long Island maple and oak. His signature entree, “The Southold Grill,” comprises four fire-kissed local fish — fluke, monkfish, black bass, squid — arrayed around a Shinnecock sea scallop. Prices are in line with other local fine-dining establishments with most starters under $20 and most mains under $38.

In short, Fraser’s kitchen perpetuates the standard set by Hayden and Fleming, and carried on by Hayden’s successors, Stephan Bogardus and, the last chef, Brian Wilson: to source the best local ingredients and honor them with the most refined culinary technique.

It’s outside the kitchen where the new regime is most in evidence. Despite its lofty reputation, The North Fork Table was always a family affair, a collaboration among two couples who, together, did almost everything that needed to be done around the property. Fleming, a gifted designer as well as pastry chef, once corralled her friends to refinish and reupholster the dining room chairs.

No such economies appear to have been called for in the launching of NoFoTI 2.0: The renovation is positively Hamptonian. Fraser said the budget, including the purchase, was “in the millions. And we are still spending.” The property has been lavishly landscaped; looming over the now densely hydrangea-lined entry passage is a statue fashioned from white Carrara marble. Two stone-floored outdoor dining patios now flank the building and, beyond the parking lot, a landscaped picnic area provides seating for more than 50 food truck patrons.

Inside, the restaurant is unrecognizable. The dining room has been opened up but also made more intimate with the use of both tables and booths, banquettes and plush chairs whose backs are covered in faux shearling. For now, half the tables are set for dining, the others are graced with decorative elements, baskets of beans, platters of tomatoes, potted herbs.

A brand-new bar-lounge has taken over the old “breakfast room” and that’s where you can partake of a more casual menu that includes smoked chicken wings with schmaltz-barbecue sauce, tempura corn with hollyhocks and nori and a half-pound burger made with Acabonac beef.

Beverage director Amy Racine has put together an extensive list of local and international wines (with plenty of affordable options) in addition to an wide range of spirits, aperitifs, digestifs, beers and specialty cocktails. Right now, anyone sitting at the bar is offered a liquid “amuse,” a blue gin and tonic whose gin has been infused with cornflower. And not just any cornflower: the wait staff spent hours picking them down the road at KK’s The Farm, a biodynamic farm whose renown grew in lockstep with the restaurant’s.

Ten flowering herbs from KK’s have also been dried, laid on linen and framed to decorate the entryway, providing a subtle link to the restaurant’s place and history.