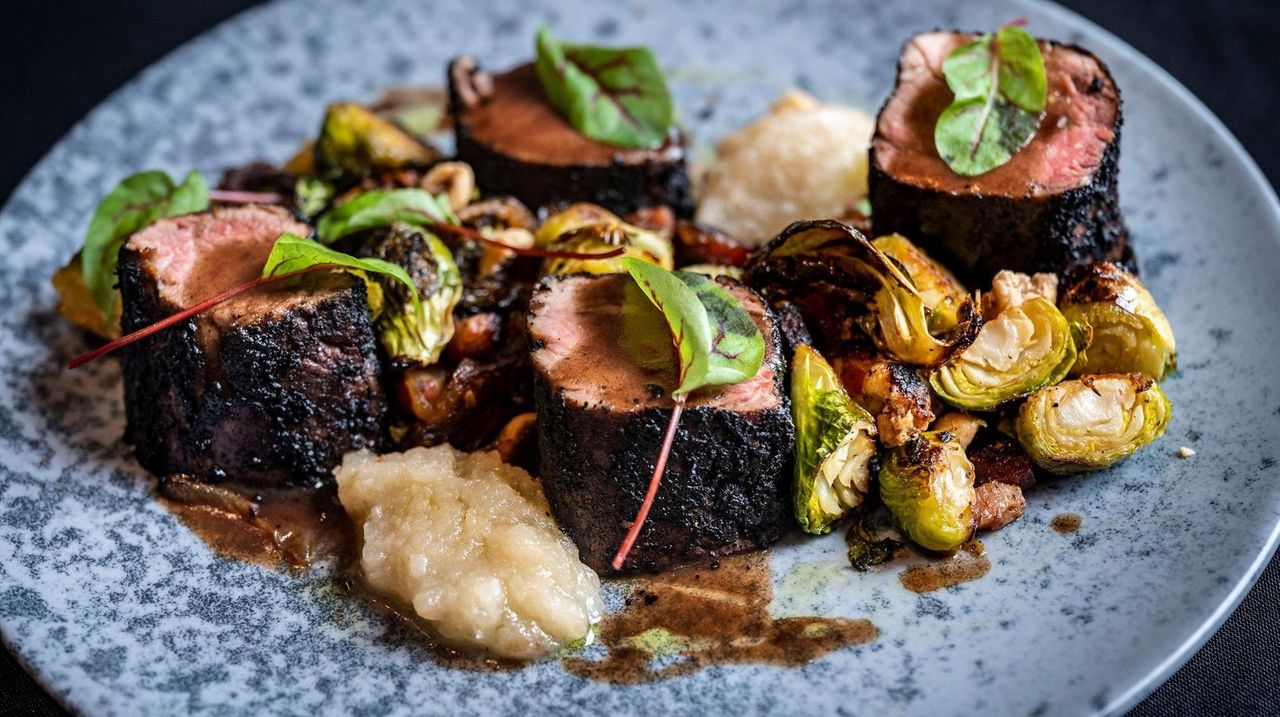 For a long time I did not touch my plate of wild boar at One10, in part because of a strange kinship I felt for the animal, which had come to Long Island from Texas, having been humanely trapped under the supervision of a trained veterinarian, which is very much my own story. Also, like many native Houstonians, I knew the creature not by its preferred name but the one employed by residents whose flower beds the animals typically trample through on their way to infrequent but not unheard of attacks on humans — feral hog. As you might imagine, it is difficult to muster enthusiasm for dinner when someone sets a plate of feral hog before you, or indeed anything else besides another cocktail, another basket of bread or some other stalling tactic.

And then there was the issue of timing. Was now, the twilight of a pandemic, the proper time to be feasting on exotic game in a sumptuous Melville dining room? It seemed at odds with Covid’s legacy of humility and caution.

"Enjoying your boar?" asked the server, startling me out of these ruminations. I froze. Not yet, I mumbled. "Well, don’t let it get cold." I took up knife and fork, not from a change of heart but rather fear of what cold feral hog might taste like.

At this point, you are no doubt expecting me to say something like the boar was a pleasant surprise, and so it was. The meat was exceptionally tender, evincing a much milder porkiness than either of its names suggested. Executive chef Ron Gelish cleverly plated his boar with a slick of apple chutney and a tart hash of Brussels sprouts, pancetta and hazelnuts. Five pink medallions encircled the greens as if gathering around a hearth, each baptized by a spoonful of whiskey au jus concocted by Kevin Mace, another One10 chef. And yet, the dish’s triumphant response to the day’s foundational question — why eat wild boar? — only led to other questions: why here? why now?

Not that exotic animals are completely foreign to One10. On some evenings, its snazzy bar area seems an ideal place to observe leopard print tops in their natural habitat, and Jaguars reliably roam the asphalt savanna outside. One does not expect wild boar to wander onto the menu — or ostrich, or antelope or elk. Since January, however, that is exactly what has happened, in conjunction with a popular promotion called Game Night, which is proving exciting to diners save those who mistake the name as an invitation to "Friends" trivia night or drag bingo. It is the brainchild of Gelish and Francesco Belcastro, One10’s general manager, and though the men are Island natives, both have done tours of duty in game-friendly Colorado kitchens, and dreamed of serving up specialty meats since before the eatery opened in January, 2020.

"Ron and I were always speaking about our love of game and the fact that we both eat elk and bison, and that’s kind of where it started," said Belcastro, seated in the dining room on a quiet Thursday afternoon in April. Soon, Gelish joined him.

"I had a lot of experience cooking it, and he had a lot of love and passion for it," he added, "so we decided to make it a thing here. It started as a night, then became a week, and now, besides our regular guests, we get a lot of people who come just to try something new."

It’s a handy way, too, for the restaurant to distinguish itself from the Island’s other destination steak and sushi palaces, some of them, like One10, owned by Anthony Scotto. Game Night has proved a reliable draw, no small thing given the fevered competition for post-pandemic diners these days. And its growing popularity suggests that Island diners are rapidly shaking off their timidity about where and what to eat, pivoting toward a Roaring Twenties ethos of prosperity and decadence. Whatever the source of this attitude shift, long months of ho-hum cooking, a desire for culinary escapism or some combination of both, on Gatsby’s favorite Island, it seems, Tom-and-Daisying is back.

At the very least, One10’s Game Night specials, which are usually offered Tuesday through Thursday evenings and change weekly, give the lie to those who insist that the Long Island palate is terminally unadventurous.

"There’s a lot of hunters here," Belcastro said. "They’re used to venison, they’re used to duck, it’s a Long Island thing. It doesn’t take much for them to venture out and try ostrich or alligator."

Gelish agreed. "We did a ton of ostrich. I don’t know if it’s because people had never had it before, but we had to 86 it almost every night. We couldn’t get enough of it."

Earlier this spring, Gelish’s elk striploin medallions were such a hit they were held over for a second week. Game Night’s breakout star, however, has been another meat.

"To this day, everybody who tries the bison tomahawk rib-eye for the first time says it’s the best steak that they’ve ever had," said Belcastro. It’s so popular that One10 now offers it daily, and Gelish reported that the restaurant sells 75 or more tomahawks of Colorado free-range bison every week.

Keeping their fans satisfied has required One10 to cast an ever wider net for game. Its ostrich came from Australia, its elk from New Zealand. And with any luck, patrons will dine on nui axis venison (Maui) in the coming months, as well as camel (Australia) and bear (TBA). Still, Belcastro and Gelish insist that they are selling health as much as novelty.

"I guarantee you nobody has ever had it here," said Gelish of the latest special, antelope osso buco. "It has a sweet, finely grained finish, and one-third the calories of beef. All these animals that aren’t bred like cattle have less fat content, because what we do to cattle isn’t natural." Game Night specimens are farm-raised, yes, but free-range.

"Which means they have more amino acids and they’re lower in cholesterol," added Belcastro, "and more omega-3s, just because they’re in sunlight more, and a lot more vitamin D and vitamin K. So it’s healthier for you than some commercial-raised cow or chicken."

And Game Night’s exotic fare is getting diners excited about eating out again, which is a healthy sign for all of us.

One10 is at 569 Broadhollow Rd. in Melville, 631-694-3333, one10restaurant.com. A list of upcoming Game Night offerings is available on the website. Menu items are available from Tuesday through Thursday during the dinner service. Entree prices vary but start at around $42.