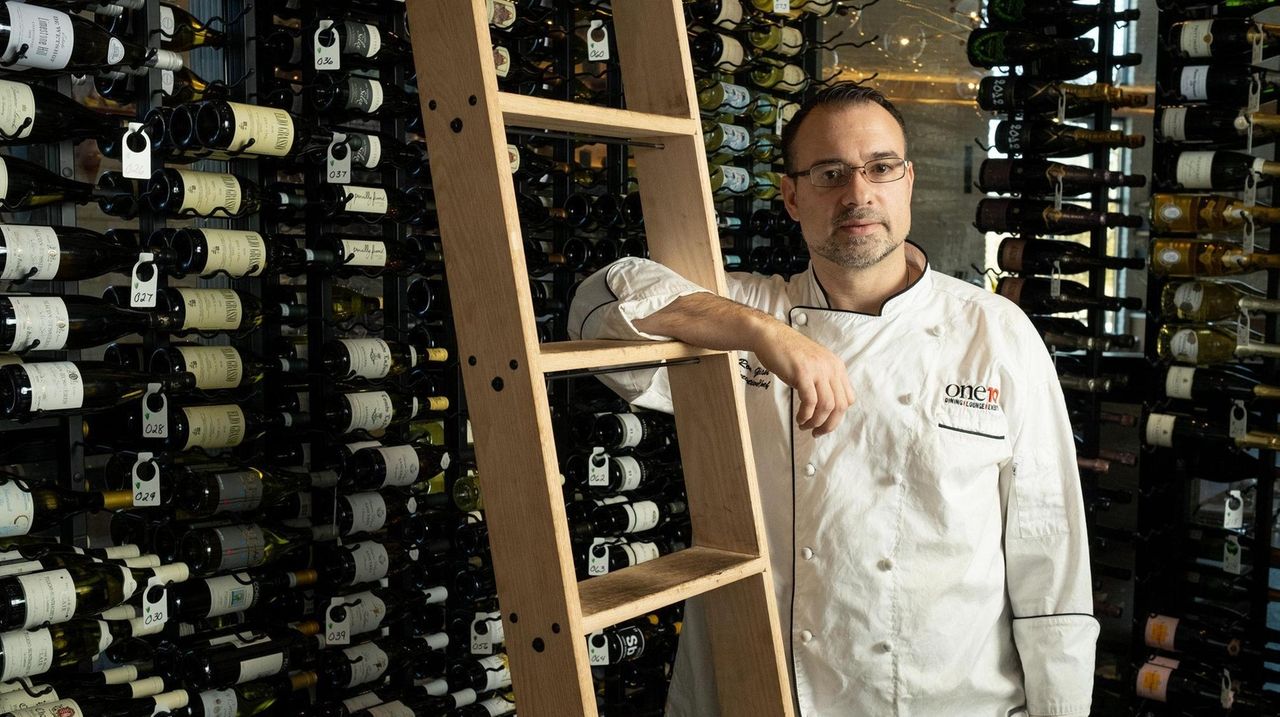 On March 4, the executive chef of One10 in Melville talked about what it takes to run a restaurant that seats upward of 370 people. Credit: Daniel Brennan

SERVICE: Someone really knows how to train staff

There are some who will say it is soaring, spectacular and makes absolutely no sense — the gastronomic equivalent of “Cats.” Others will recall a cruise ship dining room on the first night at sea, when dance contests and ice sculptures still seem fun and no one’s yet realized that there’s no escaping annoying people. Determined eavesdropping by still a third group will detect the harmonious commingling of Long Island past (“Mandatory valet? I can park my own car, thank you”.), present (“I like Garden City’s test scores but Jericho’s teachers are better”) and future (“¿Tienes un menú español?”).

One10, Melville’s new mega-restaurant, is all and none of those things, a foodie Rohrschach that ultimately says more about you than Anthony Scotto, the impresario behind this and other island enormities. What is the cacio e pepe? A small coil of perfection? A disappointment at 22 bucks? Seventy-five noodles in search of a salt shaker? Yes, yes and yes.

What we know for sure: One10 rose phoenixlike from the ashes of a former Wonder bread and Hostess warehouse in January, after months of construction (and a culinary exorcism?). The 14,000-square-foot behemoth’s exterior screams hip public library, but lurking behind One10’s heavy doors is one of Long Island’s most dramatic and impressive dining rooms. It’s a nice thing when a restaurant name-checks its storied neighborhood — at least when that name is, oh, Gramercy Tavern, Tribeca Grill or even Union Square Cafe. I’m dubious about whether a six-lane boulevard lined with office parks and furniture stores deserves the same treatment, but One10 might not be possible anywhere else, especially given its owner’s adoration of Scottoville, I mean Melville, where he now has three eateries.

Thanks to the leadership of executive chef Ron Gelish and a kitchen cast of thousands, One10’s menu is, if not all things to all people, many things to lots of people. A casual perusal reveals many dishes you have likely paid more for elsewhere, along with stellar starters like a piadini — flatbread daubed with a sweet parsnip puree that pairs better with grilled calamari than you’d expect — and pancetta-collared shrimp with white beans. And Gelish’s sourcing, as befits a Scotto property, is impeccable. The M Bar platter presents definitive charcuterie from prosciutto to Parmesan, meanwhile making a persuasive argument for the tomato in winter. Elsewhere, the silky tendresse of Gelish’s fish dishes can be revelatory. In his hands, the Norma-Jean-to-Marilyn transformation of Chilean sea bass from its humble Patagonian toothfish beginnings seems finally complete.

Too often, however, the kitchen settles for acquitting itself honorably. The rigatoni is forgettable (literally — I can’t for the life of me remember what it tastes like), and no amount of spice tinkering can erase the sting of paying $28 for a so-so half-chicken. One10’s steak pizzaiola is a certifiable head-scratcher as well, a clunky geode tumbled in tomato sauce, although the steak salad, with its finely cleaved shavings of skirt meat over a hash of Brussels sprouts, is far better.

Which brings us to the paradox of Scotto’s aesthetic. Its sleek, curvy bartops, glass-walled private rooms for publicity seekers and humongous dining room — a jaw-dropping tribute to beige and taupe that One10’s website calls “subtle,” apparently with a straight face — will no doubt bring in diners by the netful, but they also create expectations higher than the herringbone ceiling overhead. A rollatini whose zucchini is easily mistaken for eggplant, or burnt broccoli singed beyond recognition, might be overlooked elsewhere. In a land of sleek banquettes and white-aproned pros delivering bread with tongs to the blaring strains of Lady Gaga’s “Bad Romance,” however, missteps aren’t so easily forgiven.

Those seeking signs that One10 will someday deliver on the promise of its formidable surroundings should attend to the edges of meals, notably the 54 wines available by the glass and the cocktail program, whose amusing inventions include a margarita aged 90 days in a whiskey barrel. Even more inspired: One10’s desserts, the finest I’ve had in a year of eating. The marvelous lemon semifreddo, tiramisu and devil’s food mousse cake are bested only by One10’s deconstructed cannoli, an after-dinner masterpiece disguised as roadkill. Its shattered shell, fior di panna gelato, pistachios and chocolate sauce make for an elegant madness, a fitting companion to Scotto’s mad elegance.