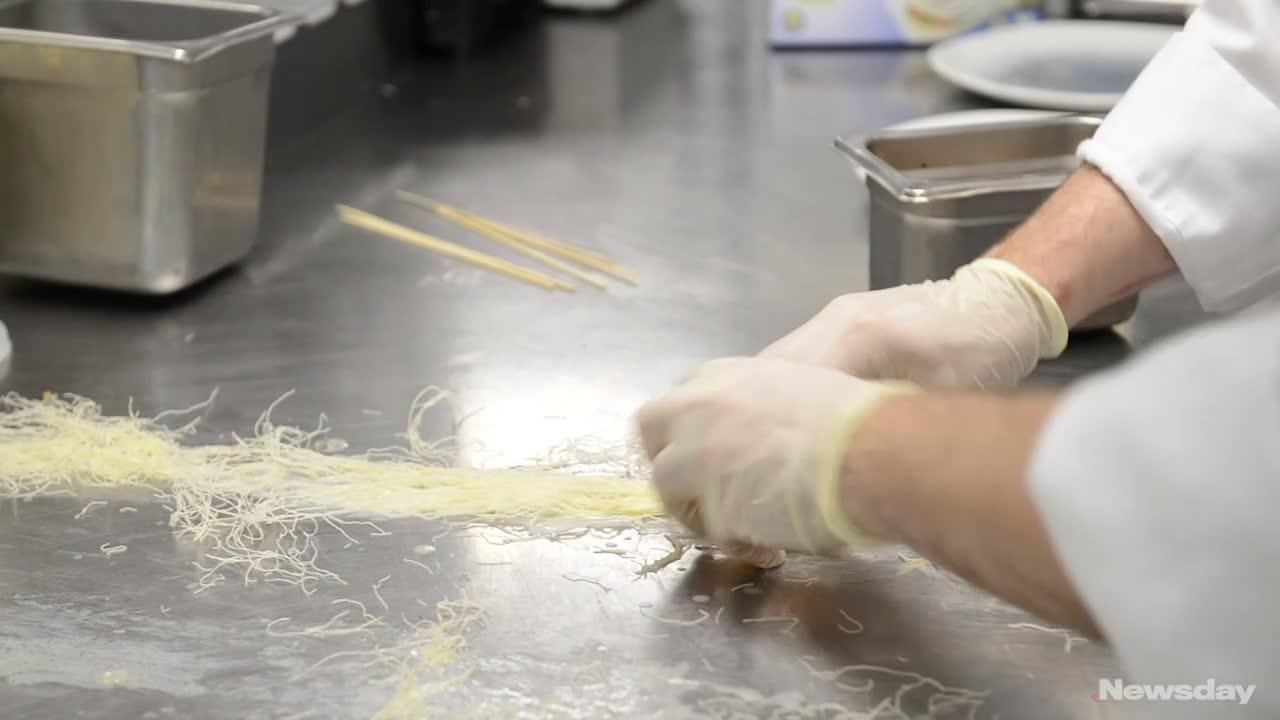 AMBIENCE: Summer in the country

ESSENTIALS: Open for lunch noon to 3 p.m. Monday to Friday, dinner 5 to 9:30 p.m. Monday and Tuesday, to 10 p.m. Wednesday and Thursday, to 11 p.m. Friday and Saturday, and 4:30 to 9 p.m. Sunday. Reservations recommended on weekdays, necessary on weekends; major credit cards accepted; wheelchair access with ramp at entrance.

Greek Revival usually refers to architecture. Now, it applies to dining out.

Oniro Taverna in Woodbury is the latest local entry for splashy Aegean and Mediterranean cuisine. The dining room, packed as diversely as a drift net, is almost as full as the display of seafood on ice. Long-awaited, Oniro makes an immediately popular entrance.

That shouldn’t be a surprise. It’s an offspring of Limani in Roslyn, the grand and grandiose restaurant where Oniro owner John Alciviades is a partner. Since it opened in 2008, Limani has consistently been one of Long Island’s top spots for sea fare. The Northern Boulevard temple to opulence also is known for its dependably high tab.

Oniro, while no bargain, is more moderate and less formal. And its look is bright and countrified rather than the paradigm for over-the-top. The transformation to Oniro from earlier restaurants at this address, such as the California-themed Honig Grill, the suburbanized spin on P.J. Clarke’s, and Majors Steak House, is as thorough as possible, short to bulldozing the low-slung building. The summery look of the dining area takes in bleached-wood tables, olive and orange mini-trees, baskets and basket-weave chandeliers, images of fish, hues of oyster and bark. It could be a movie set.

But you’ll focus directly on the seafood show and the open kitchen behind it, under chef George Nikitopoulos.

The moment you’re seated, which may take a bit, order the smoky grilled octopus appetizer, with its puree of giant beans; or the tender rings of grilled calamari, with peppers and capers. You can stay comfortably seaside with the “deconstructed” salmon tartare, a mound of silky fish, with black sesame seeds, avocado and eggplant puree.

The elemental eggplant opener, however, combines thin slices of it, zucchini and yellow squash for an expertly fried tower set on tzatziki. Melitzanosalata, an eggplant spread, improves on the routine potato-and-garlic skordalia and mild taramosalata, with herring roe. You’ll empty the basket of warm pita triangles and hummus.

But scallop risotto becomes a pasty and overdone assemblage. Moussaka made with seafood drowns in blandness as well as its dreary, thin béchamel sauce. Restore your appetite with the velvety, pan-seared, sesame seed-crusted rare tuna, set on spinach, spurred by wasabi aioli.

Oniro’s big fish, however, is the whole grilled red fagri for two. The firm, flavor-packed Mediterranean fish often is compared with sea bream and snapper. But the meaty fagri has its own well-defined appeal. Red snapper is an excellent alternative for one person, as are black sea bass and dorado, or sea bream. The ever-popular branzino also is a regular.

You can forgo the special of grilled Scottish langoustines, which turn up ultra-charred and dry. These delicious shellfish, which look a bit like small, slim orange-pink lobsters, need the griller’s full attention.

Oniro does have a few dishes for carnivores. The grilled Colorado lamb chops are best ordered rare or medium-rare.

Oniro means “dream.” When the galaktoboureko, or custard pie, and the loukomades, or honey fritters, make an appearance, it could come true.

What to eat (or not) at LI's first Top Golf
Alberta leader apologizes, imposes restrictions and passport
DoorDash sues New York City over rights to customer data
'Clyde Frazier's Wine and Dine' closes after nine years
Nassib's strip-sack helps Raiders in OT victory over Ravens
Top Thai restaurant closes due to worker shortage
Didn’t find what you were looking for?