Sidewalk bars, pop-up dining tents and other creative settings are injecting a dose of fun into outdoor dining, particularly in downtowns where patrons can explore a suddenly wider range of restaurants offering al fresco service as Long Island comes out of coronavirus stay-at-home orders.

“This has really invigorated the Oyster Bay community,” says Brad Berrol, who owns ITBGL, a bagel and pizza spot on Main Street. Like many restaurants in town, Berrol ekes an outdoor existence--it's two sunny tables and some turquoise benches at his 10-month-old establishment--but he and his fellow merchants are petitioning the town for a partial closure of Main Street.

“Anecdotally, we’re seeing people drive in from Roslyn and Port Washington” for a taste of the excitement, he says.

In Babylon, it took four dump trucks full of sand and nine hours to construct a new downtown shoreline behind Mary Carroll's.

“We just turned a blacktop parking lot [into the beach] basically overnight,” said Conor Hartnett, who has owned the bar-restaurant for 23 years. What Harnett calls "such a simple idea" is an emblem of the inventiveness that has transformed downtowns such as Babylon's into walkaround parties, albeit somewhat muted ones given the odd circumstances.

New Orleans, or….Babylon? This was the existential question that replayed in my head while walking around the latter on a muggy Thursday night. In my left hand was a plastic cup of pink peppercorn-infused tequila and blood orange soda, procured from The Brixton's sidewalk bar; in my right, an iPhone for taking video of all of the other outdoor bars and festivity spilling down Deer Park Avenue.

There were plenty of other people with drinks in hand from the walkup bars at The Argyle and Molto Vino. New outdoor tables had sprouted up and down the sidewalk and down the alleys leading to the enormous municipal parking lot, where the more languid revelers had spread blankets on the groud near Swell Taco.

Behind Mary Carroll’s was that expansive new beach, sand and all, with 19 turquoise picnic tables. 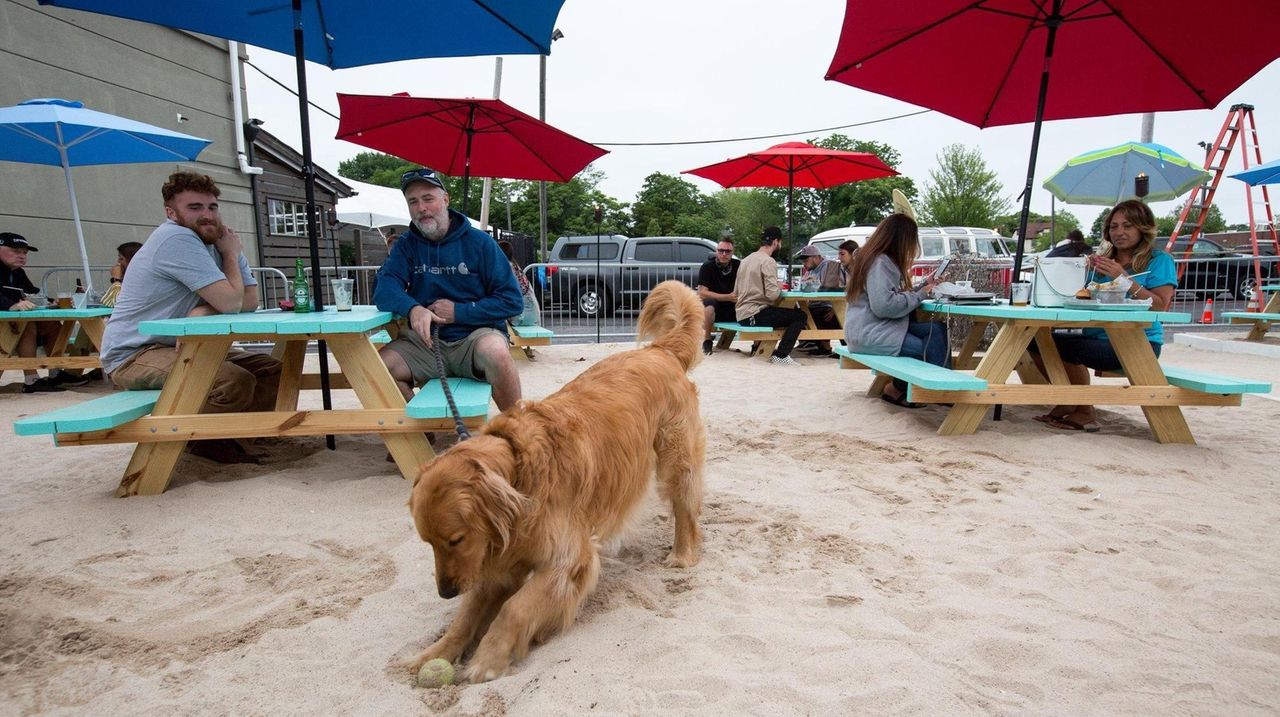 “This wasn’t there before, right?” I asked the hostess. Every one of the tables was full, and she was adding names to her lengthy list.

Eating and drinking microcosms unfold all over town, from the long line at Swell Taco’s takeout window (where you can snag some shrimp tacos and Surf Wax Rum Punch) to the festival atmosphere outside of the wine bar Barrique, where outdoor tables spilled down the adjacent alley and there was, as at other places, a long wait for a table to tuck into meatball-topped pizza and charred octopus.

“It feels like Little Italy with so many people out on the sidewalk,” said Hartnett. “I think we all hope it will stay. It seems to be one positive that's come out of this, and a good distraction from reality."

Social distancing can occasionally be illusive when people throng sidewalks, but the more cautious can head to the outer reaches of walkable downtown — such as the giant tent that’s been erected next to Lily Flanagan’s, where there’s an outdoor bar with $8 margaritas a new food truck slinging burgers and lobster rolls.

Another quietish spot is the new sidewalk patio at The Local, facing the LIRR station, where a friend and I lingered at a table for tuna poke tacos (actually served on crispy wontons) and a mayo-laced lobster roll. My drink there, a slurry of bourbon, rhubarb and puréed strawberries, was summer liquified.

“You know, that drink will taste better if you don’t drink it through the straw,” said my friend gently. She’s a bartender — out for the first time since quarantine began — and was about to launch her own line of canned cocktails, another silver lining of the spring lockdown.

She was right — it did taste better without a straw. A pro tip for the new age of walk-around drinking.

Huntington has always had a lively outdoor dining scene but COVID-19 has really turned the village inside out. In addition to the sidewalk tables usually set up along New York Avenue and Wall Street, now, it seems, every spare alleyway and parking lot has been turned into an impromptu dining room.

If you’re making the scene before dark, have a seat at one of the picnic tables outside Cafe Revue, which has, temporarily, been liberated from its home inside Book Revue. There’s a full line of expertly crafted coffee drinks (made with Southdown beans) and a casual menu of sandwiches and soups including the “all day egg sandwich” made with two eggs, Cheddar and Pepper Jack cheeses, Benton’s bacon, avocado and sriracha aioli on homemade focaccia.

Hang a left on Gerard Street and you’ll see the big tent erected in the parking of Joanina, a local favorite for Italian. One block west is a line of socially distanced tables on the sidewalk outside Konoba, Long Island’s only Croatian restaurant. The cuisine of this former Yugoslav republic is at the intersection of Italy (lots of olive oil), Eastern Europe (lots of potatoes and cabbage) and the Balkans (lots of grilled meats and phyllo pastries) and Konoba (“tavern” in Croatian) is also a great place to sample the glories of Croatian wine. Just beyond Konoba is the spirited gastropub, Vauxhall.

Wall Street still boasts outdoor tables from Almarco (casual Italian), Jonathan’s Ristorante (elegant Italian) and Cafe Buenos Aires, and now the latter’s tables snake around the corner into the alley just north of the restaurant. It’s a cool spot for tapas and Argentinian fare. Order the mixed grill for two and a little tabletop grill will be delivered to your table so you can attend to your own sausage, sirloin, chicken, lamb chops and short ribs.

If you continue down that alley you’ll come upon a brand-new Jamaican spot, Rasta Shack Island Spice, the successor to another Jamaican, Mobay Breeze. There are a few tables set up just outside the counter-serve restaurant whose menu includes Jamaican specialties such as oxtail, curry goat, jerk chicken and whole fish served brown-stewed, fried, escovitch (sweet-sour) or steamed.

Look up from your jerk; before you are arrayed a motley crew of eateries that ring the municipal parking lot. To your right is Vauxhall’s equally hip sibling, New Wave Burrito Bar. To your left is Ichiz, the Japanese-inflected small-plates specialist that — who knew? — has a charming bamboo-shaded patio. Further west you can see the party at cult sports bar, The Rust & Gold.

Head south on New Street where Old Fields BBQ has tripled their outdoor dining space, accommodating barbecue lovers and their hopeful dogs. Across the street, the new New American Leilu has not only set up tables on the sidewalk, but has commandeered a little slice of alleyway and, with the help of a picket fence, has transformed it into a proper patio.

A block further south — and away from the hustle and bustle — The Shed offers sidewalk dining (and a few more tables on its porch) where you can enjoy its brunch-inspired menu from morning till night.

For the first time in — OK, I’ll say it — maybe ever, people are talking about a sidewalk ballet in Oyster Bay. The dance in question, whose peculiar beauty is best glimpsed during long summer sundowns, occurs at the corner of Main and South streets downtown, extends just one block or so in each direction, and is unabashedly pandemic-driven. If not for the townwide desire to avoid stuffy, droplet-heavy interiors, residents would never have fled to the comparative safety of the streets, umbrella-ed cafe tables wouldn’t be spilling out of restaurants and the lost art of people-watching would have remained so. But whatever. The O Beezy has fallen in love with this chaotic, newfangled thing called a shared environment and no one seems to miss the avenues past.

“This mask thing is such pain in the …” announces a well-coiffed woman at Cafe Al Dente, pulling a paisley number over her head just in time to catch and quarantine the rest of her sentence. She doesn't seem the type to curse, or sit on a sofa in anyone’s parking lot. But here she is doing both, swanning past table after outdoor table — 15 in all — on her way to the restroom.

Most people here are only too happy to enjoy Buffalo calamari not from a takeout tin. The rigatoni norcina benefits from proper plating too, as does the linguine Sinatra, but it’s the cafe itself, now insistently romantic, that benefits most from the new normal. That said, table talk without the cover of a noisy dining room can be something of an adjustment.

Someone humming “Help Me, Rhonda” mingles in the night air with “Rolling in the Deep.” The Adele can be traced to a narrow alleyway across the street with five tables belonging to Wild Honey, which solved the problem of outdoor real estate by creating an overflow area behind the building. Raw Blackberry Point oysters are popular here, while handsome halves of roast chicken grace the eatery’s marquee tables on the corner. There are even a few more in front of a shuttered frame shop next door, just a stone’s throw from the clam-dotted Baymen pizzas down the block at ITBGL, soon to be renamed IT Bagel and Pizza.

Other like minds have been converging on The Homestead, with its fine courtyard area and dozen tables clustered around a fully-stocked outdoor bar. An unscientific survey suggests a decided preference for the Coronita, which is what results from a bottle of beer capsizing in a frozen margarita. “We used to call it a bulldog,” shouts the bartender to an expediter toting a plate of baked clams with “our famous breadcrumbs” to the table of a patron who is beyond thrilled about an upcoming salon appointment — “this mop is finally getting cut on the 27th!”

At Autentico, not a hundred feet from the Homestead’s door, a more genteel scene is playing out, but with a twist. A small change — a few white, cabriole-legged tables adorned with small vases of blue hydrangeas have been carted onto the sidewalk — somehow transforms the experience, adding a dash of magic to dishes that always seemed to outclass the artificial greenery indoors. The pappardelle Bolognese and drunken octopus have long brought satisfied smiles to diners’ faces, of course, and the chef Francesco Pecoraro’s handwritten menu is no less frustratingly illegible in the twilight. Yet the place seems just a bit more autentico on the sidewalk, a detail from a townwide tableau that wouldn’t be out of place on the streets of Florence or Milan, assuming that the Italians are similarly preoccupied with haircuts and masks.

3 foodie road trips you can take on LI this weekendEat your way around LI with these itineraries (at a safe social distance, of course). 20 great places to eat outside right nowThese LI restaurants are getting creative as they welcome patrons back in pop-up patios, waterfront decks and more.

4:20
Inside LI's top-rated restaurant on Yelp
Picasso artworks auctioned for combined $109M in Las Vegas
2:31
Everything you need to know about eating at LI raw bars
Where to find great burgers on LI
Sri Lanka gives booster shots to front-line workers, seniors
Try something new: Recent LI restaurant openings
Didn’t find what you were looking for?