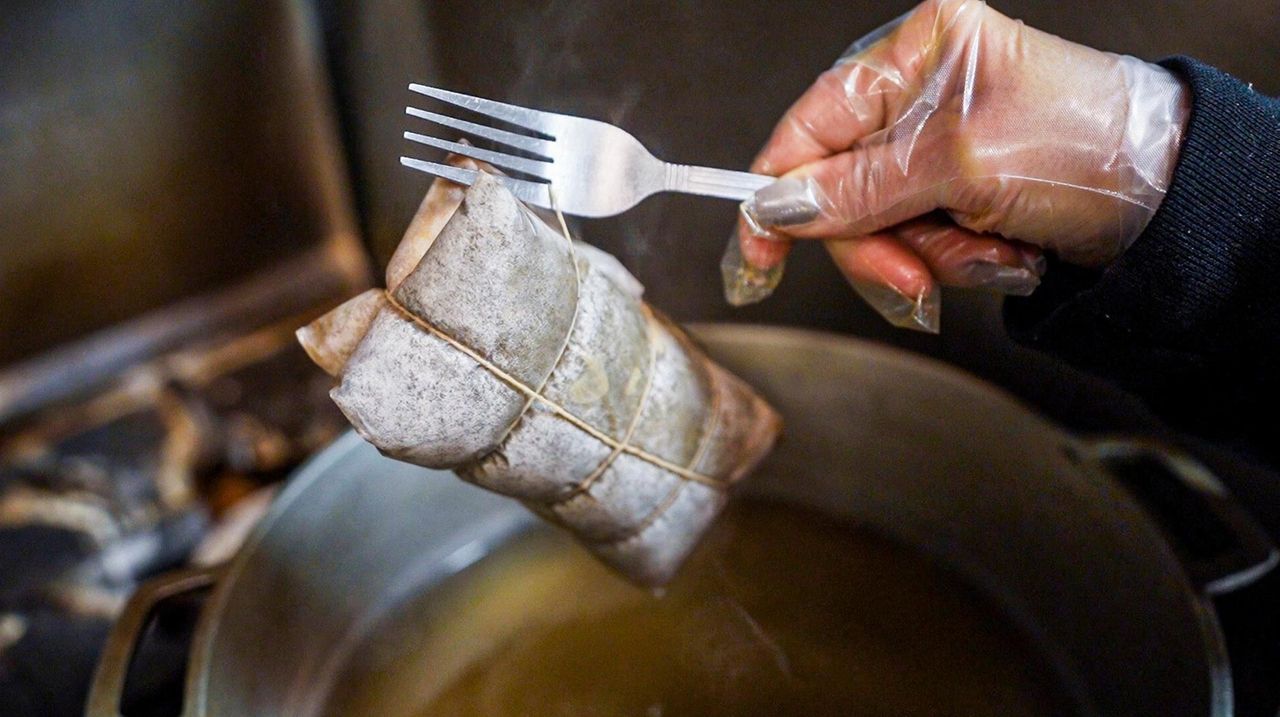 You didn’t hear this from me. Not far from the geographic center of our island home, tucked inside an unremarkable strip center where you’d never think to look, there is a woman — perhaps the only person in the area — making and selling a true food treasure. It's an authentic aliment that sits at the apex of Puerto Rican holiday cooking, a little treat called pasteles, also known as impossibly cute meat pockets, a single bite of which can induce ecstatic states and lies about heritage. And the reason you didn’t hear it from me is, I have it on good authority that whoever blows Marisol Vega’s cover and exposes the location of the 2,000 or so pasteles she makes each year will be marked, sparking protest from in-the-know types who wish to continue enjoying her wares without having to fight for them, an anger from which no pastele protection program could ever keep safe.

You know what? Let’s forget the whole thing.

Forget the moment, eight years ago, when Roy Pelaez, the Bronx native and impresario behind Island Empanada, asked Vega if she knew how to make pasteles, which he had adored since boyhood. And forget too that Vega knew exactly how to make them — having been schooled by her Puerto Rican grandmother as a child in Brooklyn — and knew too why they are almost impossible to get these days. And no, it’s not a supply-chain thing.

"The process is long," said Vega, who worked in the first Island Empanada in Ronkonkoma, which opened in 2011, and now owns her own franchise in Medford. "It takes maybe four days — two days to prepare, and two days to assemble them." Indeed, the time and labor required are no small reason why Puerto Rican pastele-making is synonymous with the Thanksgiving and Christmas holidays, when extended family members typically gather in huge numbers, greatly expanding the workforce.

"Here, you have just me and her," Vega continued, nodding at her assistant Yadira Romero in the Medford kitchen, "but back home the whole family would get involved. The kids would tie them, the grown-ups would grate the masa, the grandmas would make the meat. Everyone in the family has their hand in making a part."

Pelaez, who apparently spent quite a bit of his childhood at the grating station, winced at the memory. "We used the old-fashioned cheese grater, which is quite sharp, and you’d hold it and grate and grate the root vegetables, and these older Puerto Rican women would just yell at you ‘Keep grating!’ until basically your knuckles were being smashed into the grater," he recalled. "There was some tough love there, and some great masa."

These days Pelaez’s toughest job is coming to terms with the runaway success that is Island Empanada. His daughter is about to open his 10th location, in Oakdale, and the first to sell beer, wine and Pelaez’s own sangria. "After that we have another five stores that have been sold. The franchisees are looking for locations." He still seems baffled, albeit happily, by Island Empanada’s rapid expansion, so much so that he’s hardly had time to notice the growing hubbub over pasteles. Like empanadas, he said, they were a "huge hit immediately," although mass producing pasteles presents a unique challenge. "We have to keep it low-key because the demand far exceeds the amount that we could ever make."

"Before she even puts up the sign up, I’m already there," Luis Medina told me. The Moriches resident has been known to take off work during the week just to make sure he and his wife don’t go pastele-less. "Being a Spaniard, I’m very picky, but they hit my taste buds perfectly," he said, which is why pasteles have become an integral part of the Medina table at Thanksgiving and Christmas. "We also cheat before then," he added with a laugh. "That’s why we have to keep buying more."

Medina didn’t seem to have a problem with publicizing the Medford pasteles, but he was in the minority. I tried to get some of Vega’s customers to speak about them, for a while texting a guy named Santiago whom I’d heard sends pastele care packages year after year to family members around the country. Wouldn’t he love the chance to tell the world how wonderful they are? "No," came the reply.

"She is going to have to make way more," insisted Damaris Ortiz, who has already ordered 10 dozen pasteles for holiday gatherings this season, having learned from past disappointments. ("I remember when they ran out last year. I was heartbroken.") The Mastic Beach resident and Puerto Rican native maintained that Vega’s pasteles are as authentic as they are delicious.

In her Island Empanada kitchen, just after 8 a.m. on a Wednesday morning, Vega — where pastele production is confined to hours when the store is closed — exhibited results of the previous day’s work, a large container of meat filling, its glistening bites of pork shoulder long-simmered in sofrito and infused with fire-roasted peppers, tomato sauce and green olives. Nearby sat the container of masa, a thick paste of white yautia root, green plantains and pumpkin. That too had taken a whole day, even with an electric grater.

Two years ago, when I first heard about Vegas’ pasteles from a die-hard fan, I didn’t understand the excitement. I’ve had tamales, I replied, which by the way is something you should never say to anyone who loves pasteles. Anyway, I soon discovered that the comparison does favors to neither dish. Corn masa, which gives tamales their distinctive sweetness and mealy texture, is not used in pasteles. The second half of the process, their assembly and cooking, is different as well.

That was Wednesday’s assignment, and it began with Vega and Romero painting thin layers of achiote oil onto plantain leaves before carefully loading each with dough, meat, then dough again. After wrapping the pasteles in leaves and parchment paper, the packages were securely, elaborately tied with string. A final step saw Vega tying pasteles together in pairs, like a skydiving couple, and freezing them. They're sold frozen by the half- ($20) or full dozen ($36), while they last--and only at the Medford location. Customers just need to plunge them into a pot of boiling water for an hour and serve.

Which brings us to the paragraph I’ve been dreading, the one in which I stumble through a description of pasteles’ specialness for the benefit of the unfamiliar. My first observation is that anyone unwrapping them and expecting tamales will be pleasantly surprised by how juicy and tender pasteles are by comparison, and that anyone who loves the heat and showiness of chili powder and cumin should stick with tamales. Pasteles are milder fare.

Upon reflection and a thesaurus consultation, I have decided that the only word to describe them is delicious. (I know, sorry.) So delicious, you can well imagine people taking off work and racing to Medford whenever word arrives — via some back channel, no doubt — that Vega has produced another batch of pasteles for sale. So delicious, it makes perfect sense that a code of silence has descended on all lucky enough to get them, an unspoken promise to tell no one. So delicious, you never hear anyone crowing about them on social media, or slipping and saying something that might show up on a Google search, effectively controlling access to the mere 200 dozen pasteles Vega makes each season. So delicious, their anger upon discovering that the secret is out will be completely understandable. So delicious, they likely won’t rest until the stoolie responsible for this outrage has been hunted down and clocked.

Good thing you didn’t hear it from me.