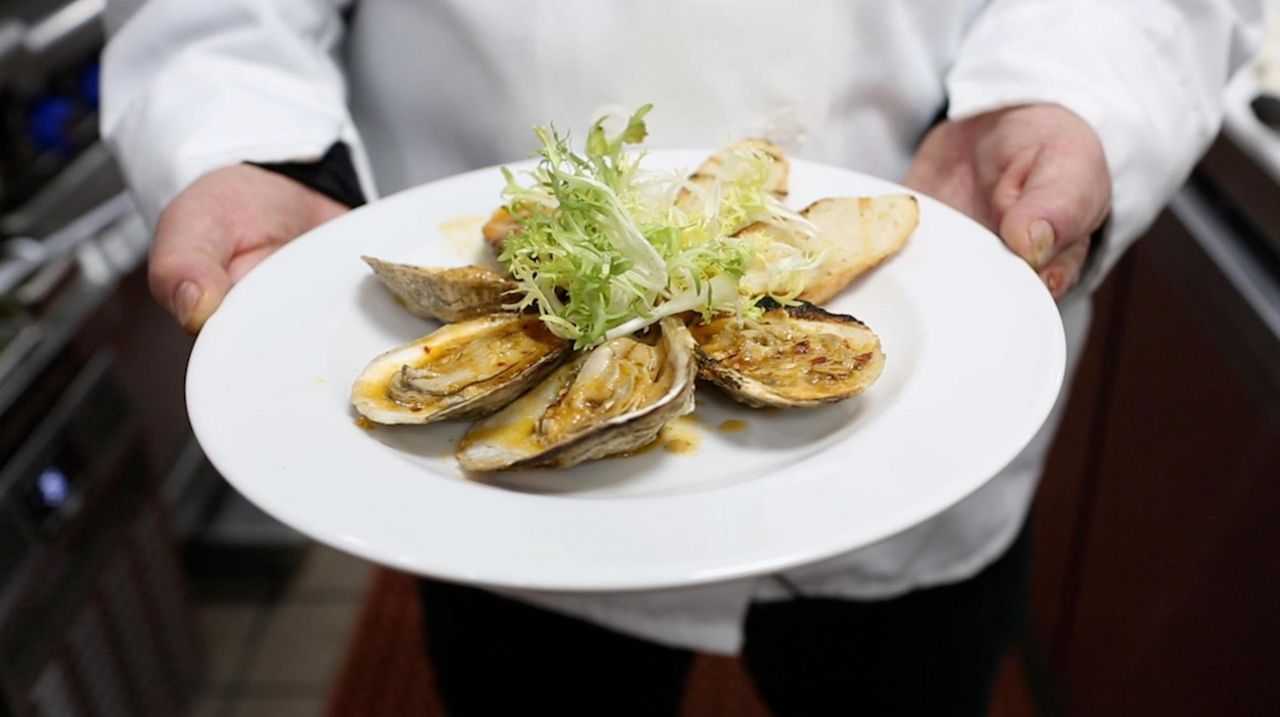 The Pearl is serving up plump oysters topped with a lemon-Sriracha butter, and chef Michael Ross gives insight on how he prepares this dish.  Credit: Yvonne Albinowski

It’s a mysterious alchemy that makes a new restaurant a hit, and Pearl in Island Park seems to have blended the ingredients in precisely the right proportions.

Less than three months after it opened, it’s buzzing on a Tuesday night, full on a Wednesday, booked solid in advance on a Saturday. It appears to be the restaurant that Island Park has been waiting for: chic, contemporary and friendly.

And grown up. I didn’t realize until I sat down how rare truly comfortable seats have become. Tables here are set with white linens, plates are round, stemware is delicate, flatware is well balanced. There are no bare light bulbs or visible air ducts. No barns were harmed in the making of this restaurant. (The only design flaw is acoustical: foyer, bar and dining room all share the same high-ceilinged box, and the sound level can approach cacophony when it’s a full house.)

In the kitchen is Michael Ross, whose long résumé includes Gabrielle’s in Rockville Centre, Fiddleheads in Oyster Bay, Jedediah’s in Jamesport, Bel Posto in Huntington and Jewel in Melville. This is a reunion between the chef and his partners, Paul and Candy Holand, who all worked together 25 years ago at Pasta Grill in Syosset.

At Pearl, Ross has fashioned a contemporary, mostly seafood menu that showcases his experienced hand. Starters, in particular, have a very high percentage of it. Every night, the raw bar features local littleneck clams and three oyster varieties, one local, one West Coast and one from somewhere else along the East Coast. If you’re a bivalve buff, you’ll also want to order the fat grilled oysters, in a lemon-Sriracha butter whose every last drop you’ll want to soak up with grilled bread, and the lemon-panko clams, fried to a frangible crisp.

The de rigueur octopus appetizer is on point — one pointy-fingered tentacle draped over an artful arrangement of black sesame paste, chickpeas, olives, tomatoes and, the dish’s MVP, tiny Sweety Drop peppers that pack a sweet-tangy punch. Fresh pasta in a fragrantly herbal tomato sauce with big chunks of lobster needed only a shot of salt to make it sing.

The crab and sea urchin pancakes were tasty, but the luxuriant texture of the sea urchin was lost once it hit the batter. The only real disappointment among the appetizers was the “green gem” salad. Not to be confused with darling, tender “little gem,” this lettuce variety is a cross between Boston and romaine and more robust than both its progenitors. Neither the sweet vinaigrette nor the blanket of ricotta salata highlighted its virtues.

As assured as they are, Ross’ entrees missed the high bar set by the appetizers. Most follow the same game plan: well-cooked protein resting on a puree covered with a riot of garnishes — crab, leeks, shallots, mushrooms and spinach on a vermouth cream in the case of the halibut; mushrooms, farro and hazelnuts on a parsnip-turmeric puree in the case of the salmon; cauliflower, leeks, fennel, shallots and raisins on a cauliflower puree in the case of the arctic char. Microgreens abound. (Sidebar on microgreens: Chefs, they may look pretty in the kitchen, but once they arrive at the table, the heat of their dish wilts them into limp cliché.)

I don’t think it’s a good sign when I need to consult the server or the menu to figure out what exactly is on my plate, nor does a great piece of fish benefit from all this hoopla. But a survey of seafood menus on Long Island makes it plain that I’m in the minority here, so I will note that the char, in particular, was a gorgeous dish, its orange flesh offset by the soft purple cauliflower.

I also commend the exemplary roast chicken (on a bed of mashed sunchokes with multicolored carrots) but ding the pedestrian lamb chops, whose garnish comprised yogurt, olives and tomatoes and a handful of toasted gnocchi.

Pearl hasn’t got a pastry chef and the kitchen has come up with a roster of likable desserts that can be assembled without a great deal of technique. Lovers of bananas and puns will thrill to the “bananage a trois,” a layered parfait of banana pudding and banana cake, topped with brûléed banana slices.

On both my visits, I received superlative service, from the server who expertly paced our meal to accommodate two rounds of appetizers (and plenty of share plates), to the sommelier who assured me that, yes, my wine had gone off and promptly gave me a new glass. Pearl has an imaginative wine list (including 16 by the glass), beers from far and wide and Oceanside (Barrier Brewing) and plenty of craft cocktails.

Right now, Pearl occupies only the southern third of the renovated building that, for decades, housed Long Island Exchange Antiques. But a second dining room, to handle Pearl’s dinner overflow as well as parties, is about to open. I predict it will fill up quickly.