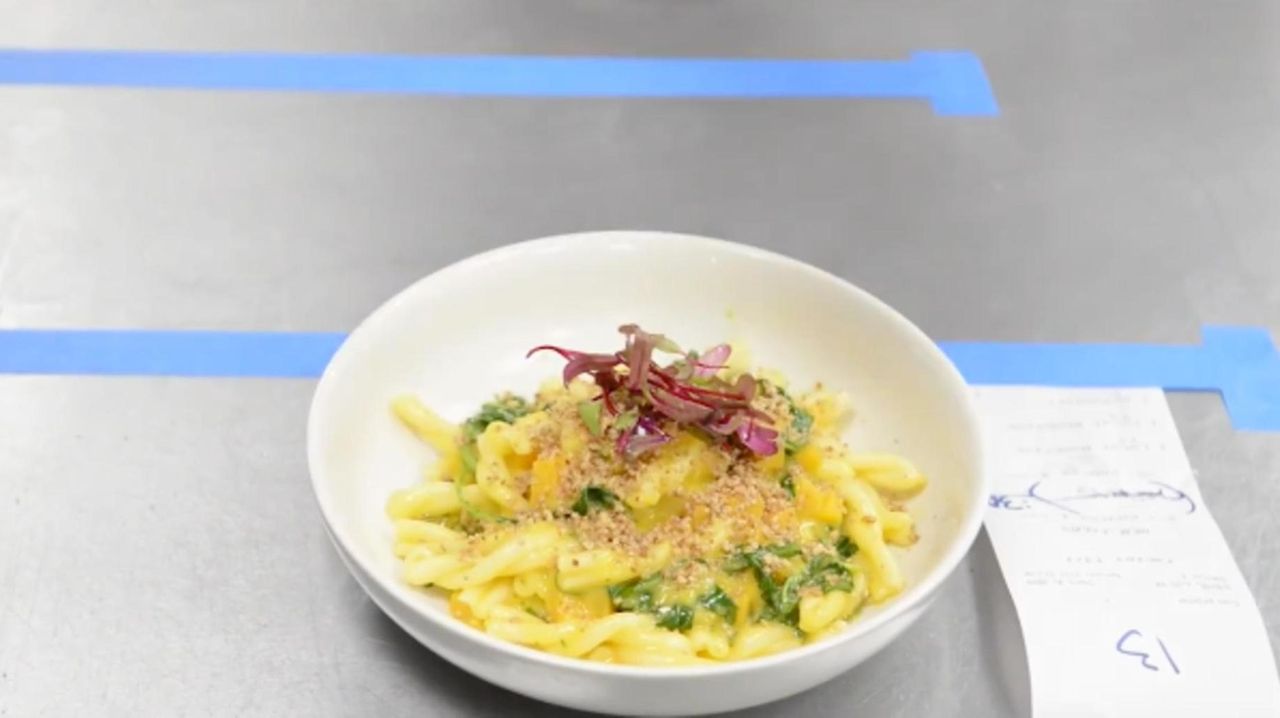 You might not have even noticed Perennial, whose understated storefront on Franklin Avenue in Garden City consists of a gray awning, a tiny logo, a white curtain in the window and not much else.

Behind that curtain, though, is a restaurant (and chef) firing on many cylinders with honest, occasionally sublime cooking that highlights the essence of hard-won local ingredients.

Chef Peter Mistretta was working as a private chef when he began setting down plans for Perennial: a farm-to-table restaurant showcasing local produce, fish, meat and wines.

When I first heard of Perennial, I wondered if he would, or could, pull it off. It’s not that Mistretta lacked experience: He had worked as a line cook at New York City’s Back 40 under chef Peter Hoffman, who helped pioneer farm-to-table dining (at another Manhattan restaurant, Savoy) in the early ’90s, before it was even a thing — often raiding the Union Square Greenmarket for the day’s ingredients.

Since then, the term farm-to-table has been so overused as to glaze over many a diner’s eye, and is no easy feat in central Nassau County. Take a seat in one of Perennial’s minimalist rooms, however — either the spare front dining space or more laid-back barroom, both with cement floors and hanging bulbs — turn over the menu, and there it is: a list of cheesemakers and growers and fisheries that supply this kitchen, from Riverhead’s Coppert Kress (greens) to Happy Valley Meat Co. (pastured meat).

Mistretta and his team, including chef de cuisine Joe Shortt, cure some of that meat, pork belly, for several days — with spices such as fennel and coriander — and then crisps it until the outside crackles and the inside practically melts. Plated with tart slivers of apple, shredded cabbage and a vinegary mustard-seed sauce, it’s a smoky wonder, and absolutely the way to launch dinner here — along with some pillowy house Parker rolls, two for $3, served with butter that’s churned in the kitchen.

Despite the excellent house bacon, the chef lives not by meat alone: He recognizes that vegetables are gradually pushing beef, pork and the like to the fringes, and offers several memorable meatless dishes — such as tender roasted beets with a horseradish-spiked cream and punched up with grated citrus (from something called Buddha’s hand). Or, purple and gold carrots roasted to the apex of sweetness, then piled on pureed goat cheese and showered with hazelnuts. A salad of bitter greens, barely touched by dressing, are peppery and refreshing.

Two of Perennial’s pasta dishes are vegetarian, too, from a comforting cavatelli slicked with creamy pureed squash to an inventive cauliflower ragu, which forms a toasty, slightly crunchy “sauce” for spaghetti. For omnivores, a chunky maccheroncini is woven with pulled pork shank that tastes like it took a long swim through chili-spiked orange juice, then the whole thing is finished with a glob of ricotta to tamp down the spicy edges.

There are only a handful of large plates on the succinct menu, and among the best is supple monkfish on a bed of nutty beech mushrooms (sort of like enoki) and farro. Bay scallops carry a deep sear and come in a bright sunchoke puree, but shreds of kimchi slightly overwhelm the scallops’ delicate nature.

A daily steak “butcher’s cut” of beef was, one night, a blushing, fork-tender sliced rib eye with a moody crust and tomato-ey bearnaise sauce worth eating every last drop of; on another, sirloin tri-tips that were flat in flavor and slightly dry. If the kitchen isn’t serving a fattier cut of steak, roast chicken — a hunk of breast with skin so crisp it could almost shatter, and in another creamy sauce — is a succulent stand-in.

Perennial’s cocktails, created by bartender Harrison Chedd, are outstanding and mirror the kitchen’s botanical bent, such as the foamy sour called the Heart Beet (beet juice spiked with vodka, then gussied up with elderflower, orange juice and liqueur and a few beet greens). The rest of the drinks list is almost geeky and New York-centric, bouncing from excellent beers to four tapped wines — Bedell Cellars petite verdot among them — and a bottle list that reaches deep to the East End.

Unfortunately, for lovers of sweets, desserts are still a hot (or cold) mess, from panna cotta that was an unrecognizable clump one night (though had gained shape a week later) to disassembled s’mores (what’s with deconstructed desserts these days?) that resemble slightly charred cake balls riding a wave of heavy cream.

Despite that misstep, this is a chef, and kitchen, to revisit through the seasons, as the name suggests, for restrained but alluring cooking served to you by a kitchen, and a warm staff, that seems to truly care about what they’re doing.