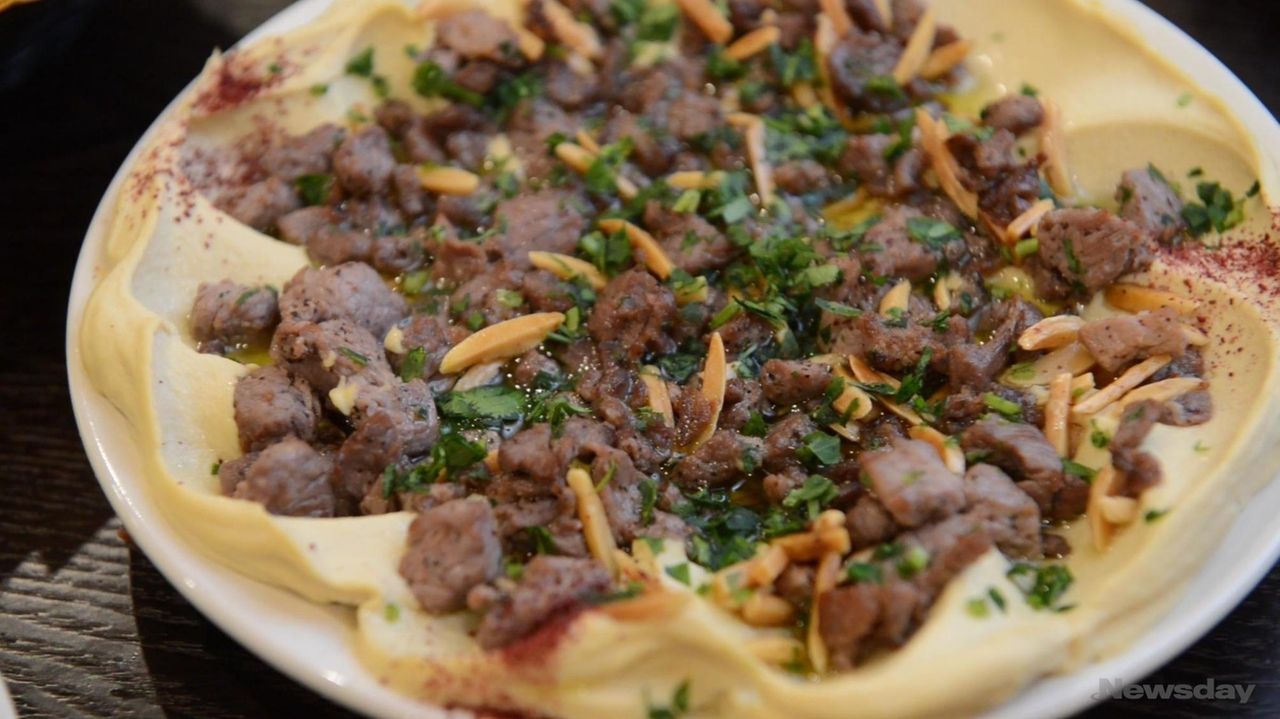 At Petra Grill in Carle Place, owners Mansour Al Hijazin and his wife, Nadia, both Jordanian émigrés, have with their daughter, Reema, brought the savory cuisine of that corner of the Middle Eastern to Nassau County. Credit: Daniel Brennan

AMBIENCE: Clean and bright, though the sprawling dining room detracts from the otherwise intimate vibe.

When’s the last time you were startled by hummus? The chickpea spread has become such a ubiquitous part of the American culinary landscape that it has lost any connection to the Levantine cooks who, centuries ago, had the genius idea to enliven ground chickpeas with olive oil and tahini (sesame paste), garlic and lemon juice.

At Petra Grill in Carle Place, I was brought up short by truly great hummus, smooth as room-temperature butter, a tangy, nutty symphony.

“This hummus, it is ours,” declared Mansour Al-Hijazin, who emigrated from Jordan with his wife, Nadia, as young adults. “Hummus comes from the eastern Mediterranean, from Syria, Lebanon, Israel, from Jordan.”

Pride of place is the essence of Petra Grill, which they, and the eldest of their two daughters, Reema, opened two months ago in Carle Place. Pride starts with the name. Eschewing fuzzy allusions to olive trees or kebabs, the family named their restaurant after Petra, the ancient city that is Jordan’s most famous site. Photographs of the rose-stoned ruins and other splendors grace the walls, but they don’t outshine what you’ll find on the tables.

The plain hummus is garnished with parsley, sumac, olive oil and tabileh, a sparkling relish of garlic, green pepper and lemon juice. But you can also get hummus with shawarma (meat roasted on a vertical spit) or, even better, savory nubbins of lamb. The meat-topped hummus is further adorned with toasted almonds and pine nuts, and may be the best thing I have eaten so far this year.

Pass up the perfectly good babaganoush in favor of the eggplant salad, translucent citrine with emerald and ruby peppers. And don’t miss tiny green makdous eggplant, each one pickled and stuffed with a walnut. Cauliflower is currently having a moment, sliced into thick slabs it’s drafted into service as a meat substitute, finely ground it tries to mimic rice. But I know of no better showcase than Petra Grill’s fried florets drizzled with sweet-sour pomegranate molasses and yogurt.

Fried haloumi, coins of the salty, squeaky cheese that have been seared to a nutty brown, is a refined take on mozzarella sticks, one that pairs perfectly with tabbouleh, the bracing parsley-bulgur salad.Lovers of Chinese congee will thrill to the freekeh soup, a porridge made with freekeh (young wheat that has been toasted into nuttiness) with bits of chicken and a strong backbeat of black pepper.

Except for the wan grilled octopus, all the meze (starters) were first rate. And unlike many Middle Eastern restaurants, Petra Grill serves beer, wine and liquor. A crowd of celebrants could do very well here with a tableful of meze and drinks to wash them down.

The menu has a section devoted to flatbreads, and the arayes lahmajeen (a sort of Levantine pizza) featured a matrix of ground meat, caramelized onions, pomegranate molasses and pomegranate seeds. But the crust itself had neither soul nor tooth, making me suspect that no one in the kitchen has a gift for baking bread. This also explained the workaday commercial pita, which the falafel sandwich wisely eschewed. Instead, the fried chickpea fritters, slathered with tahini were wrapped up in a pliant flour tortilla, burrito-style, and grilled. If only the sandwich’s tomatoes hadn’t been pale and tasteless.

If they didn’t achieve the heights of the starters, mains were solid. Shawarma, kebabs, chops and a whole branzino all reclined on platters piled high with basmati rice, one heap tumeric-golden, the other a pale russet and fragrant with cinnamon, cardamom and onions. Alongside the meat were grill-charred tomatoes, onions and pepper.

Desserts are homemade and taste it. Among the more unusual are graibeh, S-shaped butter cookies so tender that a sharp glance can crumble them. Harissa, coconut-semolina cake, is soaked in syrup and cut into decorous little squares. If it’s on the menu, don’t miss the aish el saraya, a pudding of toasted challah soaked in caramel then smothered with whipped cream.

Petra Grill’s Middle Eastern selections are vast, and I was confounded by the further inclusion of scores of American dishes — shrimp scampi, panini, burgers and cheesesteaks. The Al-Hijazins owned The Grill at Roosevelt Field mall from 1993 to 2014, and they appear to have brought much of their old menu with them. They may be trying to hedge their bets by broadening their offerings, and I sympathize, because the restaurant is huge — 130 seats spread over three dining areas. But food this good needs no hedges. It speaks for itself.