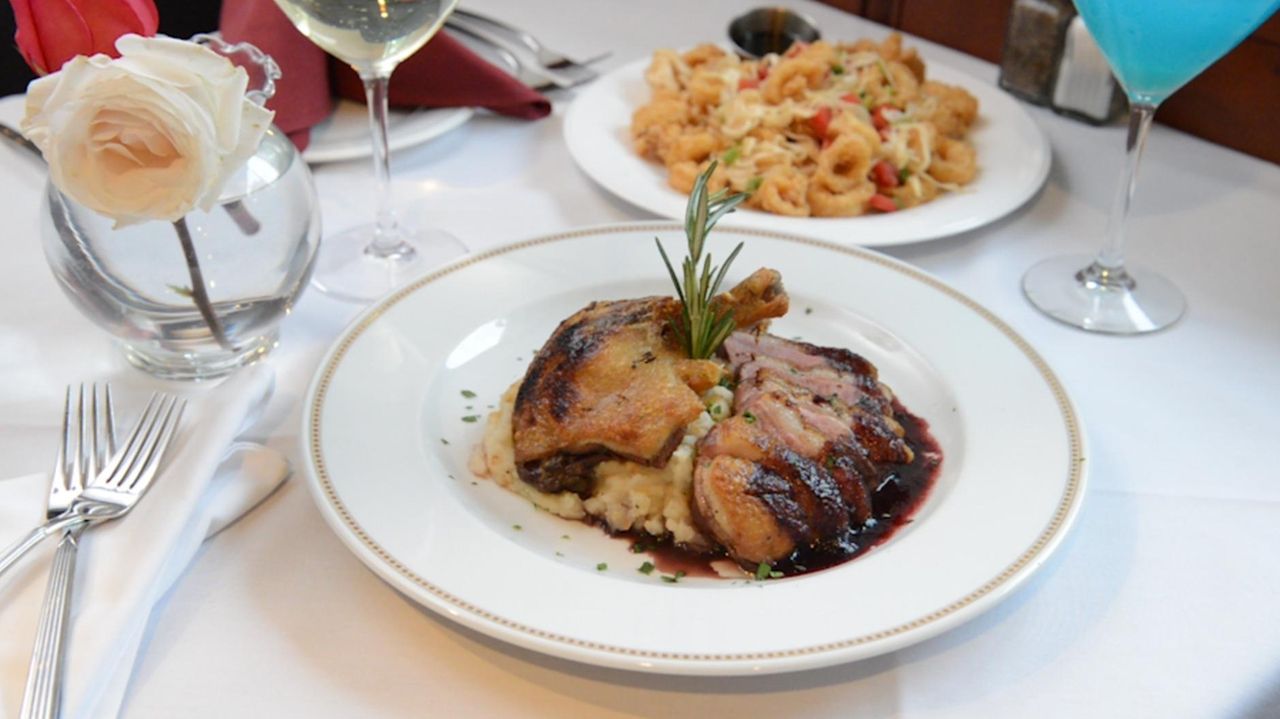 The Pine Grove Inn, first opened in 1910, closed after it was flooded by superstorm Sandy in 2012. It was renovated and reopened in 2016. The restaurant offers German cuisine, like wiener rostbraten and sauerbraten, along with a water view and outdoor dining. Credit: Daniel Brennan

Pine Grove Inn dates to 1910. And the main course is nostalgia.

No need to be concerned about the calendar or the century. Unless you revel in time travel, the years to remember are 2012, when the inn closed and was flooded by superstorm Sandy; and 2016, when the renovated and rehabbed restaurant reopened.

Dine outside for a pleasing setting on the serene Swan River. If you’re indoors, try to reserve a table with a water view. Otherwise, it’s windows-on-the-parking lot, paneling that would elevate any finished basement, assorted newspaper clippings in search of lost time, and artwork to ensure you’re never distracted from your plate.

The staff gives the reborn Inn some youthful energy, making up for inexperience with warm smiles and attention. You won’t feel abandoned.

For most of its life, Pine Grove Inn was a destination for German fare. But gone are the occasional roast goose and the regular herring salad, the standby Wiener rostbraten and the special prime rib.

What remains on chef John Goelz’s menu, however, is sauerbraten, which, while not the most summery dish, is well worth ordering now and remembering if you saunter in on a chilly fall night. The flaky Teutonic pot roast has a mild vinegary tang and the welcome company of red cabbage and potato pancakes.

The other main course that completes the entire category dubbed “Classic German Specialties” is Wiener schnitzel, the plain variety or a la Holstein, topped with a fried egg and an X of anchovies. A chewy affair with peel-away breading, it arrives with underdressed arugula and overweight dumplings.

You’ll prefer the New Zealand rack of lamb, tender and rosy, finished with a slightly minty demi-glace. That touch of pink is very welcome. Remember to order any meat rare or medium-rare because you’re pretty much assured the temperatures will be higher.

Accordingly, the hefty porterhouse is as gray as the flannel suit regulars wore in another era. You’ll have to gnaw on the steak. The thinner, porterhouse-cut pork chop definitely put in overtime in the oven and mandates a sharp knife. But that can’t cut through the shock-effect sweetness of the apple-bourbon sauce.

Instead pick the meaty, juicy duck breast and confit of duck leg, sporting a modest shine from its beach-plum glaze. The plump “oriental” duck wings, a trio sent out with wasabi-injected sour cream, are a satisfying appetizer.

That also goes for the crisply fried calamari, with smoked paprika and chipotle-shot aioli; or, better, with moderate, Thai-style chili spicing. The house’s tuna tartare seems revolutionary at this address, flavorful and velvety.

Lobster bisque hasn’t spent enough time simmering with the shells and the hue isn’t the deep coral of the classic. There are, however, nubbins of tail meat, and the soup delivers some richness.

And the risotto with scallops and shrimp, while starring tasty shellfish, never quite harmonizes. It’s just pasty rice and seafood.

If you’re on a very bland diet, there always are the baked clams, bready and dense, with the barest hint of shellfish. The crabcake is undone by too much breading. Take a less-complicated path: the respectable shrimp cocktail or the raw oysters.

An alternative opener is the beet salad with goat cheese, despite the intrusion of candied walnuts. No need to poke around the Caesar salad, which begs for those anchovies decorating the schnitzel, and more than a drizzle of dressing.

Nor is there any need to stick around for dessert, whether apple strudel that’s mushy, not flaky; or a brownie sundae that’s just dull. Ordinary cheesecake, too.

The search for a genuine Black Forest cake begins now.