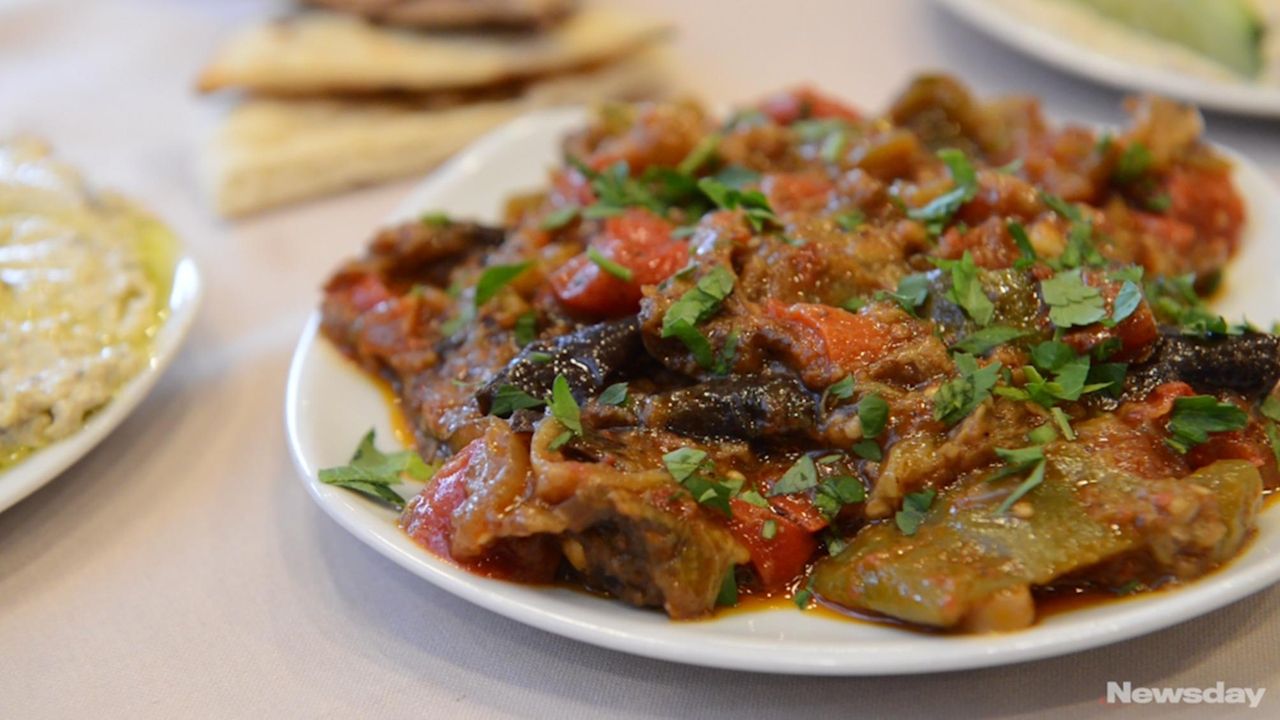 Pita House in Medford, which bills itself as "fine Mediterranean dining," is undoubtedly Long Island's most opulent Turkish restaurant. With a large, attractive dining room set with tablecloths and stemware, a granite-topped bar and a full wine list, its menu covers all the Anatolian bases, along with detours to Greece and the Levant. Credit: Daniel Brennan

Back in the day, eating “authentic” used to mean sacrificing comfort and refinement. The stereotypical “ethnic” restaurant was a barely decorated, vestibule-free room where the plates were paper, the drinks menu consisted of a self-serve refrigerator and English was in short supply.

Pita House in Medford, which bills itself as “fine Mediterranean dining,” is undoubtedly Long Island’s most opulent Turkish restaurant. With a large, attractive dining room set with tablecloths and stemware, a granite-topped bar and a full wine list, its menu covers all the Anatolian bases, along with detours to Greece and the Levant.

But if one of the restaurant’s virtues is its accessibility to Turkish-food novices, seasoned diners may find some of the dishes Americanized, as if owner Cafer Sahin didn’t trust his customers to fully appreciate the real Turkish deal.

Sahin was a pioneer of Turkish food on Long Island. At his first restaurant, the modest Medford Pitta, which opened in North Patchogue in 1993, he popularized such specialties as doner kebab (lamb roasted on a vertical spit) and bulgur (a form of cracked wheat). The tiny restaurant was renamed Pita House in 2002 and spawned a second, much larger Pita House in Setauket in 2008. The Medford Pita House opened in February, replacing — and more than quadrupling the size — of the original.

It’s not that you can’t get a fine meal here. You’ll never go wrong ordering eggplant in a Turkish eatery and, at Pita House, the baba ghanoush is a smoky, creamy dream. Fill out your cold starter selection with a lush dip of eggplant with tomato sauce and a shepherd salad — no lettuce, just chopped tomatoes, cucumbers, peppers and onion, dressed with fresh lemon and extra-virgin olive oil from Turkey.

The clear winner among mains is the Iskender kebab, one of the glories of the Turkish kitchen, where sliced doner kebab is heaped onto pieces of toasted bread, then drenched with yogurt and tomato sauce. At Pita House, it comes to the table sizzling in an embossed cast-iron pan with a hammered copper dome.

Lubricate your meal with one of Pita House’s reasonably priced wines (including a number of Turkish imports), beers (including Riverhead’s Crooked Ladder and Hofbrau on tap) or a bottle of raki, the anise-flavored Turkish equivalent of Greek ouzo. Finish it up with a velvety rice pudding.

While the dining room retains traces of its sports-bar past (the previous tenant was Long Island Ale House), it also features charming miniature paintings of the Bosporus and classical bas-reliefs. On Wednesday nights, a troubadour serenades in Turkish, Greek, Spanish and English; on Fridays, it’s classic folk-rock.

But when the music stops, too many of the dishes we tried here were carelessly rendered, lacking the deep savor and subtle nuance that they should have delivered in spades.

Most Turkish restaurants serve fresh pide, a puffy, dimpled flatbread that not only conveys, but enhances the dips, salads and soups, but Pita House serves pedestrian pita (unless pide is specially requested — which I learned too late). The beans in the bean salad tasted canned; the tabbouleh, devoid of lemon or salt, or much taste at all.

The spinach pie was soggy. I’ve rarely encountered a Turkish dumpling I didn’t like, but the manti here were tough-skinned, lukewarm and overwhelmed with yogurt.

Besides the Iskender, none of the other meat kebabs entirely satisfied — not the dry turkey doner nor the dry chunks of chicken nor the timid Adana. Both accompaniment options, bulgur and rice, were swollen from overcooking.

In 1993, any Turkish restaurant was a welcome development on the Long Island dining scene. In 2017 — thanks, in part, to Cafer Sahin — there are terrific Turkish eateries all over Nassau and Suffolk, and it’s time for the old master to up his game.