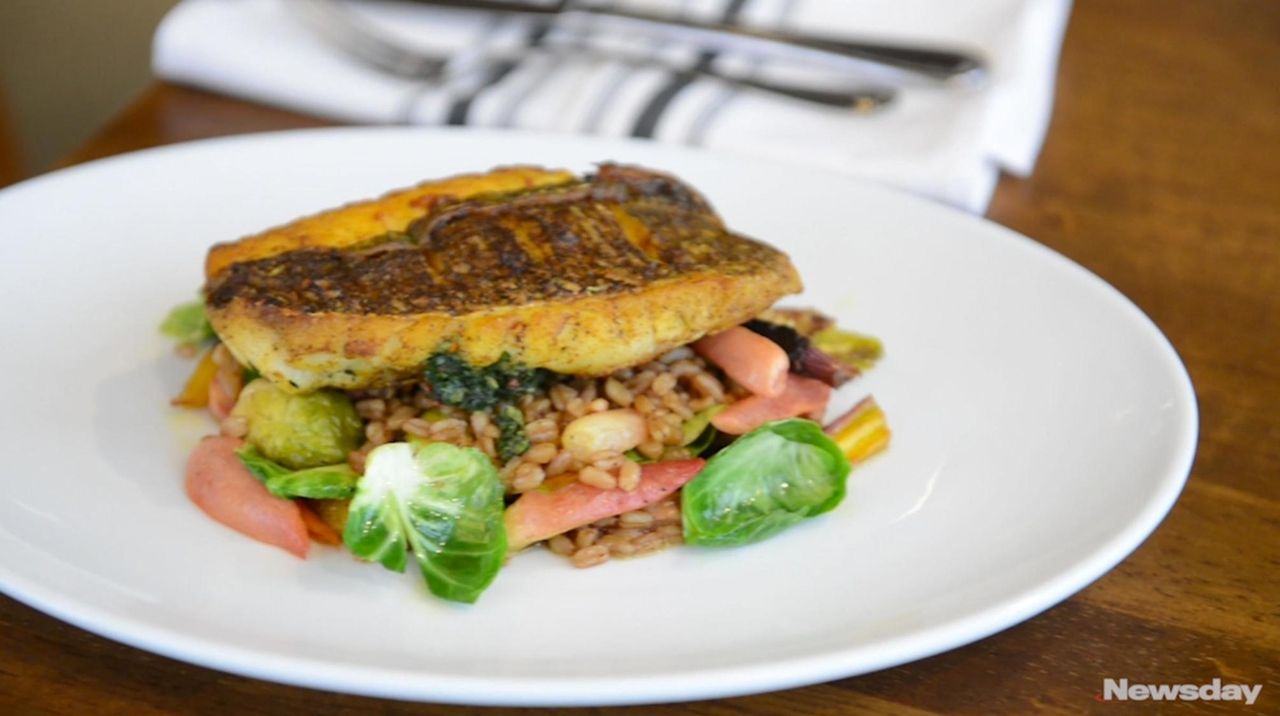 The Preston House and Hotel

Essentials: Open for dinner Monday, Wednesday and Thursday from 5 to 9:30 p.m.; Friday and Saturday 5 to 10 p.m.; and Sunday 4 to 9 p.m. Sunday brunch 11:30 a.m. to 2:30 pm. Lunch service to be added in May, and happy hour runs 4 to 6 p.m. through the week. Reservations recommended. Major credit cards accepted. Main floor is wheelchair accessible. Parking and entrance is at the back of the hotel.

All roads lead to Riverhead. Well, at least those that continue on to the North and South Forks. Yet in spite of its position as a geographical helm for the food-rich East End, it’s curious that Riverhead hasn’t yet become a dining destination in and of itself.

The arrival of the Preston House and Hotel early this spring may mark a sort of before and after. Chef Matthew “Matty” Boudreau, who has helped open or lead several East End restaurants, draws on a deep Rolodex of baymen, fishermen, farmers and food producers for poised, inventive New American dishes that ride the line between deference to ingredients and doses of mischief.

The Preston House wasn’t easy to track down at first. A banner tied to a fence out front served as the only sign, at least in mid-April. Eventually, we realized that the shingled, vaguely Victorian house with a wraparound porch and modernist structure jutting behind it was our destination. (It’s worth noting the hotel is directly across from the Long Island Aquarium.)

Once inside the back entrance, though, you may feel as if you have found treasure. Both the newer building (which is the 20-room hotel) and the historic house (which holds the restaurant) are stunningly appointed — from a sleek, minimalist lobby to a whitewashed restaurant cast in neutral tones. The effect is somewhere between Scandinavian farmhouse and beachside café, and manned by denim-clad hosts and servers who are relaxed and warm upon greeting, and intuitive and focused throughout the meal.

You can begin the night in the clubby bar, backed by mirrors, beset with syrups and bitters, and watched over by a slightly unsettling portrait of Henry H. Preston, Suffolk County’s first sheriff, who built the house in 1905. Though the restaurant has the requisite craft drinks list, the two cocktails I tried — one made with Earl Grey tea and gin, another mezcal-based — felt slightly cerebral and out of balance. I was happier with a bespoke drink, and later, a dive into the thoughtful, East End-heavy wine list. (There are 850 bottles in the cellar.)

Boudreau, who was once recruited by hotelier André Balazs to work at Shelter Island’s Sunset Beach and later, helped open both the Vine Street Café and Baron’s Cove in Sag Harbor, services a menu dense with seafood, from raw oysters (one night, briny Peconic Golds and creamy Montauk Pearls, with a punchy daikon mignonette and vibrant cocktail sauce) to a tuna tartare shimmering with citrus juices and delivered on a cloud of whipped avocado. His inventive version of clams casino — which eschews bacon for smoked Hungarian goat-horn peppers — is bound to become a house staple, even as the menu changes seasonally.

There is bacon, though — specifically, pork belly that’s cured for four days, air dried for one more, then braised, then cold smoked, then served glistening with fat and perched on a concentrated tomato jam. Yup, you should definitely try it.

You could fill up on small plates, snacks and sides here, such as slivers of toast slathered in bitter-orange marmalade and melted Beaufort cheese, or gently smoked, whipped feta with grainy crackers, or a side order of Gorgonzola-laced white polenta that tastes like a DJ remix of a familiar song. There were a few flat notes, though: Fried artichokes were tough and kinda dull, and an appetizer of calamari, served piping hot, was chewy and tumbled with an awkward combination of green olives and roasted beets.

It pays to leave room for the mains, such as the daily “nice piece of fish” which, on one night, was succulent black sea bass with papery-crisp skin and a ribbon of minced herbs, somewhere between chimichurri and pesto, draped across the top. The fish was magnificently cooked — unfortunately, the Brussels sprouts underneath were chewy and distracting. A better fit might have been the dreamy celery-root puree that comes underneath seared Shinnecock sea scallops (another entree) that are crisp-sweet on the outside, yielding inside.

The apogee of the menu, at least for me, was falling-apart duck confit, two legs’ worth served with a mound of kumquat chutney for tangy pops of sweet and sour. A close second: peppery seared strip steak atop mandolined celery root noodles (celoodles?) that feel like the most original thing on Earth when you’re eating them.

Boudreau is backed by some familiar faces — sous chef Abraham Susser, with whom he has worked for years — and pastry chef Maribel Ochoa, whose dense Basque burnt cheesecake with Meyer-lemon curd is a must before you peel yourself away from the Preston House, likely vowing to return.