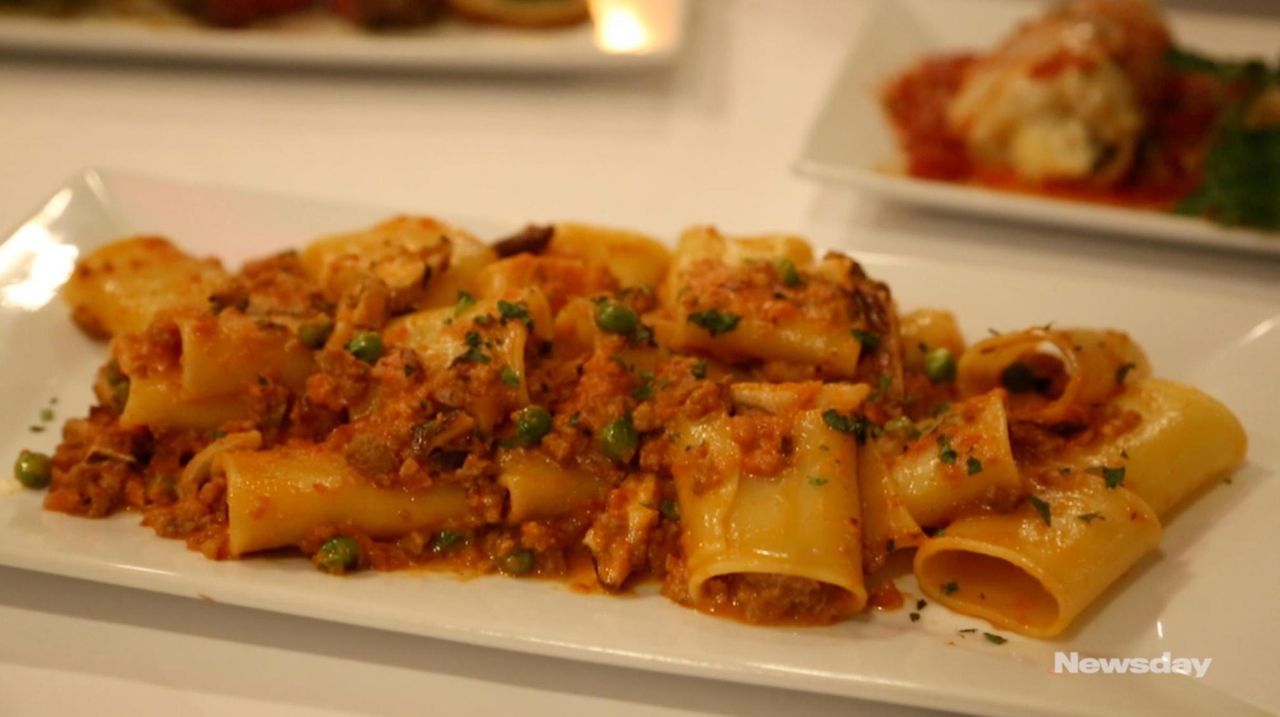 Puglia’s Italian Steakhouse is a family-owned-and-operated restaurant in Seaford that combines juicy steaks to compete with a familiar repertoire of dishes from chicken Parmigiana to linguine with clam sauce. Pasta chef Jamie Alvarenga goes through the steps on how to create a Puglia specialty, paccheri alla piselli pasta. Credit: Yvonne Albinowski

This is the offspring of Puglia in Manhattan. The family-owned-and-operated restaurant travels east on a red sea of sauce, and southern Italian and Italian-American favorites. Some dishes from the Hester Street landmark reach Seaford. The openhanded, welcoming style does, too.

Owner Greg Garofalo, who also operates the nearby Lobster Shack just west on Merrick Road, adds juicy steaks to compete with a familiar repertoire of dishes from chicken Parmigiana to linguine with clam sauce.

Even if you haven’t eaten here before, you’ve eaten here.

What counts, however, is that almost all the robust food is easy to recommend. Founding father Gregorio Garofalo’s rustic, full-flavored approach continues, even without the mainstays of trippa, as in tripe; and capuzzelle, or lamb’s head, which were served with homemade wine.

The scion opens brightly lit and neutrally hued, decorated with a few modernist paintings as well as longhorns above a built-in electric fireplace. On a Saturday night, the dining room is festive and noisy, already packed with regulars who’ve dined on Hester Street; others who remember the departed Il Felice restaurant. Sparkler-style birthday candles light things up now and then, accompanied by earnest singing staffers. Lots of hugs, plenty of laughter in the dining areas.

And all evening, you can hardly hear Dean Martin in the background.

It’s smart to go with a group, small or large, to share a well-made hot antipasto, starring the eggplant rollatini, baked clams and shrimp oreganata you’ve been looking for. Be sure to slice into the chivalini wheel of sausage with peppers and onions, reminiscent of a street fair or at least an aromatic backyard barbecue. Nibble on fried or sauteed calamari, taste terrific meatballs with ricotta and marinara, and a generous rice ball showered with Parmesan cheese. Several openers identified by street names: Mulberry, Broome Mott, Hester. You could add Grand. Only the sizable stuffed artichoke can be overcooked and dry.

Naturally, Puglia’s prepares the paradigm of linguine with white clam sauce. You’ll clean the plate with very good bread. Also, go for paccheri, a tubular pasta from Campania that’s similar to XL rigatoni, tossed with pancetta, peas and shiitakes, in a velvety pink sauce. Rigatoni alla vodka, as usual, does restrain the excitement. Cavatelli stands out even if the crumbled sausage and broccoli rabe don’t. On Sunday only: Sunday sauce with beef braciola, meatball, sausage and pork, on cavatelli, rigatoni or penne.

Specialties include a husky pork chop with both mild and hot cherry peppers; ample chicken and veal Parmigiana; and light, fresh, expertly sauteed flounder oreganata. A bit overorchestrated, chicken stuffed with smoked Gouda and spinach rests on sweet potatoes, and is sweetened even more with a balsamic-fig reduction.

The steakhouse portion of Puglia’s is the priciest, but dependably excellent. Each cut is dry-aged and tender. And the 16-ounce New York strip steak is ideal. But the showcases are a 36-ounce porterhouse and a 42-ounce tomahawk rib eye for two. On request, you can bring together the two strengths of Puglia’s with a savory steak alla pizzaiola. The better side dishes are garlic mashed potatoes and roasted peppers and onions. Skip the creamed spinach in favor of the sauteed.

For dessert, you can be traditional with a satisfying tiramisu, cannoli or chocolate profiteroles. But the dark chocolate layer cake, described as a “tower” for two, is the peak. Among the hearty Italian restaurants that extend along the South Shore, so’s Puglia’s.