SERVICE Attentive and happy to help newbies with ordering

AMBIENCE Clean and bright but personality-free

ESSENTIALS Open every day from noon to 10 p.m. Parking lot.

Long Island has made great strides since the days when every Indian restaurant had the same menu of chicken tikka masala, saag paneer and garlic naan. Hicksville has become home to a subcontinent full of eateries, from the Northern Punjabi “roadside” cooking at Papee da Dhaba to the Southern vegetarian cuisine of Saravanaa Bhavan.

And now we have Raju’s Egg & Veg, specializing in Gujarati egg dishes. Your local diner does not evince one scintilla of the creativity that Raju’s brings to bear on the incredible, edible egg.

Raju’s Egg & Veg is the first American outpost of Raju Omlet, founded by Rajubhai Rana in Vadodara in the Western Indian state of Gujarat. “Rajubhai,” as he is familiarly known, started with a handcart in 1982 and now presides over a dozen locations in India, Dubai, Kuwait and Australia.

Prashant Shah, who owns Manhattan’s long-standing vegetarian Indian restaurant, Vatan, decided on a trip back home to Gujarat to bring the restaurant to New York. In April, he and partner-chef Vijesh Patel took over the short-lived Chawlas 2 on South Broadway and even brought over Rajubhai to help launch the new venture. 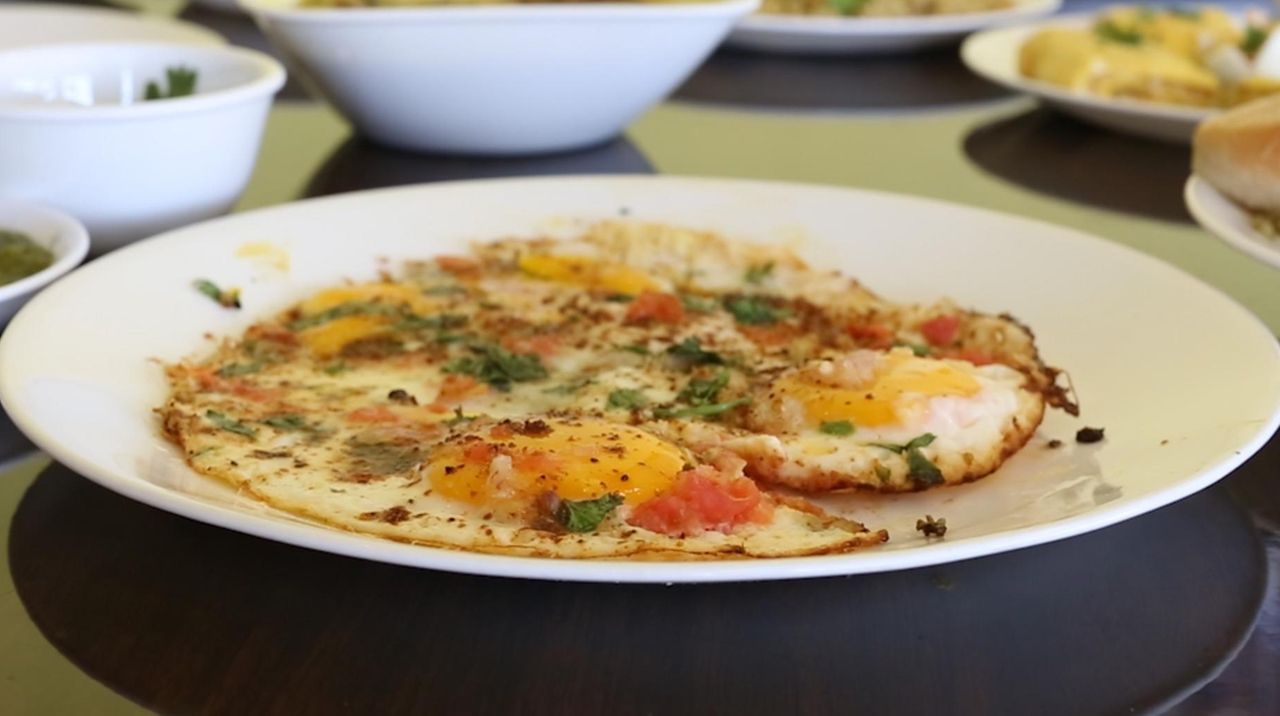 Making a masala half fry at Raju's Egg & Veg Raju's Egg & Veg, a fascinating new restaurant in Hicksville, is the first American branch of an Indian chain specializing in egg dishes from Gujarat. Credit: Yvonne Albinowski

Raju’s serves more than two dozen egg dishes, and my first reaction to the menu was shell shock. But gradually I began to perceive that almost every dish fell into one of four categories: hard-boiled, omelet, scrambled and sunny-side up.

So-called “boil” dishes feature eggs that are boiled, sliced, then floated in sauce (here called gravy). The restaurant’s signature dish is butter boil tikka, whose deep, rich sauce is a tomato red, onion-and-ginger sweet, with a mellow heat from red and green chilies and the house’s signature “eggstraordinary” masala spice blend. I have never eaten anything remotely like butter boil tikka, but now I don’t want to stop. Just as good is the green boil tikka, whose green sauce sings with the freshness of mint.

Omelet dishes entail a thin, flat omelet that has been folded around a savory chili-garlic-ginger-masala filling, then cut into squares. I loved every one I tried, but give the nod to the fennel-seed spiced omelet, whose filling had that extra jolt bestowed by fennel seeds.

You can further electrify anything at Raju’s with a dollop of the mint chutney, undeniably spicy, but balanced by a hint of sweet. That chutney is the soul of the green pulav, a deeply verdant rice dish whose spice is softened by, you guessed it, chopped eggs.

“Bhurji” dishes are eggs scrambled with onions, green chilies, garlic, ginger and that eggstraordinary masala, plus any combination of chopped tomatoes, cheese, basmati rice or even chopped eggs, here called “crush.” These curds are finer and somehow less yellow-eggy than American scrambles, but are every bit as comforting.

“Half-fry” is the charmingly accurate descriptor for sunny-side up eggs, and Rajubhai could probably have succeeded if his restaurant served only masala half fry, trembly yolked eggs strewed with fresh chilies, tomato, garlic, ginger and masala.

Sometimes you’ll find more than one egg style in a single dish, as in the eggs-plotion/volcano biryani (not on the menu but always available), wherein an omelet is topped with sliced boiled eggs, then basmati rice, then chopped egg, then shredded cheese and, finally, by a lava of red gravy. (Where, I wondered, was the half-fry egg crown? File under missed opportunity. Also egg-cessive.)

About that shredded cheese: Raju’s is a little in love with it. Paneer, a simple, fresh cheese that can be made at home, has been part of the Indian diet for thousands of years. But shreddable, American-style mass-produced cheese is a relatively new development. It wasn’t until the 1960s that Amul, the Gujarat-based dairy cooperative that is the world’s largest milk producer, figured out how to produce it without animal rennet in order to make it acceptable for Hindu vegetarian diets.

Shredded Amul-brand processed cheese, wildly popular in India, figures in about a third of the egg dishes, and Raju’s helpful waiters seemed very keen on it. But I found that cheese blunted the strength and clarity of the dishes — and overwhelmed the eggs. I’d steer clear.

Then there’s the bread issue. Most of the saucy dishes are served with an Indian bread called “pav” that, to me, looked and tasted exactly like butter-toasted hamburger buns. I live in fear of stepping outside the boundaries of traditional foodways, but I took the unorthodox step of ordering a couple paratha (flaky, layered flatbread) to sop up extra sauce — because you definitely do not want to let it go to waste.

None of the appetizers or non-egg dishes we tried achieved true excellence. Samosas (fried vegetable dumplings) were huge and ponderous, both the yellow lentil dal and paneer tikka (fresh non-Amul cheese in an oniony-tomato sauce) lacked complexity.

The dining room, essentially unchanged since Chawlas 2’s departure, bears only one distinctive touch: framed Indian newspaper articles chronicling the glorious history of Raju Omlet. The Hicksville location deserves to be the next egg-ceptional chapter.