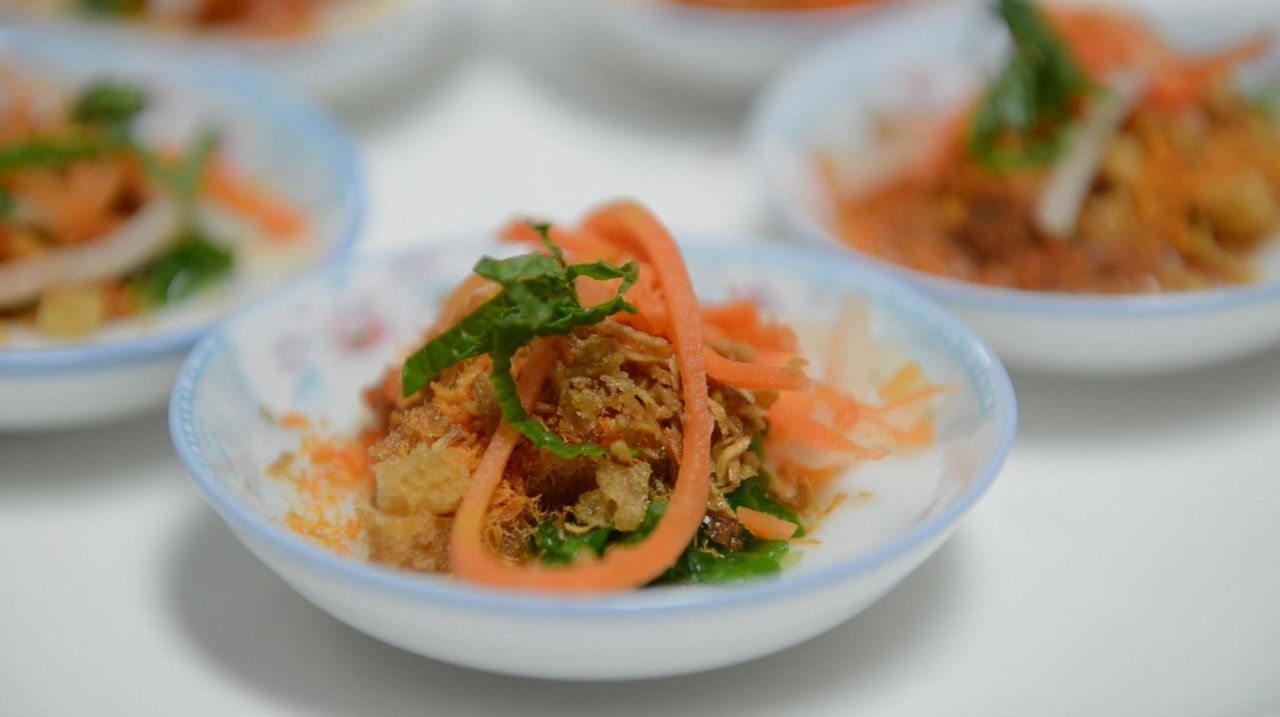 SERVICE: Cordial and conscientious, with a willingness to guide you gently

AMBIENCE: Sleek, jewel-toned and slightly outmoded, with a glossy but austere bar

If there was a heat map of Asian cuisine on Long Island, Vietnamese food would register as barely a blip. Kung pao chicken, sushi or tom yum soup are a snap to track here; summer rolls, phô and banh mi, not so much.

Jackie Nguyen and Justin Trinh recognized this as an opportunity after moving to the Island a few years ago from Seattle, where they owned a Vietnamese eatery. In April 2017, they found a place for an East Coast redux: a shuttered Asian fusion spot in a Port Jefferson Station strip mall with dark purple walls, cherry-red booths and a glossy, austere bar. Those they left mostly untouched. Instead, the couple (along with two other partners, Steve Nguyen and Trina Duong) put their efforts into the often electric dishes of their homeland, where salty, sweet, sour, bitter, spicy can ping the tongue in one sweeping kick and snap you to attention.

It makes for adventurous and occasionally restorative eating, greaseless and devoid of dairy (instead, coconut and tapioca add creamy textures). There’s another beguiling influence at work, too, stemming from France’s century-long colonization of Vietnam, which ended in 1954 and imbued the local cuisine with French touches such as meat broths, pâté and crepes. A poster child for this marriage of styles is banh xeo, a giant rice-flour crepe tinged gold from egg yolks, charred all over from fast and furious griddling, and harboring shrimp, bean sprouts and flaps of pork. It’s meant to be broken apart and rolled into lettuce leaves along with Thai basil and dribbles of sauce; it simultaneously charges and cools the palate.

Another solid jumping-off point is goi cuon, aka summer rolls, whose sticky, transparent rice-paper skins give way to crunchy shredded lettuce and (at least in the version called goi cuon nem nurong), a slab of warm, garlicky fermented pork sausage.

Salads — one of julienned lotus root and another of sliced papaya, both dotted with shrimp and pork and showered with ground peanuts — are refreshing but forgettable. Instead, consider banh beo, or “floating cakes,” floppy disks of steamed rice dough topped with a pungent mince of fermented shrimp. Dribbled with chili-laced nuoc cham, each bite seethes with heat and hums with coconut.

Banh mi, those signature Vietnamese sandwiches, come on toasted hoagie-type rolls stuffed with cucumbers, shredded carrots, slivered jalapeño and your meat (or meats) of choice; the grilled beef that filled one version was parched, however, and our quest to try another layered with the classic pâté-and-cold meat combo fizzled when the kitchen ran out of bread.

Chef Kevin Nguyen simmers the beef-based broth for Saigon Casa’s phô, or Vietnamese noodle soup, for 20 hours; it’s then loaded with meat, a tangle of rice vermicelli and flotillas of cilantro and scallions. Phô dac biet cinches together a generous portion of almost all of the meat on offer — rubbery strips of tripe and soft nuggets of beef tendon, plus meat balls and floppy flank steak. The broth is almost floral, with a haunting trace of cinnamon, but so delicate that you might spritz over lime, Sriracha sauce (there’s a bottle on every table) and Knorr Liquid Seasoning (ditto) to kick things up a notch.

Bún, a bowl of rice noodles, shredded iceberg, sliced shrimp sausage and chopped spring rolls, looks and tastes as if a summer roll exploded into a bowl. I preferred Saigon Casa’s rice dishes, such as briny fried rice threaded with tilapia or a bone-in pork chop marinated in fish sauce and then grilled to succulence. Called com suron nurong, it comes with a mound of rice, sliced cucumbers, shredded carrots and more of that fishy dipping sauce. Try to get each one on the fork for maximum voltage.

The abandoned look of Saigon Casa’s bar is a tipoff to cocktails here, all of them sweet and fruity. Singapore-made Tiger lager is a better fit for this food, as are creamy avocado or mango smoothies or sweet, cold Vietnamese coffee.

Whatever you order, it will come quickly, without much of a nod to pacing, but via courteous servers willing to lend their advice. You might call on them as you puzzle over desserts which challenge your preconceptions of what dessert can actually be, whether che chuoi — a tapioca pudding harboring chunks of banana, shredded coconut and tapioca pearls — or che three mau, alluvial layers of green-tinted gelatin, mashed mung beans, whole red beans and coconut in a pint glass. It’s not for the timid.